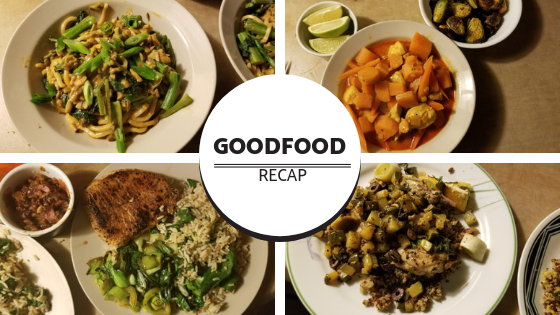 We took a little break from the normal cooking so managed to order in 2 boxes this month for Goodfood. We’re definitely enjoying it while it lasts because if I remember correctly, we will be skip for the next month or so. This box has been some really interesting meals and to be honest, I saw most of them as being fairly successful. 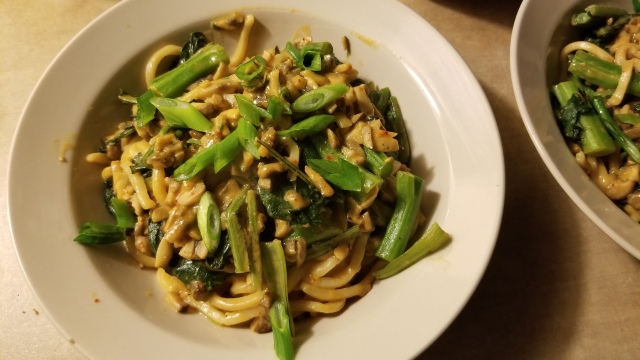 The last Dan Dan Noodles weren’t awesome. I’m going to be honest that they weren’t but this one tastes fantastic. The two types of mushrooms used and the yu choy as the veggie base with the noodles and the sauce all turned out so great. I really enjoyed this noodle bowl a lot. 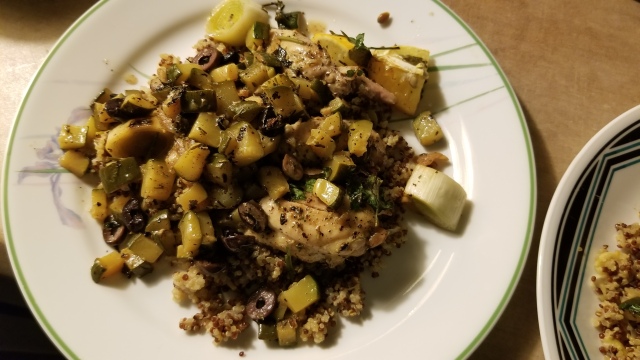 We rarely cook with quinoa unless its for one of these boxes so its always refreshing to eat it. Its something that I have thought about incorporating more into our lives outside of these meal boxes. This meal was pretty good in general. Chicken thighs are always super tasty to eat but then my biggest issue with it was the olives and that is based on preference as I don’t like olives but my husband loved this because he loves them and loves everything else about it. 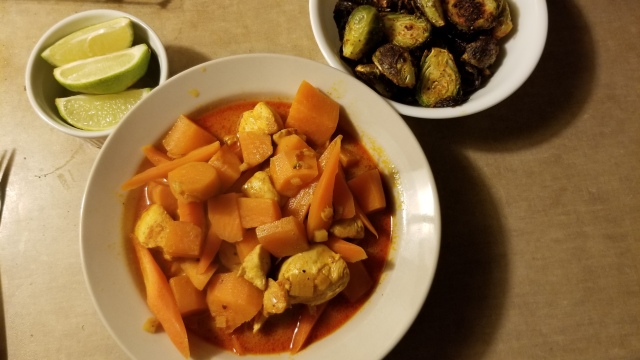 So..this meal was considered somewhat of a fail on my part. I’m not sure if I just didn’t follow the recipe properly or the recipe didn’t quite work with my appliances but this meal took about 3 times its estimated time. Usually for me, if there’s more cooking involved, it might take almost double the estimated time. It tastes pretty good and stews are always very comforting to eat. The idea of coconut milk base and then having carrots and sweet potatoes is really nice as well. It just was an incredibly long time to cook..oddly. 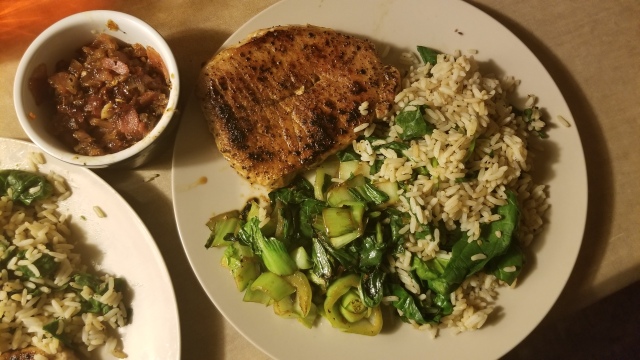 Welcome the star of this box. This meal is amazing! For one, the maple bacon jam is awesome. Literally, the best thing I’ve made from these boxes. Then the pork chops turned out good and paired with the jam is delicious. I like the spice blend that was mixed with the rice and the spinach. Then there’s the bok choy which always was great. I love this meal so much.

That’s it for this recap!
It was a pretty solid batch of meals.
It should be a month or so before we get another one of these boxes.
Just because of selection and time conflicts.

Last weekend, one of my good friends dropped by and gave me some meyer lemons.  If you don’t know what they look like, think of a mandarin orange shaped in a lemon.  I’ve never actually seen it before, or maybe I have but I never paid attention to it.  Still, I had to figure out what to do with it.  Apparently, after looking through a lot of recipes, meyer lemons has certain pros and that includes its thin rind and lower acidity.  I like that 🙂

After some searching on Pinterest, it was a decision between this coffee cake recipe to meyer lemon madeleines.  Only deal was I’d have to dig out my madeleine pan which is already packed away for the move and I was going to dig through that.  Well, maybe I will on the weekend, since I gave me the desire to try out making madeleines which looked so much easier than this. Coffee cakes are time consuming, my friends. 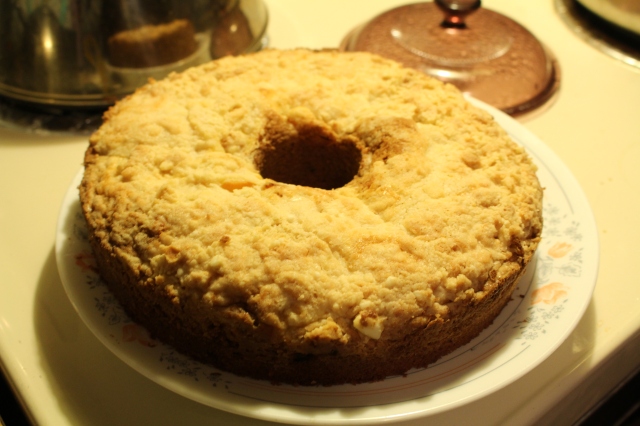 Fresh out of the oven!

Here is the link to Martha Stewart’s recipe that I used (with a few modifications as usual):  http://www.marthastewart.com/344357/meyer-lemon-coffee-cake 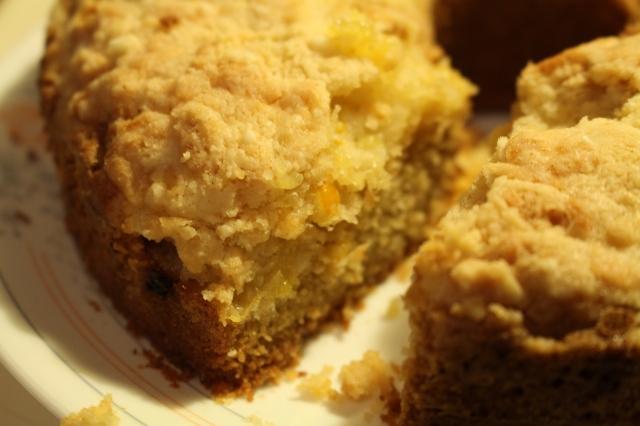 You can sort of see it here but there is layer of lemon slices right under the streusel.  There should have been a middle layer of lemons but as I only had 4 lemons to work with and after experimenting cutting the first one, it pretty much turned into more juice than salvageable lemon, I only had 3 when the recipe asked for 5, so sacrifices had to be made. 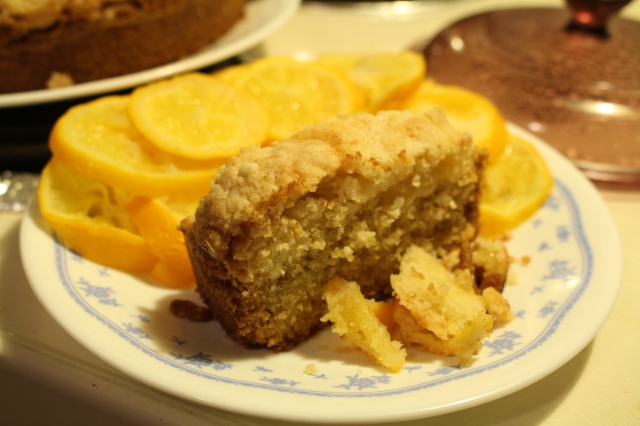 This recipe is so time consuming.  The preparation work is endless.  Thank goodness I had a movie playing in the background for noise because I didn’t really get much of what was going on.  If you click through to the recipe, you’ll notice that there is multiple phases for this coffee cake. Maybe its time we check out the modifications at the same time.

The first step is the streusel and I had to make modifications because I didn’t have brown sugar or more like, mine got squished in the cupboard that it turned into rock hard brown sugar, so I had the “genius” idea of using powdered sugar.  Probably shouldn’t have done that.  At least after the baking session, it looked light brown and not white.  I’m already relieved.

Second step goes to the lemons and the simmering.  I’m not a pro at simmering but it was alright, I laid them out on the parchment paper to drain the water a bit while I went off to mix the final cake batter, our last step before putting it in the oven.  There aren’t a lot of modifications here.  The one thing was that I used 1 teaspoon of salt instead of 1.5.  Also, I omitted the sour cream (lactose-intolerance) but seeing as the mixture was too dense, I mixed in a bit of water, maybe half a cup or so and it helped quite a bit.

I’m sure you’re all waiting for me to finally get to the point and tell you after all the modifications whether it would be good.  First things first, my house smelled delicious at 1:20am EST when this came out of the oven.  Oh my goodness, it smelled awesome and you know what? I may have had batter issues but with the few modifications, it still turned out pretty good. Not too sweet, because I didn’t use all the streusel topping (remember I used powder sugar instead) but also, not dry either.

Coffee cakes may be a pain to make but it was fun also. Plus, the end result makes it so worth it 🙂

What type/flavor coffee cake do you like? Do you know any other recipes for meyer lemons?

Also, Spring is just around the corner (in a month or so).  What baked goods do you like to eat during spring.St Patrick’s/Easter? So many special days/events around the corner! I can’t wait to leave this cold behind and surrounded by warmth 🙂