The Serpent-Bearer and the Prince of Stars
By: C.S. Johnson

A prince that changes everything.

Ophiuchus is a celebrated warrior of the Celestial Kingdom and a warrior among the Stars. He has been always been a dutiful servant of the Prince of Stars. So when the prince asks him to watch over the crafty serpent, Naga, Ophiuchus agrees. But as time passes and discouragement—both from Naga and others—Ophiuchus wonders if the Prince of Stars was right in asking him to take on the burdens of his task.

Will Ophiuchus honor his duty, or give into his heart’s weariness?

The Serpent-Bearer and the Prince of Stars is a fantasy graphic novel set in the world of the zodiacs. This story is about Ophiuchus who doesn’t only have the feud of the rest of the zodiacs against him for one reason or another but also the Prince of Stars has burdened him with the task of monitoring Naga, a deceptive serpent who constantly is in disagreement with him. Naga is representative of the evil in the world or perhaps on a lesser note, simply a disapproving negative thoughts that become a burden over time. Through the 30 pages or so of this graphic novel, the story brings together the obvious comparison of the story’s literal burden to the heavier mental burdens surrounding a person and whether and how to let it go. That message alone is the worthy of a lot of value as it instills the positives and has Ophiuchus, struggling to let go of the burden and even embrace the positives and freedom.

With that said, to be able to deliver fairly engaging characters, especially Ophiuchus and Naga as well as The Prince of Stars all give this fantasy a nice depth and development. Its only 30 pages so both the pacing and the execution are tight. It has a lot of other characters, the rest of the zodiac notably, but they only pop in with their random thoughts and opinions. Its gives their character context and all it really does need to do.

Simple as it is, quick as the story flows by, the animation is nice but not quite at its full potential. The writing style also still has a bit of improvement to flow some dialogue better. Its not exactly manga but the fantasy elements do give it that extra perk. It also lacks a little to be a full-on graphic novel, perhaps its the art style or the story style itself. It sits in the middle. It would be nice to see C.S. Johnson take on more of these while trying to commit to either or of the styles. Still, the ideas and creative aren’t to be dismissed and it will be interesting to see what works are in the horizon.

C. S. Johnson is the award-winning, genre-hopping author of several novels, including young adult sci-fi and fantasy adventures such as the Starlight Chronicles, the Once Upon a Princess saga, and the Divine Space Pirates trilogy. With a gift for sarcasm and an apologetic heart, she currently lives in Atlanta with her family. Find out more at http://www.csjohnson.me 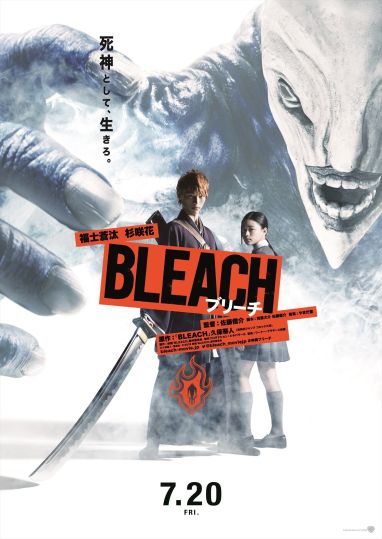 For anime lovers, Bleach has been a long time in the making. It has an incredible amount of episodes in the original series itself and that isn’t counting the animated movies derived from it alone. However, even if you have no knowledge of Bleach from its source material, this live action adaptation starts at the beginning. It tells the story of a teenage boy called Ichigo (Sota Fukushi) who loses his mother at a young age and can see ghosts. Nearing the anniversary of his mother’s death, his sister is attacked by a being called a Hollow and a soul reaper girl Rukia (Hana Sugisaki) from the Soul Society comes to his rescue. In battle with the Hollow, she ends up being injured and out of desperation despite the strict rules, she notices his high spiritual powers and transfers her soul reaping skills to him. While he defeats the Hollow, she transfers more than she intends and turns into human form forcing her to become his classmate while she trains him to be strong enough to return those powers.

Starting from the beginning of its source material may be the saving grace for Bleach. In this way, they manage to pull of a film that introduces its audience to the world through the eyes of Ichigo as he first encounters it himself. Of course, there is still a lot to learn about Ichigo himself from how he lost his mother to how he can see ghosts, although the latter along with the high spiritual power elements are more of a between the lines connection. Even with 2 hours, Bleach merely skims the surface in demonstrating this world that has been built. Soul Society doesn’t get touched on a lot except for that one rule and the two men, Byakuya (Miyavi) and Renji (Taichi Saotome) who show up to track Rukia, on the other hand, a member of Quincy, Ishida (Ryo Yoshizawa) pops up which gets a brief backstory to his purpose with pursuing Ichigo. Lots of information to digest here and it is no surprise that the script chooses to bring in these characters to build up the main story. In some ways, it works out because the main story revolving Ichigo brings in family, ties into his history and ends up developing his character quite a bit. On that note, Fukushi takes the role and runs with it in a spectacular way. His portrayal gives Ichigo so much charisma that it’s hard to look away from what he goes through. Luckily, this approach keeps the story contained, and at the end of the day, the movie takes the step to wrap up the story as it ties up all the loose ends.

Bleach has some charms and some minor issues. In terms of charms, it does feel like you are watching a live action manga. The characters have the goofy manga reactions and in the live action version, it creates a lot of comedic moments to cut through the tension of fighting the mystical unbeatable Hollow. It even throws in some explanation in manga drawing form to probably give it some link back. The Hollow itself is some good CGI work there. The action is done fairly well and the weaponry is replicated really nice albeit some obvious CGI work as well. The best part of Bleach is the score and soundtrack. It is energetic in the hard rock music way that blends so well with the tone of the film as a while. However, its minor issues lie in the pacing where the middle lags a bit in development and sits are a weird transition point that takes a while to get there. Because of some lack of depth, some characters here feel disposable as their purpose feels merely to achieve something or another. That is price of placing the focus on the main story but only skimming the surface of the other arcs. However, this is a movie and the effort to keep it contained is admirable especially with how much Bleach has grown since it was first created. It is still an entertaining fantasy action adaptation that does a lot more right than it does wrong.

This review was posted also on That Moment In.

All the unboxings are coming up again! Ever since I got that Nerd Block Grab Block one before, I get the newsletters for these things and although I’m not a frequent Nerd Block subscriber, I had to get this one because the key item here was My Neighbor Totoro.  If any of you  have been around here for a while, you’ll know that I LOVE Studio Ghibli and Hayao Miyazaki and possibly my favorite animation in the whole entire world has to be My Neighbor Totoro.  So I got that email and went to get it right away.  Toss the budget out of the window, who cares? Haha! I do care but the damage is not that bad so its okay 😉

Let’s open this one! Nerd Blocks and Arcade blocks don’t normally have themed months but this month they did and it was Ani-may! 😉 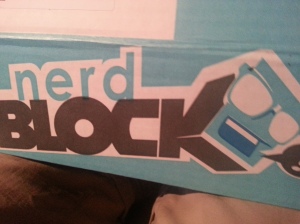 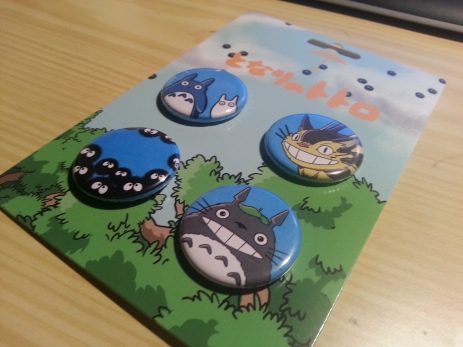 First goodie to come out of this was the reason why I ordered this block in the first place.  I was getting a little tired of pins but any gear with Totoro is a win for me.  They are absolutely adorable and it’ll probably go straight onto my duffle bag 🙂

Did I ever tell you that I used to love reading mangas? I had my Cardcaptor Sakura, Fushigi Yuugi and Imadoki phase with some of the more memorable ones that I own and still read once in a blue moon.  So here we are, I’ve heard a bit about Evangelion before so I’m pretty psyched that we FINALLY got a book in one of these blocks.  This is really cool, especially when its in ENGLISH.  They usually are just available in French back when I used to read these. I’ll do a little review on this when I finish up with this one 😉 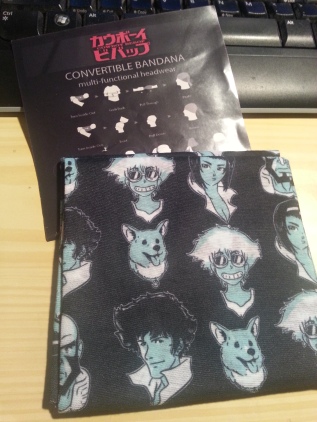 This item is the one which had me scratching my head a little. For one, Cowboy Bebop, never heard of it. And two, what the heck is a brandana? Apparently, its a convertible bandana and there’s like 16 different ways or something to use it.  I’m not sure what to do with it just yet.  But it could be useful… in time 😉

I have no idea what Attack on Titan is but the simplicity and dark green shade of this cinch bag works for me.  I can definitely use something like this.  It sure beats having to use a purse or a big messenger bag that I use for work.  It’ll have its use for sure especially when I’m going out for photo shoots or quick trips out. Plus, how nice is that design, right? 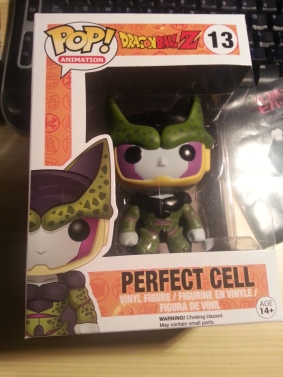 Dragonball Z!!! There is really no other words to describe my reaction to this! It was pretty much part of my childhood.  I don’t quite remember the names of some of the characters but it is an iconic show and probably one of the first to break into North America.  Plus, because of these mystery boxes, I’ve been really into collecting Funko Pop! figurines so double happiness!! 🙂

It may sound kind of crazy but my boyfriend and I both sat around trying to figure out where this was from before looking at the description card. Gundam Wing is pretty much a huge phase in anime world also.  This shirt looks really great and probably one of the more slick and serious ones.  I’m happy about this one also! 🙂

Overall, this box was really awesome! I was a little skeptical on the theme anime but it turns out I’m not so bad on this after all.  I mean, Totoro, Gundam, Dragonball Z; Funko Pop!, buttons and manga! Its absolutely cool. Maybe not enough to do a permanent Nerd Block subscription just yet but I’ll keep my eyes out for any fun themes.