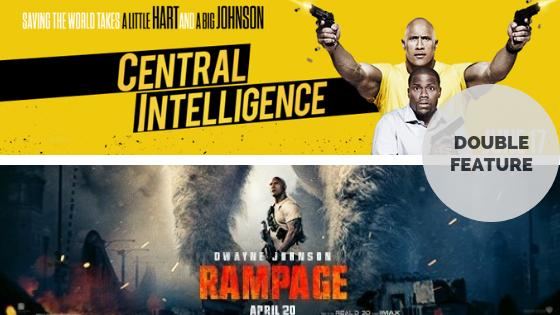 What better way to start the week than with a Dwayne The Rock Johnson double feature, right? That is really all I have to say. Today’s pairing is one that happened to work out so I deliberately delayed Central Intelligence to pair with Rampage which I rented a few weeks ago.

After he reconnects with an awkward pal from high school through Facebook, a mild-mannered accountant is lured into the world of international espionage. –IMDB

Jumping into comedies is a scary thing because you never know what type of humor is going to be on the other side. Baywatch (review) is a fine example of how humor didn’t work but the action did. Central Intelligence reminded me a little of Get Smart. There is a lot of over the top humor and somehow a part of me enjoyed it because Kevin Smith and Dwayne Johnson paired up and reminded me of the good old days in Hong Kong cinema when Stephen Chow and Andy Lau did God of Trickery (one of my fave films ever). Before long, I did buy into the humor and the random action and how great Dwayne Johnson’s character is and how scared and random reactions Kevin Smith had.

On top of all that, you get some great cameos with Jason Bateman and Aaron Paul which is pretty cool as well. Plus, there is this secondary story of how high school affects the present with a message about bullying and a positive message about standing up for who you are and all that good stuff. Its an action comedy and it remembers that all the time which makes it pretty well-paced with some exciting moments.

When three different animals become infected with a dangerous pathogen, a primatologist and a geneticist team up to stop them from destroying Chicago. – IMDB

Rampage was on my anticipated list (I think) but my cinema track record this year is not too good so its all down to rentals to catch up. While Rampage didn’t get really good ratings, this sort of film is always up my alley. Big creatures, check. Dwayne Johnson in action, check. Video game adaptation, check. I went into this with the only expectation to have fun and let me tell you, I had some really pleasant surprises. It isn’t a masterpiece but there are some key things that I found here which I liked a lot and for those points, this one was entertaining.

Lets start with the elements I like, all the things I wanted delivered worked out really well. Three big creatures were done so well with the effects and graphics especially with Joe’s facial expression. Dwayne Johnson is also so charismatic in films and this one is no exception. There are some odd forced parts however, overall he wasn’t the issue. As a video game adaptation, it has the reputation to be a guilty pleasure and this one does fit into that category but then I do argue that most of The Rock’s films fall in that mindless entertainment category and it works for that purpose especially as I love not having to think too much during a film and just have fun.

Now, some good and some bad follows that part. I loved Malin Akerman as the villain here. She was quite impressive especially since the last thing I remember her in was 27 Dresses. I’m sure I’ve seen her in other things but I don’t remember right now. She did a fine job here. Now, I’m a little lukewarm on Jake Lacy, someone I thought did a fine job in Miss Sloane albeit a fairly smaller role. Here, he bordered a little on the annoying part. Talking about short roles though, Joe Manganiello has a cameo here and it comes and ends so quickly but his presence is always appreciated. My fave part though, has to be Jeffrey Dean Morgan and his role. Same goes for Naomie Harris who is an admirable actress that I really like in a lot of the roles she’s done. The cast here gave a lot of life to Rampage along with its creatures. Everything else was something of a generic sort of set-up but it managed to keep me interested and entertained so its a fun time overall.

That’s it for this Double Feature!
Have you seen these two films? Thoughts?