I had originally wanted to do these two separately.  These both got third highest amounts of votes in the Halloween polls for psychological thrillers and everything else horror.  BUT, after trimming my movie rundown, I still have two movies that I really want to check out for this Halloween marathon so that means, mega movie night tonight. YUP!

I’m going to say right now that watching anything other than Friday the 13th sounds so refreshing.  I’ll have a huge recap on November 1st once I’ve gotten all the business taken care of. Friday the 13th made me forget what an actual horror movie felt like.  I never was genuinely scared in this marathon. Thats saying a lot because I’m so easily frightened.

Now, I needed to get myself in the right state of mind to watch these but I really wanted to, along with probably 4 other ones on the initial poll.  I’m sure I’ll fit those in eventually, just not in this marathon 🙂 Lets get the show on the road.  After all, we do have 2 movies to talk about!

Kevin’s mother struggles to love her strange child, despite the increasingly vicious things he says and does as he grows up. But Kevin is just getting started, and his final act will be beyond anything anyone imagined.- IMDB

I have no idea how to sum up the movie so I’m just going to use whats on IMDB.  However, as much as its showing the course of Kevin’s mother (Tilda Swinton) trying to love her son, its also about her trying to make sense of everything that lead to his final act.

We Need To Talk about Kevin is one of those psychological personality analysis of two people.  In this case, its Tilda Swinton’s character as Kevin’s mother flipping through the upbringing of his son’s life and figuring out why he did that final act.  What was the reasoning behind it and whether it was essentially her fault as everyone else seems to treat her like she’s the one responsible.  It a true look at the whole nature versus nuture story of what affects growth and development the most.  I get that as I’m watching it, except I feel that the material is a little too deep to be brought to the big screen.  Its the same reason I was happy to read Gone Girl or The Lovely Bones before seeing a movie.  I’m guessing the novel dives into a more balanced two sides of the story view.  In this one, Ezra Miller’s Kevin gets such a small part although the younger version of him really does bring out a little of his character already.  Being based on a source material that probably is pretty deep is hard to bring it to the big screen and now I really want to check that out and revisit this movie because I feel like I might appreciate it more.

Although, I do think the material is not shown appropriately or could possibly be more effective.  There is no doubt that the performances were all around amazing.  This is my first time watching everyone except John C. Reilly and I can’t even remember what I saw him in before. I know understand why everyone raves about the stellar performances by Tilda Swinton because she grasped her role very well.  I really understood her perspective of this and just the confusion and despair of being in her situation.  I’m in the stage of life where its almost time to decide when to have kids and this really clings on to make you wonder: who can predict how your child turns out.  Its funny because it makes me think about a Chinese saying about  how who you are at 3 determines who you will be at 80.  I guess, nature plays a role but nurture is also a big thing because the script always gets in a little bit about how there are a lot of similarities between Kevin and his mother.  On the other hand, I might have wanted to see more of Ezra Miller’s role but that ending definitely was thought provoking.

Not really a horror per se, but as a psychological thriller it does hit a few buttons with its awesome performances. 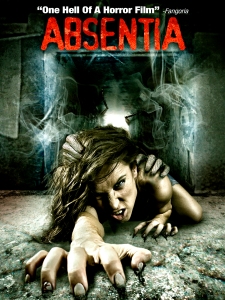 Its been seven years since Tricia’s (Courtney Bell) husband Daniel (Morgan Peter Brown) has gone missing.  Now, she’s pregnant and slowly learning to move on with her life as she prepares to file for his death certificate under the reason of absentia.  Her sister Callie (Katie Parker) drops by to help her pack up and move forward. This is when they realize that maybe  there’s something more to the disappearance of Daniel.

Goodness, thats a bad summary I wrote up there.  Its okay, I really just don’t want to say too much.  Absentia is one of the more creepy movies.  The first time a creepy scene came in I turned off the movie for a solid 5 minutes before deciding to turn it back on.  Because you know what? I need to tough it out since Halloween is literally around the corner.

Absentia can be split into two parts. The first part is creepy and builds up the story of Tricia and how she inner struggle while Callie is also finding herself and trying to be helpful to her sister.  At the same time, they both have some creepy incidents that happen.  The second half takes a abrupt turn and changes a few factors in Tricia’s life especially but pulls Callie into a more main role as she starts seeing that there might be more to the disappearance and may be linked to a bigger picture.

Absentia is very much an independent horror film and some of the shots and how they move around is obvious that fact but it has a kick ass story.  I was totally pulled in and even though the start scared me so much, I’m happy that I toughed it out because the director and writer Mike Flanagan is fantastic.  He knows how to put a story like this one into a movie and balance the right factors, giving the right scares and the perfect sound and silence and even when to reveal or not to reveal anything.

Maybe its because I’ve been sitting around watching campy movies for the last month that I’m even easier pleased and I was extremely jumpy but Absentia has an awesome story behind a good cast and the atmosphere that Mike Flanagan puts together feels so perfect. He takes you on twists and turns and times them really well.  I don’t usually rate horror harshly (unless its for Shitfest) but I do know when I have a great one and this one is a must-watch horror experience on so many levels.

Have you seen We Need to Talk about Kevin? What did you think of the performances? Which aspect was the best in this movie? Did you feel that there should’ve been a stronger emphasis on the grown up Kevin (although this movie was already pretty long)?

How about Absentia? Have you seen it? Did you like how it ended (because I did!)? Was it on some level creepy for you?