I’ve been a Jim Carrey fan since the days of Ace Ventura or is it Mask? Whichever came first.  Not really good at the whole timeline with movies.  I picked this one up at during Boxing Day in the (extra) bargain bin for super cheap, and I had only watched  a little portion a few years ago at a party.  It looked entertaining enough.  Since then this is the second time, I’ve seen it.

When a huge unknown fire tears the Baudelaire mansion down and perishing the lives of Mr. and Mrs. Baudelaire, their three children are suddenly turned to orphans.  The eldest is Violet (Emily Browning) who is an impeccable 14 year old inventor. Second is Klaus (Liam Aiken) who has read more books (and remembers every single one) than any adult would read in a lifetime and youngest is Sunny (Kara/Shelby Hoffman) who is merely an infant but has razor sharp teeth and loves to bite absolutely anything. When this unfortunate event happens, their fortune caretaker, Mr. Poe (Timothy Spall) has the responsibility of sending them to their closest relative listed and that person is Count Olaf (Jim Carrey).  Count Olaf is an actor who has his own troupe and misleads Mr. Poe in believing that he is out for the children’s good when all he wants is to get their huge fortune.  For him, the law gets in the way with its rules and formalities.  While the children try to escape his evil plans, he tries everything possible to get the fortune back.

Jim Carrey has changed from when I first saw him in The Mask or Ace Ventura.  However, the one thing he hasn’t changes is his ability to freely change his voice around and assume someone else’s identity.  That proves to be the highlight of this adventure flick.  As I watched the special features on how they designed his Count Olaf character, there is so much to his abilities that change this flick to add a bit of dark humor to it.  I say dark because this is A Series of Unfortunate Events and being the cause of the situation, he becomes the Baudelaire orphans’ darkness as they try to seek some light. Or as Violet Baudelaire says, “There is always something”. 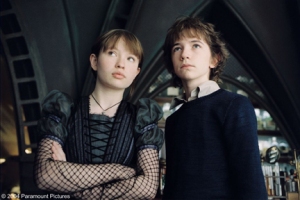 On the topic, the kids are played the Baudelaire orphans are pretty decent.  The little baby who played Sunny was just pure cuteness.  They used the cute way of giving her little baby shrieks into dialogues on screen.  That was a lot of time adding a lot of the fun element in.  Emily Browning played Violet Baudelaire and she is quite pretty and quick witted.  Last time I saw her was in Sucker Punch (which was made after this) but I hated that movie…not her maybe but just the movie itself.  Both Emily Browning and Liam Aiken fit their roles really well.  I found it rather enjoyable as the focus was on them, their characters had wit and knowledge (and cuteness).

On top of that, there were lots of popular actors and actresses added to the movie to make it even better. For one, we have the elegant Meryl Streep who plays Aunt Josephine, a woman who is scared of everything and is obsessed with perfecting grammar. Billy Connolly is rather new to me but he played a great role as Uncle Monty, a connoisseur of snakes.  On top of that, there was one of my favorite actors, Jude Law playing the role of Lemony Snicket and he narrates the movie with a little appearance. Catherine O’Hara makes an appearance as Count Olaf’s neighbor Justice Strauss as well and she’s a decent actress.  There was even a cameo for Dustin Hoffman. 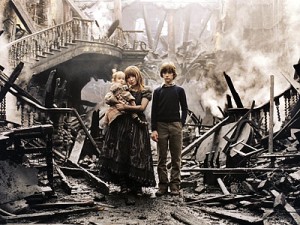 This movie is based on a series of books for children of 9-12 (according to Indigo Books).  I’ve never read them but every time I finish this movie, I always want to check it out but have never had the chance to.  Its an attractive movie with beautiful backdrops and intriguing adventures adding in a lot of very good acting from a lot of the supporting cast and Jim Carrey in one of the lead roles.  Its a fun family adventure. I would recommend it for sure! Its enjoyable and entertaining 🙂

Let’s end on sharing one of my favorite quotes in the movie is this and also shows that between all the negative unfortunate events, there is always something positive that comes out of it:

One day, when you’re older, you will learn all about the people we have befriended and the dangers we have faced. At times the world can seem an unfriendly and sinister place, but believe us when we say that there is much more good in it than bad. All you have to do is look hard enough. And what might seem to be a series of unfortunate events may, in fact, be the first steps of a journey.