Where have all the children gone? At rustic summer camp Mendocino Pines, that’s the question on everyone’s mind. First one, then two, then three campers vanish—only to reappear a short while later with no recollection of the missing time. The disappearances raise questions about the children’s safety, not to mention the camp’s time-honored reputation.

When Abe, a freshman camp counselor from UCLA film school, stumbles upon a ghoulish-looking humanoid roaming the coast, he suspects this creature might be responsible for the children’s unsettling disappearances. Armed with a camera, a journal, and a thirst for the truth, Abe sets out to pry the lid off the uncanny mystery hidden among Mendocino’s Twisted Pines. – Goodreads

*Received in exchange for an honest review*

There is an obvious fascination of Lane Baker with science fiction and aliens in particular. Following the previous story Slippery Things (review), this new story is also along the same lines. This time around, the main character is a young adult Abe who takes up a summer job as camp counselor when weird things happen and he discovers what is the cause. As the story unravels about this mysterious lurker, the motives come together.

There are few things done well here. The first is execution. It has something of a novella length which gives it space to develop a story but also a quick pace for events to happen without things lingering and dragging therefore making it a nice little page turner, more and more so as the story pulls together and the heart of the situation and the two central characters start interacting.

Another element done really well here is characters. There are quite a few because of the setting in the summer camp with counselor names bouncing around the pages and young campers being caught up in the mystery. However, there is a definite focus on Abe as the main character and a lot of this going from his perspective. Telling a story from a perspective always works well to still create mystery out of what is unknown to the character. The two sided (both good and bad depending on the part of the story) is that while the humanoid does have some character development and as gaps of mystery behind him because of taking Abe’s perspective, it also has the issue that the character doesn’t have quite the depth and is more of a supporting sort of deal. At times, it works and at times, it doesn’t.

Overall, Twisted Pines is a well-paced YA sci-fi novel. There’s an obvious improvement in dialogue here (in comparison to the previous story).  A lot of Twisted Pines is well-written, whether its building up the suspense or how the chapters are structured and the progression of the Abe’s character and his discoveries, especially on how it starts and ends. I can’t say that Abe, as well done of the character as it is, is too memorable but feels suitable in this story. There’s a lot more that can be explored with this story especially in terms of the humanoid however, its a simple page-turner story that keeps things straight forward and because of that, it also manages to keep it intriguing enough to keep want to know more about what happens next. This one is well worth the read.

I have a whole lot of catching up with the reading bit so expect to see a few reviews go up during December as I rush to finish the Goodreads Reading Challenge.

Next up for reading is an independent young adult sci-fi novel by Lane Baker.

*A huge thanks to Lane for reaching out to me and sending me a copy to review.* 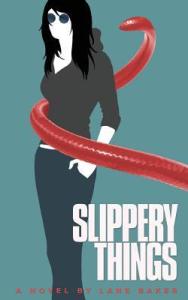 Jaded high school Junior and detention hall regular Larissa Locke has a recurring dream in which creatures sneak into her bedroom at night to perform experiments and extract her blood. Tiny scars on her arm suggest that perhaps she isn’t just dreaming. But wait! If she’s really the victim of blood-sucking alien intruders, then why is her bedroom window still locked each morning? –Goodreads

The best part about reading is discovering all these creative and unique worlds and creatures that authors have built just with their imagination.  Some of the best books I’ve read this year have been from independent authors. Slippery Things is about aliens.  Its also one of the categories that I read very little of.  I actually can’t remember the last time I’ve read one about aliens and invasion and the likes.  Maybe Ender’s Game? That doesn’t really count.  Regardless, Slippery Things is a very fun read and an absolute page-turner.  Its not a long novel but it successfully builds up its main character, Larissa Locke and also manages to decently determine the motive behind the aliens in a good pace.

Sometimes, its okay for a novel to be short and concise.  Slippery Things grasp that point very well.  It knows how to not drag out scenes unnecessarily.  At the same time, it works hard describe vividly the creatures and the situation that Larissa is in from how she feels to her reactions.  On that point, Larissa Locke is a good character. Sometimes the dialogue was a little clunky here and there in a few small spots but overall, her character was rather realistic.  It does focus around a teenage girl and has some high school drama that goes on in the background which is completely understandable.  What is good is that its controlled well enough to not let it affect the main story that is coming to light. Actually, the story builds Larissa into a very potential bad ass character in the last few scenes.

I’m falling into spoiler territory if I keep going.  I liked Slippery Things quite a bit.  If I had to criticize Slippery Things, its that sometimes there are some clunky dialogue (that I mentioned before) and the ending sequence has one little part that I felt was a little awkward.  It summarizes an overview of the outcomes of our characters. I’m always a little not sure about how to react to those.  That is only one or two paragraphs so its not exactly a huge impact.  I guess it is because the character development went mostly to Larissa and perhaps her family.  When it came to her high school friends, I didn’t really care too much about because their parts were not as significant.  However, I find it is forgiveable because of the short length of the novel.

Overall, Slippery Things is a quick page turner about aliens. Larissa Locke is a realistic teenage girl lead who I can picture making the same decisions in her shoes.  Despite its length and some awkward dialogue, it works very well in pacing the story and creating vivid description of the character and their setting. Plus, it also does a good job at revealing the aliens and their motives. Its definitely worth a read.