The first double review of a movie is happening for this Halloween marathon.  My initial idea for this next installment of Nightmare on Elm Street with its crossover with the Friday the 13th series was to do a reblog but you know what, I can’t.  For one simple reason, when I watched it the first time, I knew the Friday the 13th series and Jason Voorhees was the point of reference while I was completely in the dark with Freddy and the Nightmare series. Now, watching this again, I’m looking at it from the Nightmare on Elm Street point of view and its incredibly different.

Freddy Krueger and Jason Voorhees return to terrorize the teenage population. Except this time, they’re out to get each other, too.-IMDB

The second viewing of Freddy vs. Jason turned out to be a super hard one to complete.  We took about 3 viewings before we managed to get through the whole thing. Does that mean that its a bad one? I think it might. Last year, when I saw it, it didn’t have such a huge thing, mostly because I watched it for the fact of its addition to the Jason/Friday the 13th franchise.  Jason Voorhees in Freddy vs Jason was kind of an accessory to murder.  He was the puppet to kickstart Freddy’s plan that just went off course because we all know, Jason really doesn’t have much on his mind but the blind desire to kill. With that said, his role was taken on very well.  He even played a key role in blocking off Freddy and causing Freddy’s initial plan to not work out and initiating their versus battles. 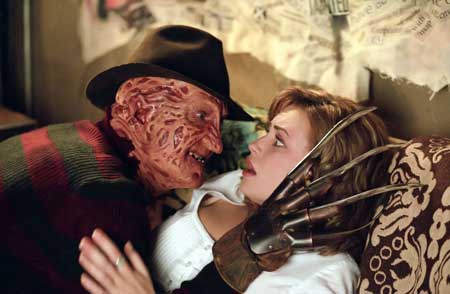 With that said, Freddy in this one is an absolute goofy character. In a way, I started getting rather angry with this one after understanding Freddy’s character. Freddy wasn’t enjoyable to watch.  If you enjoy the fact that Freddy has gone down the goofy slasher road, then I’m sure you might enjoy this one rather a lot.  But for me, I didn’t and it actually angered me quite a bit.  It felt like they were mocking these two characters to no end.  I’m a fan of Jason Voorhees and I truly believe the Fred Krueger has the essence in his character to be absolutely bone-chilling scary, you know, the things that haunt us in our nightmares literally. But somehow, except for the first one and New Nightmare, we haven’t hit that territory.  I like the Nightmare series because of how it does try to keep a good storyline and Freddy has the reason to be angry and revenge and yet, Freddy vs. Jason was pointless.  I couldn’t place where it was supposed to be in the franchise timeline.  All these things frustrated me. 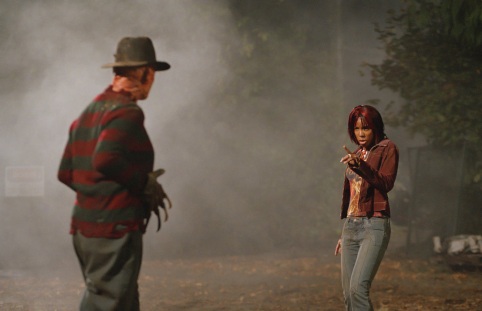 I guess in the end, Freddy vs. Jason was a disappointment.  It seems whenever you clash two franchises, nothing really good comes out of it except the looks of wanting to grab some quick box office dollars off of the fans of both or either franchises. But, I never do reviews without having a positive. If you do want to enjoy this, the battles between Freddy and Jason are a total joy to watch.  Compared to the script and the dialogue and the portrayal of the characters, put aside the goof, they kind of hit a kind of fun and smart territory.  One of those rare moments when they unite that kind of works.

Overall, Freddy vs Jason is a nonsensical addition to the series. Freddy is the most campy and goofy he has ever been.  He’s doesn’t instill fear at all.  After knowing both Jason Voorhees and Freddy, while this is more of a Freddy series addition, Jason has a better role here mostly because he matches the “throwing everything together and see if it works out” sort of strategy. We get a bit of Elm Street and we get a bit of Crystal Lake.  We have some stupid teens that do things that make no sense and we have some stupid kills and some pretty decent ones, but what stands out is the battles between Jason and Freddy.

You can see my review of it last year HERE!

Have you seen Freddy vs. Jason? What do you think? What did you like/dislike?

Suffice to say that I’m pretty happy that this is nearing the end of the franchise for me.  Jason X gave me glimmers of hope that this franchise can still go in the campy fun area and really roll with it.  Next up is the 11th in the Friday the 13th franchise and something like the 8th in the Nightmare on Elm Street one.  I haven’t seen any Nightmare on Elm Street and till 2 years ago I didn’t even know how to differentiate between Jason Voorhees, Michael Myers and Freddy Kreuger and which franchise they went with, nor did I know what it was about.  I’m a bit more knowledgable now especially after this one because I will be experiencing the first time who Freddy Kreuger is while continuing this crazy Friday the 13th journey 🙂

Lets hope its a good one, right? Especially since next year, I’m betting that I’ll be doing the Nightmare on Elm Street franchise provided I find all the movies.

Freddy Kreuger (Robert Englund) has been stuck in hell for a long time.  He’s decided to hatch a plan using Jason Voorhees (Ken Kirzinger) to bring back the terror into the kids and teens of Elm Street. Their fear and remembering him will strengthen him.  Except Freddy never imagined Jason to go on an uncontrollable killing spree which leads them to not only leave a blood trail separately but eventually they have to fight each other because either won’t step aside easily. 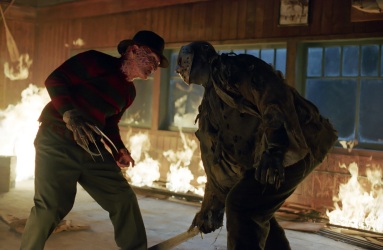 I’m a bit stuck on how to review this one.  For one, how can I evaluate Freddy when this is one of the later movies (need to check that).  However, as a movie which is supposed to follow that horrific 9th movie where Freddy’s arm shows up to pull Jason to hell, this does tons better.  I think it has to do with the whole being a more recent movie.  Freddy Kreuger is an interesting character and I’m definitely down to watch the Nightmare on Elm Street franchise.  If anything, his burnt distorted face and the premise of entering dreams and killing is an effective one.

Freddy vs Jason is one of the better ones out of the last few I’ve seen.  I had a really good time with it.  Its way excessively bloodier than the others.  Jason goes on killing spree but we get to see how he does it brutally.  There’s never a lot of blood.  If there is blood, its shielded by the rainy weather or the dark surroundings.  This one is different.  I put an example below. 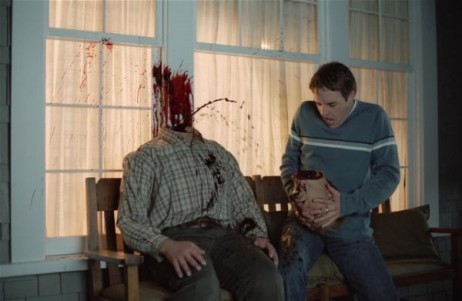 Two crazy men in their ways lusting over killing and both unkillable in their own senses makes this a pretty good flick to watch.  Plus, the idea of tying a new scenario like Elm Street and then going back to the roots in Camp Crystal Lake gives familiarity to both sides of the fans and a refreshing moment for Friday the 13th.  In the 11th film, after travelling to space and all, its a refreshing moment.

For me, the highlight and familiarity came in the director Ronny Yu.  While most of you on the blogasphere is familiar with these iconic horror figures in your youth, I was a child surrounded with Hong Kong films.  Ronny Yu has contributed some good and memorable 90s movies.  I’ve never seen him do something in the horror but I think he brings a nice style to it 🙂 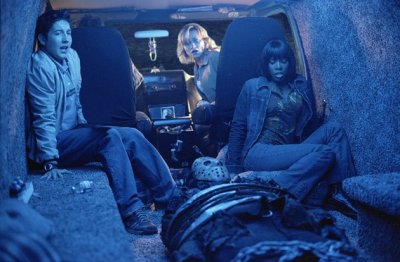 The rest of the cast being teens from Elm Street were all pretty good.  The story is solid.  At least I believed it because I haven’t seen any other stuff from Elm Street.  As usual, there is campy dialogue and teens are teens where some get drunk and others get high and Freddy does the whole getting into their heads and controlling them or something at one point, but thats ok. I can accept it because its a fun movie to watch.  I don’t think I’ve felt this entertained in the Friday the 13th movies in a while. I liked Jason X but there was still something bordering the “so bad its good”.  Something about Freddy and Jason makes this better than that.  Its actually a decent flick and  an unexpectedly good addition to the series.  Maybe its just having two bad-ass killers facing off that makes it all the better.

Have you seen Freddy vs. Jason? What are your thoughts on it? Is it a worthy addition?

One more to go and its the remake in 2009!  Halloween is right around the corner, so is my work deadline.  Excuse me for the sporadic timing of the final reviews.  I promise you that I have a few reviews to go up by October 31st but it’ll be published at all sorts of times.