Its really early in the Fantasia Festival to be feeling a little overwhelmed but after the showing of Cooties on Friday, I needed one because the late showing turned my schedule around and then the weekend was slightly crazy. Weekly Adventures coming up to explain that bit in more detail.  After a weekend of crazy, other than this one, I have two more Fantasia reviews to go up this week.  Thank goodness, the second week of Fantasia is a lot less hectic so I can catch my breath and get these reviews up.

Before Cooties started, we had a short film called Point of View open.

Its directed by Justin Harding who was present to introduce it a little. Running at 8 minutes long, its about “A tired coroner is stalked by the living dead — but only when she isn’t looking!” (Fantasia site).  Let me tell you: this short is awesome! The best way to start a movie like Cooties.  With an equally funny movie that had some little nerve-wrecking moments but all in 8 minutes that passed by faster than I ever imagined. 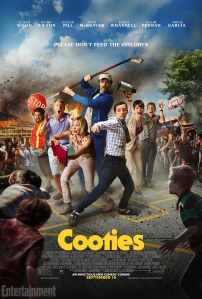 Clint (Elijah Wood) heads back home to Fort Chicken to hopefully work on his novel and gets employed as a substitute at the high school he used to go to when he was younger. There he meets a girl, Lucy (Alison Pill) that he used to go to high school with.  Lucy is dating the angry and awkward gym teacher, Wade (Rainn Wilson).  When contaminated chicken nuggets are sent to the school and a little girl called Shelly eats it, the virus spreads among the young kids and turns them into raging, flesh eating living dead.  As the school day progresses, the group of teachers and faculty that are struggling to survive try to find a way to escape the school.

You know how Shaun of the Dead was this really great horror comedy? Cooties is very much along the same lines except with a sillier sort of humor because its more Americanized? Its not meant to be offensive (in case you feel that way). Its just that British humor is in a league of its own. I always say this when I look at comedies: its totally subjective. While I’m not a huge fan of American stupid humor and there was a bit of it here, for the most part Cooties had a lot of effective laughs while being completely and equally effective at creating gory and tense situations. Even in horror comedies, kids being the ones infected or just in the scary side is incredibly creepy. There were really intense parts in Cooties, especially one of the kids who was just raging maniatic. The premise here and even the logic behind it is pretty great. Cooties essentially means that its a virus only in kids.  Plus, it even has some hidden messages about the education system…maybe I’m overthinking this but there’s one bit that made me feel like it was really poking fun at this new thing in school.  I don’t want to spoil it so I’m going to keep it vague. Point being, it works and does it in a really smart way.

The next aspect I would like to talk about is the characters. We have a mixed bag with the teachers.  Our main character is Clint who is really the not so confident and not really a leader who kind of gets forced into the situation.  Wade is the weirdo angry gym teacher who has all the dumb lines but who actually is hilarious especially when they start running the movie references and all that stuff.  Alison Pill is the preppy teacher who isn’t really all that positive so we get a first taste of her layered characters.  Actually, all these characters have that.  In the more secondary role (and my favorite character) was the science teacher, Doug played by Leigh Whannell (also co-writer of the movie) who pulls the best hilarious lines.  I think almost everyone laughed whenever he said any of his lines because they were absurd and just so inappropriate most of the time, especially since he played the socially awkward dude and Leigh Whannell does it so well! As the movie progresses, even the secondary characters all collectively add to the awesome fun comedy that adds in a good level of tension.

Overall, Cooties is a downright awesome horror comedy with just the right amount of comedy to satisfy your taste and very well balanced in the tense horror zombie movie its supposed to be.  With a fantastic cast that has script which gives us a variety of different characters that help create a balance that works effectively, it keeps the movie constantly entertaining. The premise of using kids (and having cooties) to be an actual virus that turns them into zombies is absolutely great.  The whole idea of it was simple but well illustrated during the movie as we learned more about this virus and just how it had spread.  Cooties ends with a bang and leaves it wide open for a sequel and you know what, if the same crew sat down to write the sequel, count me excited! You can bet that this one is going right into my movie collection when it comes out 🙂 Its really good and I totally think you should give it a shot!

Seeing as this is a Canadian premiere, I’m thinking its opened elsewhere.  Have you seen Cooties? What do you think of it? Are you a fan of horror comedies?