Its been a while I haven’t done a double feature and these two movies probably deserve their own post but movie review backlog has kind of grown and there’s a ton that I wanted to do a write-up on and I haven’t.  Plus, Fantasia is only a few weeks away (really right around the corner) and I’m trying to not review too much because I just get tired and not want to do it.  Consider this a little break but also a little exercise on reviewing horror since I haven’t done it in a little while.

Let’s check out these two: Antisocial and You’re Next! 🙂 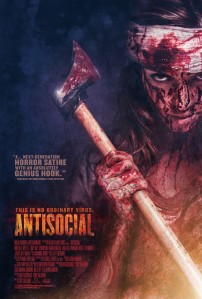 On New Year’s Eve, a mysterious epidemic sweeps the world.  Five friends who get together for a house party end up caught in the mess and locked inside. As they research the virus on their phones and laptops, they slowly turn from being paranoid to downright scared.  At the same time, the questions loom as they wonder who is hiding something, who is sick and what do they do next? Will they survive?

Ever since Fantasia Film Fest 2013, Antisocial has been on my radar.  I missed it because it had a 4pm showing on a weekday (if I remember correctly) so work took priority as it also overlaps one of the busiest times of the year for work.  Regardless, I grabbed a copy of it some time last year and have been meaning to watch it.  Finally, with my fiance on vacation, I got him to sit down and watch some horror with me (well, these two I’m reviewing). 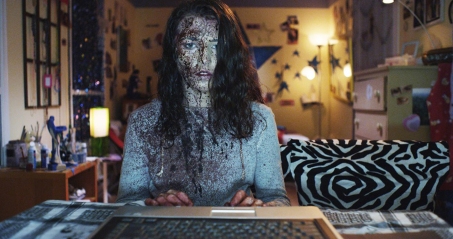 This is how it starts…

For the most part, I enjoyed Antisocial.  The acting and dialogue isn’t exactly great but then a lot of low budget movies usually aren’t.  Some ideas, especially the ending is kind of Resident Evil-esque where as the whole set up has that eerie Pulse sort of feeling to it.  I think until the whole idea of where the virus came from, it was pretty good.  It makes a statement about social media and the control it has on our lives while mixing in the “zombie/apocalpyse” genre and for the most part, it works. 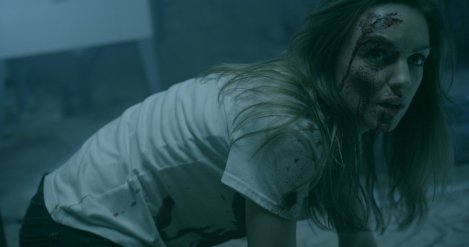 Sure, this is still focused on college students so there’s a ton of things you’d expect from some silly dialogue to inappropriate reactions but in general, I really enjoyed it quite a bit.  The lead, Michelle Mylett played her role really well.  And what I appreciated more than that was the whole build-up and especially how the shots were framed.  I never ever talk about this but I liked the whole atmosphere of it and what they were trying to do here.

My only issue was that I didn’t quite buy the explanation of how the virus works but then that ending (even if it felt a little overused) was a great set-up for a potentially better sequel and we’re getting one that will be released for Fantasia Festival (which I’m going to see) this year. There’s a lot of pretty negative reviews but I don’t agree with the majority of it.  Maybe I’m weird… Its not a masterpiece. Hell no, so don’t start biting my head off if you hated this but I enjoyed it.

Have you seen Antisocial? What did you think of it? 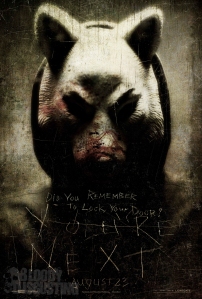 When the Davison family comes under attack during their wedding anniversary getaway, the gang of mysterious killers soon learns that one of the victims harbors a secret talent for fighting back. – IMDB

Before we start this review, to justify myself a little, I have seen The Guest.  I just never got around to reviewing it.  But then, why would you need it, right? All of you lovely reviewers have already done a fabulous job of it.  I liked it a lot.  The style, the music and Dan Stevens and Maika Monroe and the atmosphere, everything was done really well.  So, when it came time that I saw You’re Next on sale shortly after I saw The Guest, I picked it up.  My only issue: as much as a lot of you think The Strangers was a great movie.  That movie ruined home invasion movies for me.  What works for the first half doesn’t when it starts feeling repetitive and that ending was horrible.  BUT, we’re not here for The Strangers and that is the closest I will come to watching/reviewing that one again.  Point is, I get a little nervous when it comes to home invasion movies because they can be boring and dragged out.  So here I am, hoping that You’re Next lives up to the hype that its got. If it has a fraction of The Guest’s style and atmosphere, we’re in for an awesome ride already 😉

Man, I ramble a lot. You’re Next is a neat little film.  I’m still not so sure whether the masks creeped me out, because I don’t think it did but the first half of the story building for that plot twist was really good.  It was predictable but I took the bait and still got all tensed up in a few scenes.  What makes home invasions effective (for me) are the unknown and unpredictability and here, you don’t know much about these animal masked invaders.  Not that this house had any peace as is since the family had obvious problems already.  Whats nice about You’re Next is the story.  This family has layers and layers.  They each have their issues and their personalities all make up for the choices they make as they approach this group of invaders who have an intricate plan.

I always wonder why invasions usually have 3 person team.  I just wonder if that structure works the best.  Or did this one have four? Man, I’m getting confused but You’re Next is pretty good and the plot itself is quite creative.  The best part is that our main character here, Erin, played by Sharni Vinson is super badass.  I mean, it really came out of nowhere.  It mixed a good bit of blood and gore with some creepy atmospheric moments that just sent a few chills down my spine.  Plus, there’s always something going on and it keeps the whole tense movie experience going and that worked effectively for this one.

Have you seen You’re Next? Likes/dislikes?

Christmas is here in only a few days and I have a TON of stuff (tentative) that I want to put on, so I’m going to do a double feature.  Now, Arthur Christmas really deserves its own post BUT I’ve already reviewed it once HERE when I saw it on a flight back in 2012.  Except, I felt that it deserved a rewatch because when I’m on the flight, at a certain point things just feel really blah because I feel really blah and I think that affected my view of the movie. And then, there’s the issue of the second movie Happy Christmas but I’ll go more in detail below.

Lets get this started! 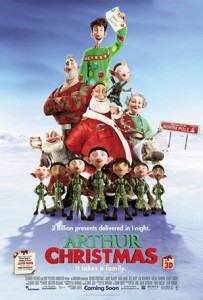 December 24th is a busy day for Santa and aside from popular belief, its not a one man show.  Santa (Jim Broadbent) has a whole group of support helping him be the most efficient possible to make sure every child isn’t missed. The biggest help comes from his older son Steve (Hugh Laurie) who is hopeful in being the next Santa.  Santa’s younger and much more clumsier son, Arthur (James McAvoy) is a full believer of Christmas and admires his father but is sent to take care of Letters.  When he realizes that a child was missed, he is determined, even though his father and brother believe it is impossible to deliver it on time to the child, to get the gift to there with the help of GrandSanta (Bill  Nighy).

Arthur Christmas is a brilliant animation and believe me, its a lot more engaging and entertaining to watch it on a bigger screen than the plane screen (obviously). The dynamic characters and the fun approach of a modernized Santa versus the traditional Santa works out to be a lot of fun.  Its full of hilarious moments intertwined in some awkward but still funny ones. It takes what we believe and adds a new little twist and its completely believable.

The voices are done so well. Arthur Christmas makes Arthur out to be so different, scared and abnormal in his family but also its him that makes this so heart-warming, fun and contributing to what makes this absolutely funny.  Arthur is a lovable character because he is unique as the clumsy worry wart who doesn’t believe that he can do anything other than worry and be scared. But he has the purest of hearts and that makes him awesome 🙂

I’ve already reviewed this once before but second viewing in a normal setting definitely accentuated the awesomeness in Arthur Christmas and in my last review, I said its not one I’d go to for Christmas every year, well, I take that back.  This one is definitely worthy for annual viewing 🙂

Have you seen Arthur Christmas? What did you think about it? 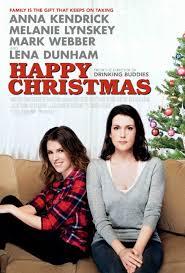 After a breakup, Jenny (Anna Kendrick) moves in with his older brother (Joe Swanberg), his wife Kelly (Melanie Lynskey) and child.  Jenny is irresponsible and not very trustworthy as they learn about it quickly but while she is getting over her breakup and moving forward, Kelly is also dealing with having a hard time finding the inspiration for her next novel.  With the help of Jenny and her friend, Carson (Lena Dunham), she starts finding that she needs to create a balance between her career, her family and her husband in order to feel more motivated and happy with her own life. 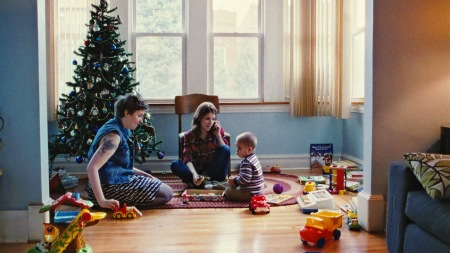 First things first, other than being set during Christmas, do not let Happy Christmas fool you with its title.  It has nothing to do with Christmas.  In fact, its pretty much an indie drama to the core.  Its a lot of low-key issues piling up together and moving in a realistic way of just watching a family interact with each other.  I’m not particularly a fan of movies like this especially since they always end in this somewhat weird abrupt fashion. 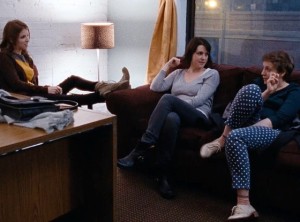 The cast did well with what they had and I could get on board with what the story was trying to say but in the end, it felt like I watched 82 minutes of really not much going on.  Maybe I’m too emotionally stunted to watch these things. Or maybe, I just don’t like to watch such profound movies with some deeper meaning to it, which kind of makes me feel really bad (like I have no depth) when I say that.  Except its the truth.  It just feels so meh.  The only thing I liked was the characters but the story itself didn’t have much going on.

I don’t know how to review something like this.  Reason for the double feature. I wasn’t exactly impressed with the movie but Anna Kendrick is fantastic in this so that kind of works out 🙂

(I’m kind of cheating to put this in Christmas marathon but it was part of my rundown and the title has Christmas in it, so it kind of works, right?)

Have you seen Happy Christmas? What did you think about it?