Originally, I wasn’t going to watch The Grey just yet.  Yesterday, Fogs over at Fog’s Movie Reviews gave his FMR Awards for the Most Surprising Movie of 2012 Award to this movie, I knew that I had to watch it soon.  If you haven’t been over at his blog, you should check it out HERE! He’s giving out his FMR Awards for the rest of the week for other categories. 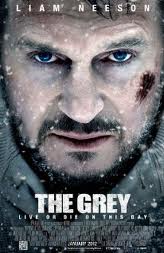 This is a survival story above everything.  We start off up north in Alaska.  Up north at an oil company where there’s a lot of oil workers, we see Ottway (Liam Neeson) who is the man responsible to hunt down the wolves and animals that could attack the workers there that approach the company perimeters.  As they prepare to leave by plane before a storm hits to head home, they all wake up in the midst of a plane crash.  Ottway looks around and finds six men that have survived.  In the middle of an snowy and frozen land, they also get approached by big wolves.  These six men and Ottway decide to leave and keep walking in hopes of finding help and a way to get home or simply to avoid freezing to death or being attacked by wolves.

I had no expectations for this movie when I started.  All I knew was that it had Liam Neeson, bunch of stranded men attacked by wolves and survival movie.  Of course, that was the general idea of the movie and for some, it would sound crazy to just go see a movie for that, but I really did love every moment of it.  IMDB calls it a Action/Adventure/Drama and its exactly that.  Every moment is extremely gripping and intense. Maybe its the fact that we don’t know what could happen next: when a wolf will rush out to attack or when an accident could happen or just when a bad decision could be made or just the weather could rage.  They are in the middle of nowhere and everything is unpredictable.  This aspect really took me into this movie.  On the other side, we have drama and in circumstances that they are in, they made me believe their stories.  It managed to hold a really good balance between being dramatic and intense.

The only actor I knew in this was Liam Neeson and the past movies I’ve seen of his, excluding Batman trilogy and Love Actually, I disliked the movies.  However, I do like him as an actor most of the time.  The other surprising factor in this movie is that the other 6 men are not familiar to me.  I did a bit of research and found that some of them were in flicks I had seen before however, the role they took here is completely different.  Everyone did a pretty fantastic job and portraying different types of personalities and how they reacted to fear.

There isn’t much to say about this movie without it going too into the spoiler zone.  If you like intense, gripping survival stories, this one offers a great take.  I definitely recommend this!