This week’s Netflix A-Z is for J! I ended up choosing Jenny’s Wedding!

Before my blogging days (or maybe I was but before TV Binge days), I used to watch Grey’s Anatomy and loved Katherine Heigl, even if her character didn’t really work that well and eventually just left the show. Then she did a really fun 27 Dresses. You can disagree all you want but I liked it a lot plus there’s James Marsden. I don’t have reason why I like rom-coms anymore. Jenny’s Wedding’s cover looks a lot like Bride Wars but this one is not about the same thing. Oh, and I like Alexis Bledel because of Sisterhood of Travelling Pants. I didn’t see any Gilmore Girls yet (which I probably should eventually.) Reasons for why Jenny’s Wedding is on my Netflix list. 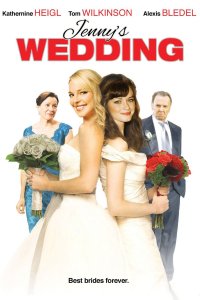 Jenny Farrell has led an openly gay life – except with her conventional family. When she finally decides to start a family and marry the woman they thought was just her roommate, the small, safe world the Farrell’s inhabited changes forever. They are left with a simple and difficult choice – either change with it or drown.-IMDB

When you look at Jenny’s Wedding’s ratings online, its really not good. You might even turn away from it. However, Jenny’s Wedding is worth something, even if its a courageous coming out story.  Jenny’s Wedding does do a good job at showing the potential hurdles of coming out. Its never easy to live in a lie especially to family who are the people someone loves the most. Jenny’s Wedding does a good job at showing the journey of not only Katherine Heigl’s character Jenny breaking free from those lies and confronting her family and showing the opposite side of her parents and siblings trying to decide if they can accept it and still see her for the person she had always been. While that is the dominant story, Jenny’s Wedding has a little more simply about honesty, family and being true to yourself but also realizing that what you assume of others may not be true just like when others assume something of you.

The intentions of Jenny’s Wedding is commendable. However, the one downfall that made me resist liking it more was that Jenny is courageous but at a certain point, in a very frustrating way. She’s a grown-up woman who decides to take this huge step to marry the woman she loves impulsively after being inspired by her father’s words but she never takes into consideration of how this sudden news that doesn’t even give them time to warm up to is thrown at them with somewhat of an ultimatum. The frenzy that is causes between each member of her family brings out something different. One of the scenes with the most impact scenes is when she gives her dad (played by Tom Wilkinson) a huge lecture about taking her for who she is or leaving it.  It shows how great of an actor Tom Wilkinson is because you can see the devastation and shock on his face even though he doesn’t say much. In the end, you realize that she midjudged him all along. It is moments like these that make us feel frustrated about Jenny’s character but it feels deliberate to allow to see that no one here is perfect and this is a difficult and conflicting situation for both sides. 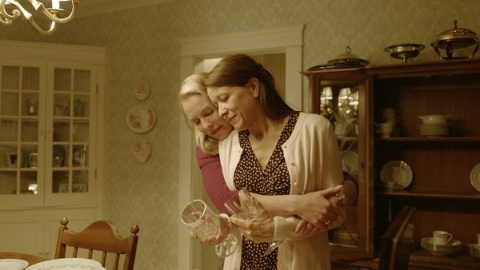 On the other hand, Jenny’s Wedding is an independent drama. One of the enjoyable choices are the cast and the personalities they have. Some of the best parts here portray their confusion of not being able to grasp what just happened and in that process, everyone shows a quirky silly side as they struggle. For example, the mom played by Linda Emond is quite adorable when she cares but doesn’t know how to but at the same time, while she doesn’t know what she is doing, people have already assumed her actions and she will ask them back what she is doing. And then there’s Grace Gummer who plays Jenny’s sister who looks at her marriage, Jenny’s happiness and relates it to the grass in her yard and obsesses over it. These are at times silly moments and to some, it may even.be unnecessary but it also made it feel more objective to see that everyone takes a little something different away from the same scenario, just like real life.

Jenny’s Wedding isn’t long but it still won’t  be for everyone. It might sit in the convoluted territory at times or it might feel like not a lot is going on. It might even watch our characters in silence or talk in other parts. While it is an indie drama about coming out, there is still much to learn from it. The overall movie is average: harmless and has good intentions. If this is your type of movie, check it out.

Next up is K! That might be after October. I’m still deciding 😉