The first in a bunch of 2015 movies is going to be a disaster film.  If you missed the weekly adventures and updates, I got a good few 2015 movies for Boxing Day at some sweet deals. Instead of leaving them to sit on my shelf and forget about them until a few months later, I decided that I’m going to try and watch a few more 2015 a little earlier than a week before the Academy Awards.  As you can see, I chose to start with San Andreas so that is definitely not an Oscar choice, not by a long shot.  However, point is that I’m going to aim to get some 2015 titles watched, more than my little 25 movies or so that I’ve seen so far.

Enough of the rambling, let’s check out San Andreas! 🙂 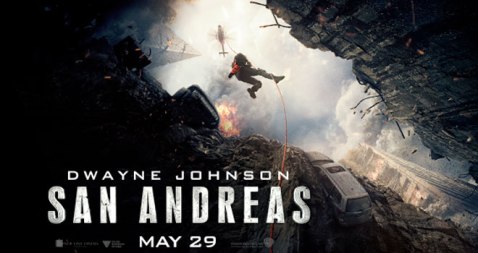 In the aftermath of a massive earthquake in California, a rescue-chopper pilot makes a dangerous journey with his ex-wife across the state in order to rescue his daughter.-IMDB

Disaster films (based on natural disasters) always work their hardest to make sure their audience needs to suspend their belief as much as possible.  Thing is, its got itself stuck in a category that almost guarantees to be bad movie-making with just a lot of crumbling buildings, floods, and other natural disasters when Mother Nature decides to tell the world (or the city) to go to hell. We’ve seen it in 2012 and The Day After Tomorrow for somewhat more popular choices. Despite saying that, you all know that I’m one to be able to suspend my belief quite a bit and plus, I change how I talk about a movie based on my expectations of it. San Andreas is a fun film.  Its predictable and has those normal natural disaster film tropes but you know what those other movies don’t have? Dwayne “The Rock” Johnson. This man can make (almost) any film work with his expressions, one-liners and just his towering build.  There are a thousand things that don’t make sense in San Andreas, like him leaving his post to save his almost ex-wife and daughter but for all those things, there’s also a decent cast and story that kind of works. My best comparison would be like watching Uncharted as a movie because the moment you feel safe, impending danger happens almost immediately after. That is what disaster films need to be.

A huge pro in San Andreas was that the cast we have here and the decisions they make, not just our main hero, Ray (played by Dwayne Johnson) made good decisions.  We had little heroes in the younger cast who saves each other and really toughs it out.  The youngest kid, Ollie makes some good calls.  Sure, romances and family drama shouldn’t be in the forefront of disaster movies but sometimes, in moderation, I can accept its existence.  Some of those moments were to let us understand Ray a little better so that we’d connect with his character also and his relationship with his ex-wife, who had just gotten engaged to this rich real estate guy responsible for the sturdiest skyscraper. We follow four groups throughout the movie from the experts, played by Paul Giamatti and his team at Caltech, Ray and his ex-wife finding their daughter, their daughter and the two brothers that escaped the building and ex-wife’s fiance Daniel. This movie is almost two hours long so it can sustain those story lines rather well (in comparison to other disaster film plots). 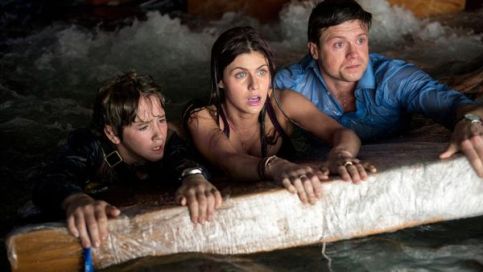 I’m not an expert in earthquakes and tectonic plates, even US geography and where the fault lines are and all that stuff, so I’m not going to talk about how sound the expert (played by Paul Giamatti) and his research worked here.  Like I said, there is a bit of suspending belief so I’m not sure I have to understand in depth but I got the idea so you knew that imminent dangers was hitting across that area. However, I do have to give it to San Andreas that its special effects were quite spot-on.  Sometimes, there are some cheesy or bad effects but this one made it rather believable.  If there’s any truth to this, if anything like this happens, Caltech is the place you want to be 😉 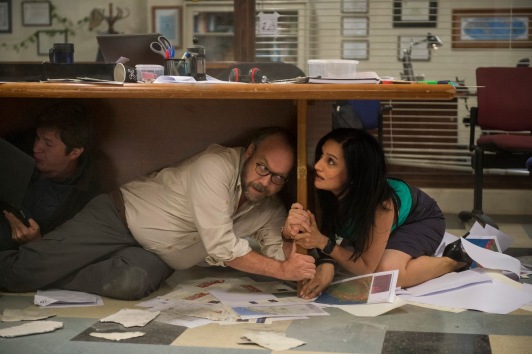 Overall, San Andreas is a pretty decent disaster movie.  A good part of that goes out to the great cast.  I personally love Dwayne Johnson and Paul Giamatti a lot so they already had extra points before the movie started.  It satisfied that disaster movie craving and actually exceeded what I expected to be much more fun with some good effects and smart characters that I was able to enjoy it even more.

Have you seen San Andreas? What are your thoughts? Do you enjoy watching disaster films?