So…umm…I’m going to be absolutely honest and say that my intention was to watch Bates Motel but we ran out of Hong Kong series to watch for dinner last week so I chromecasted Downton Abbey because its more gentle than Bates Motel so my mom wouldn’t be grossed out and wonder what I was watching in my spare time.  I may be 28 but my mom’s judgement still has an effect on me.  Its a little sad (and pathetic).  Regardless, I started Downton Abbey and the binge starts….

We enter Downton Abbey right after the unsinkable Titanic has sunk, taking the lives of the heir for Downton Abbey of Robert Crawley, putting his eldest daughter’s future suddenly into jeopardy as their money goes now to the next male relative. Much to the reluctance of the ladies and less to Robert Crawley, they ask Matthew Crawley and his mother, a distant and unknown cousin to prepare for his position as the heir, even though he isn’t quite fond of this new position either.  While the lords and ladies accustom themselves to this predicament, the servants of the household also struggle with their own issue: trying to pursue a better future, move on top and deal with their own issues.

I love series set in the olden days with elegant language and clothes and style.  Its just all around a pleasure to watch.  Its probably why I love the whole Jane Austen thing and a ton of classics adaptations.  Downton Abbey is in a league of its own.  When it first started, it reminded me a little of the Hong Kong TV dramas set in the ancient China times because other than the location and setup being different, it focuses on the main family and their heir and there’s also the servants that always stir shit up.  Sorry for using such inelegant language for this review but I really don’t know how else to say it.  But, with this situation, it puts an emphasis on whether the “villainous” ones are so horribly bad that they elevate the problem.  Downton Abbey has a really good control and balance of these moments and thats probably why I liked it quite a bit. 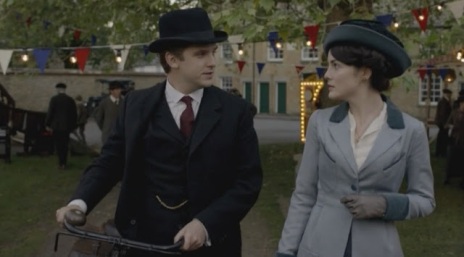 There is a few more specific reasons as to why I like Downton Abbey and this is completely focused on what I’ve seen on Season 1. One of the reasons is the cast and characters themselves are so good.

For one, Dan Stevens (before The Guest) still very cute.  Not quite as attractive manly but Matthew Crawley is just such a sophisticated character, especially compared to and playing this role across from a character like Mary Crawley, who doesn’t quite know what she wants but has an extremely competitive and stubborn nature.  Whether you want Mary and Matthew to be together or not in Season 1 (I know a ton of you are way further), the chemistry they build is pretty good.

And the pairings don’t stop at that. The characters are believable together because they cover for each other’s faults.  Just like Earl of Crawley and his wife, Cora or with the servants, Bates and Anna.  There are secrets and mysteries while watching the relationship grow as days turn into months that go by.

Another thing that I love was Maggie Smith as Countess Dowager.  That question up there made me laugh a lot and she has a ton of these little one liners that just crack me up.  At the same time, this also shows the transition of how Matthew Crawley’s arrival creates a lot of character development not only for him but everyone else as they adjust to his city life and independent commoner lifestyle.  Another thing this does, is that the feud between old women are funny, especially with Countess Dowager and Matthew’s mother.

Downton Abbey wouldn’t be as fun to watch if it wasn’t for these two up there, O’Brien and Thomas (exclude the girl in the gif, I just liked this scene). They cause a whole lot of crap to go down with the servants and they are responsible for a lot of rumors floating about as well.  You know they did a fantastic job as ridiculous human beings when as the series progressed, I increasingly wanted to slap them in the face when they were scheming, especially when it was against Bates (played by Brendan Coyle, who I loved in North and South).

Aside from that, this brings up the whole heir thing looming over everyone’s heads, while having a bit of the sibling rivalry between the daughters and the servants, especially O’Brien and Thomas trying to keep their positions secured, or Bates trying to keep a secret while attempting to resist his affections for Anna (also a character I love).  There’s the clueless manipulation of the simpler characters as well and the clash of opinions and beliefs.  There’s a lot going on in Downton Abbey but it never becomes overwhelming because it flows so well over the 7 episodes in Season 1.

With a beautiful set, charming (and at times evil) characters, lovely costume designs and a intriguing and compelling story mixed with romance, family and power, there’s a lot of great moments in Downton Abbey in Season 1.   A great start for this series and I can see why its still going on.  Plus, the ending of Season 1 pretty much opened up the plot to go into some more intense territory.  I’m looking forward to binging Season 2! 🙂

Have you seen Downton Abbey? What are your thoughts? Are you up to date with it?