If you are not the millions and billions of “fanboys” of Star Wars, I think you may have just arrived at the good review.  Before we go into this, we’re going spoiler free (as always) for Star Wars and on a completely honest level, I’ve only seen Episode 1 The Phantom Menace and parts of Attack of the Clones and Return of the Jedi.  Its been so long that I don’t even remember much other than Jar Jar Binks, Luke Skywalker, Yoda, Anakin Skywalker, and Darth Vader and that Hayden Christensen, Ewan McGregor and Harrison Ford is part of this along with a hairy creature called Chewbacca and two robots/droids called C3P0 and R2D2.  The only reason I went to this was for my friends and standing in line for 2 hours was tons of fun catching up and whatnot. But, this review is from an *almost* first timer experience.

I went with actual first time viewers also along with seasoned fans and we did discuss it a little afterwards.  Judge me all you want for my lack of knowledge in Star Wars but I will promise that I will get on watching all the previous episodes and rewatching this to give a more fan-based sort of review eventually. However, I do think that I can be more objective because I’m going in with an almost fresh view of this.

Three decades after the defeat of the Galactic Empire, a new threat arises. The First Order attempts to rule the galaxy and only a rag-tag group of heroes can stop them, along with the help of the Resistance. – IMDB

Star Wars: The Force Awakens is episode 7 of this pretty phenomenal franchise that has a huge fan-base. As you can see, I’m not a fan mostly because my exposure to it has been limited.  I just wasn’t brought up with Star Wars.  This movie is also supposed to be THE blockbuster of the year.  Especially with J.J. Abrams directing it and bringing it back to life. Now, I may have skimmed a few reviews before going into this one and some of them do talk about giving credit that first time viewers will appreciate it as much as the fans.  That statement, I disagree with. The Force Awakens does almost nothing to introduce to the situation.  It throws you into the world that has been built 30 years after the events with a lot of action.  Its with this, I make one statement about the storyline.  I wish it did more to pull in the new generation of viewers of people who don’t know much about it without having to throw down $100 and plus to see the complete 6 movies beforehand. I’m not only saying it because I was confused and it took a lot of effort to understand what was going on and what led to this but because the first time viewers that my two friends were, came out feeling like there was no beginning and no end to what they saw. 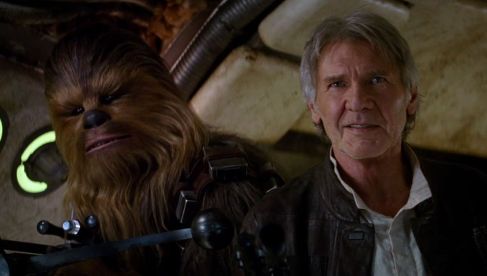 Now, does that mean that I discredit the movie completely? No. The Force Awakens is a good effort.  Putting the story aside, which I think is highly rated only because of its hype, the cast is done well.  I also appreciated the action sequences a lot.  There was a lot to love about the characters they put showed and especially with the modern day, we still have a lot of quality effects with a decent story to go alongside it.  I can’t discredit the story because I don’t know what came before.  It seems like it was a solid balance that they tried to put together and for that, I respect this episode of Star Wars. Even with my limited knowledge, I really loved that they brought back the Millenium Falcon and Harrison Ford as Hans Solo along with his pal Chewbacca had some really great scenes together. The new generation also wasn’t bad.  I couldn’t help thinking that Daisy Ridley who plays our new heroine, Rey in The Force Awakens looked a lot like Keira Knightley but I did think that her character was done well.  This also includes the fun interaction and partnership with our new young guy here, Finn, played by John Boyega. When old meets new, if you even have a little of exposure of Star Wars, these iconic characters will resonate even with the relatively newer viewers that aren’t die-hard fans.

I’m not going to go into depth with this.  Star Wars: The Force Awakens had all-time favorite bit and that was the little droid, BB-8.  That little guy is adorable and gave me a ton of laughs.  BB-8 and Chewbacca both have that same sort of making sounds while our cast understands what they are saying. Those are some of the best scenes.  However, my issue with this movie was the length.  It just dragged on and on.  I’m not going to lie.  I was tired when I went into this and I passed out somewhere in the middle where something was supposed to be resolved and they ran off and when I woke up again, it was done and I was at a key finale scene rolling into the final fight and whatnot. At least I didn’t miss any key parts, right? After that first hour was when I started feeling like my focus was wavering a little.  Its a problem I have with long movies (same as with James Bond movies for example), where there’s one plot and then it goes onto another plot line to extend it. One of the girls did ask if one of the action sequences was dragged out so not exactly just a “me” problem apparently.

Here is a good spot to end this little write-up though.  If you have no exposure to the original franchise, I think it may get complicated to start with this one.  Although, in all honestly, why would you do it unless you had another objective (like me for my friend’s birthday gathering).  Although, I do seem to criticize it a little and I’m not hyped up like all of the fans out there, there are a lot of good for The Force Awakens and I do want to do it justice with a more thorough review when I catch up with the previous episodes and come back more knowledgeable and invested so that I can actually connect with the characters more and actually care about their life and death because I only really cared about  Hans Solo, Chewbacca and BB-8. I think I missed the point of Star Wars but like I said, I believe that it does deserve a second viewing to fully appreciate this for what it is and to be more fair for the quality of this one.

Have you seen Star Wars: The Force Awakens? Are you a fan? Did you like it?

Next up is my S selection.  A little bit of a hesitation as I walk into the last few letters.  Mainly because I’m not sure what I’m in the mood for.  Have you seen the original Sabrina with Audrey Hepburn? I reviewed it HERE. I love Audrey Hepburn.  She is absolutely fantastic and inspiring.  That movie was the first movie of Humphrey Bogart that I ever saw.  So yeah, it was quite the memory.  Some of you commented that this 1995 remake was better.  I don’t know if I can agree but I’m giving it a shot now 😉

An ugly duckling having undergone a remarkable change, still harbors feelings for her crush: a carefree playboy, but not before his business-focused brother has something to say about it.-IMDB

Its hard to go into Sabrina after seeing the original and not make a comparison.  It is a remake after all.  I saw the original Sabrina with Audrey Hepburn, Humphrey Bogart and William Holden a little over a year ago.  This year, this 1995 version that a few of you had mention you enjoyed more, landed on Netflix and what better time to add it to this line-up. Now, its hard to not be skeptical with a perfect cast like the original’s to go to watching Julia Ormond, Harrison Ford and especially Greg Kinnear.  I always think the expectations you walk into a movie affects how you evaluate it.  This might seem like a ramble but this cast, while still rather charming, doesn’t seem to match up quite so much.  With lesser expectations despite the talented cast, I tried to stay optimistic. 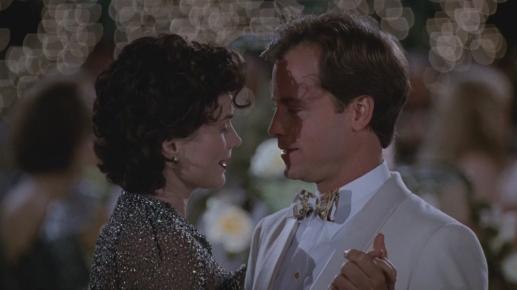 1995 Sabrina is set in the 90s with the plot being widely the same thing.  The story has not too many flaws and if anything, the remake focuses a bit more on Sabrina and Linus’s relationship than the previous.  My memory could be playing games with me. Let’s put it this way from what I remember of the 1950s version to this one. What the original did well, this one lacks a little bit more on. For example, this one builds well on the story to give its character some chemistry but on casting and acting wise, Julia Ormond has a hard time comparing to Audrey Hepburn.  Harrison Ford is alright as Linus.  He can be serious and a ruthless businessman.  No issues pulling that off but he can also be that man that changes into something more. However, Those two aren’t even my issues, Greg Kinnear was exactly as I expected, he didn’t match up to William Holden’s charm.  The role of David Larrabee is a man of style and charm.  He is all about fun and games and irresponsible.  You know, the lesser son in a rich family that splurges on things and never steps in the office.  I fully believe that if I lived in the 1950s, William Holden could sweep me off my feet any day. I mean, he’s be the fantasy guy that Sabrina would dream about, who knew the perfect way to woo a girl into his bed.  Greg Kinnear…not so much. He’s not a bad actor but he just doesn’t fit the role. I mean, Sabrina had more chemistry and I honestly liked the French photographer guy who liked her in Paris more than when she was with David.

However, this remake has a few things going for it. One, it keeps a very elegant and charming music to match its scenes.  And two, it gives focus to Linus’s character more.  Harrison Ford is not Humphrey Bogart but they both have a different style to add to the character.  For me, while Harrison Ford doesn’t do the same as Bogart’s portrayal, I actually do like it a little more. Maybe its because we are given time to warm up to him.  Plus, the way the shots were done with their interaction really makes it deepen a relationship that both of them, especially Linus didn’t realize was happening. Those little nuances that they played with worked really well.

I’m talking a lot about the characters for this one and its really all I have to say about it.  A remake is so similar in the storyline except for the decade that changes makes it hard to comment on .  Sabrina is like the ugly duckling mixed Cinderella and it works for me.  I can’t quite decide which I prefer more.  I actually think that other than my extremely love with Audrey Hepburn and a better portrayal of William Holden that makes me want to watch Sabrina, I still think that this remake is a little more fun to watch (and maybe a little goofy and cheesy also).

Have you seen the original? How about this remake? Did you like it?