Moving right along in the incredible attempt to catch up with Once Upon a Time, I wrapped up Season 5. Once Upon a Time continues to twists up some of the tales and puts together some interesting pairings which is one thing that I love the most about the show. Plus, after so many years, its hard to not love a lot of the characters. It also helps that last year I did end up going to visit the little town that its shot in in Vancouver and totally fangirled which makes seeing Storybrooke so much more personal (in my mind).

Maybe its the fact that hopping back to this that I forgot how packed Once Upon a Time but Season 5 feels like there is a vast amount of characters that traverse the path in the few villains they do cross. As a little season 5 recap, the season picks up where the 4th ends with Emma taking the responsibility to be the Dark One and gets sent back to The Enchanted Forest. The rest of her family finds a way back and they eventually end up in Camelot where they meet King Arthur and Queen Guinevere. They have a secret to complete that involves the search for the Dark One. Somehow they get sent back to Storybrooke and Emma has lost the fight and has embraced has her dark side while wiping away everyone’s memory. A course of events sends Hook to the Underworld where they also follow and get trapped by Hades and confront some of their own people they have lost. When they do find a way back to Storybrooke, they get tricked and sent to The Land of Untold Stories where they meet the infamous Dr. Jekyll and Mr. Hyde. I think that about covers the general outline. 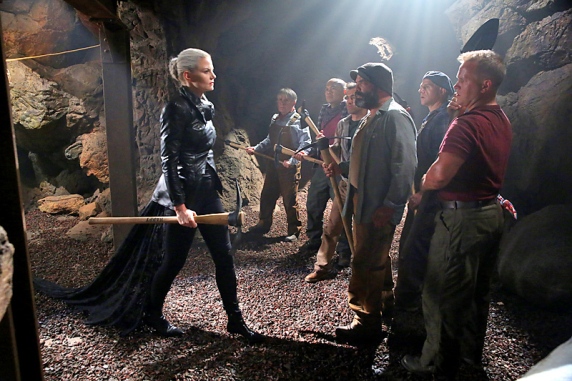 Season 5 is crazy packed as everyone embarks on a journey about their value and whether they are good and evil and being okay with who they are. Some extremities are taken which of course take a turn for a bad the lingers into the next season. Fairy tales are about happy endings and if Once Upon a Time has taught us anything, its that they are quite the rare occurrence in the show especially when it involves Regina and Emma. Being the Savior or a Villain both doesn’t give you the merit to have the happy ending. However, Season 5 may feel packed but its great to see the twists on these characters. In fact it expands on these characters as they also meet Merida and help her with her quest to become queen of Dunbroch.  We flash back to see Mulan and Red Riding Hood and Dorothy and their connection to everything. Of course, it wouldn’t be this show without Rumplestiltskin and his secrets along with trying to get back Belle which also sees a twist on her story and Gaston. Snow also once knew Hercules as well. We see some characters exit the show as well as the Underworld allows some characters to eventually either move on in a good or bad way. Thinking back to the season feels really busy but at times, that is what works to keep us on our toes and always learning that this world still has a lot to offer as they can breakaway from the fairy tales as well as take characters from classics. That is the magic of why I love Once Upon a Time.

The villain this season did have quite a spark. I have to say that in the few times that I’ve seen Greg Germann, he’s always been so fun to watch. This time, he plays Hades and not only does he resemble how Hades looked in Disney’s Hercules but he does take on that villainous role really well. Talking about villains, while I did enjoy the whole Dr. Jekyll and Mr. Hyde bit, the way Mr. Hyde talked was so grating and annoying. If anything, that was the only thing I didn’t like about this season. Once Upon a Time also has these villains that are truly horrible and ruthless. However, they also have this story that gives them a moment of hope for redemption and its always that unknown of whether it will happen or not. Another point of why I do like Once Upon a Time a lot is dealing with the character development and this season may be busy but a lot of the characters had their moment to truly see their thoughts and things they haven’t been able to let go of and in many ways, they did embrace themselves.

Overall, Season 5 was a lot of fun. While you could argue that the huge amount of characters made the story very scattered, somehow it still works very well to keep it fun and adventurous to watch as our characters grew and truly embraced issues that bothered them and confronted their monsters both mentally and physically. A really nice collection of villains and heroes in Season 5 and I’m looking forward to watching Season 6.