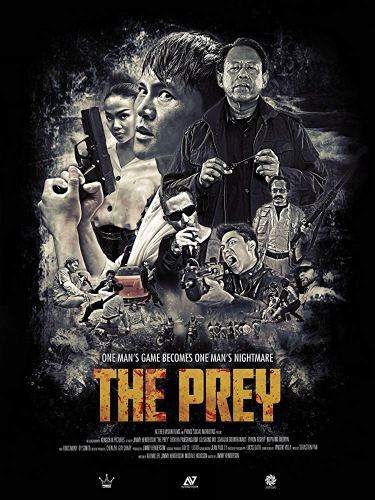 The Prey is a 2018 Cambodian action thriller about a corrupt warden that sets up a hunting game for rich men using the prisoners as their prey.

The Prey is essentially a cat and mouse game gone array from the original plans as they accidentally implement an undercover international Chinese cop into the mix. Xin (Shangwei Gu) is said cop that has spent his life catching criminals and suddenly needing to try to not be caught, especially as he also has taken to help out the other prisoner, Mony (Rous Mony) also sent out. As the three rich men go their separate ways to kill their prey and win the game, things turn around when Xin and Mony manages to turn the game around and kills one of the three hunters.

Xin is the star of the movie here. He has more brains than brawn and that works in the gun heavy action. He has a lot of grit and while there isn’t a lot of context to his background, its never necessary because his character development relies on how this prison, the warden and the game may or may not have changed him. Talking about the warden played by Vithaya Pansringarm, he makes quite an appearance, albeit fairly familiar type of character, but he truly captures the role well in the first act with Xin. His part is small compared to the three hunters, especially two of them, the army camouflage dressed Mat (Byron Bishop) and his nephew, Ti (Nophand Boonyai). The latter takes on more of the story as the movie goes into the more intense bits. His story gets a bit far-fetched, but somehow it also tries to give his character more depth.

The Cambodian jungles are a great location. The beginning of the story takes place in the prison but most of the movie is set in the vast jungles. The camera work right from the start is the highlight of the film. It manages to capture the vast spaces to the little places with angles from the ground to overhead shots or trailing cameras after its characters. It all helps make the action scenes better. Although the scenes are mostly gun fights, with some interesting weaponry to say the least, especially Ti’s choice of firearm. The background noise uses mostly its natural surroundings except for the action scenes which has varying background music from lighthearted music to contrast the ruthless moments to the more intense music in the final act to complement.

At the end of the day, The Prey has a lot of great technical elements to it. Where it falls short is in its story. It lacks character depth, probably a lesser problem as its more about the action bits, but probably its bigger problems is having a disjointed story. There are some decent gun fights and combat but it introduces characters that never give enough focus or enough of a tangent to make it all come together, making it less easy to commit and feel completely immersed.