Pirates marathon officially continues! After the success of Pirates of the Caribbean: The Curse of the Black Pearl, we have the sequel followed up by Dead’s Man Chest. Johnny Depp returns as the rogue Captain Jack Sparrow to explore and conquer difficulties in the Caribbeans with yet another set of adventures. I saw this one in theatres back in 2006 when it first released with my best friend. 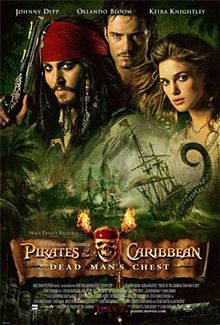 Gore Verbinski is back with this second instalment of Pirates of the Caribbean: Dead Man’s Chest! After the previous instalment with Will Turner (Orlando Bloom) and Elizabeth Swann (Keira Knightley) helps Captain Jack Sparrow (Johnny Depp) from being hung, they now are separated on their wedding day and held in jail under the order of  Lord Beckett (Tom Hollander).  However, he gives Will a deal that if he can bring back Jack’s compass then he will give them back their freedom.  When Will finally catches up with Jack Sparrow, he gets deceived into getting caught in the way to cheat his way out of Jack Sparrow’s release from the pursuit of Davy Jones (Bill Nighy), the captain of Flying Dutchman that homes a bunch of pirates living in the middle of life and death.   On the pursuit of a key that opens something, they end up going through a lot of fights and frantic escapes with each having their own agenda. 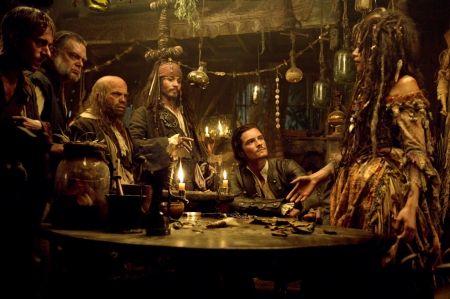 Dead Man’s Chest is the one in my memory that I loved the most! Gore Verbinski did a fantastic job in the first one and coming back as the director in the second one helps this one out a lot.  This time, he brings in a whole lot more fun and action.  What really catches me is the action mixed with funny moments.  The interaction is hilarious even the sword fights are hilarious. Plus, maybe its the initial thought of when I first saw this  movie in theatres, I was with my best friend and it had some really memorable moments that makes this movie feel even closer to my heart. 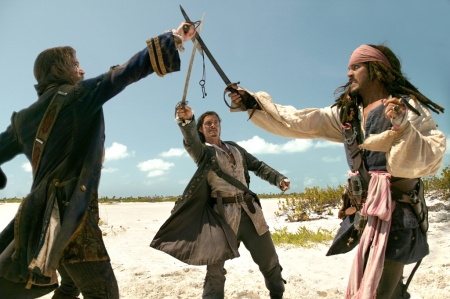 One thing that works for this sequel is the cast.  We have a lot of the initial cast sticking around but after the first’s quest, they have grown and matured.  I’m all about character development and if anything, as much as it was a development in Jack Sparrow’s character, we also see the deeper side of Elizabeth Swann and Will Turner, not together but being independent of each other. Jack Sparrow is still the crazy, unexpected pirate who is obsessed over rum, lies about everything to everyone and is confused as always.  This time around, I started feeling that Jack Sparrow in Pirates is equivalent to John McClane in Die Hard.  Its what keeps the audience intrigued because he not only brings us action but he also brings us laughs 🙂 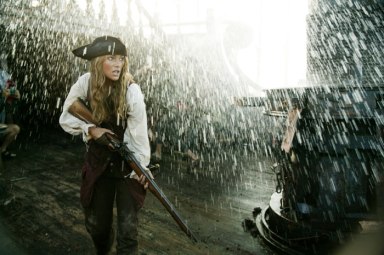 Another reason that I love Pirates is because yes, Orlando Bloom is hot but I do love Keira Knightley.  She is an awesome actress and I possibly own *almost* all of her movies.  I haven’t seen them all but she’s always quite impressive as her roles vary in character and style.  In this one, she starts off as the rebellious governor’s daughter and eventually finds that her true nature is quite like a pirate but then, she still finds the men around her quite silly at times, and childish.  Its a really charming and likable character. 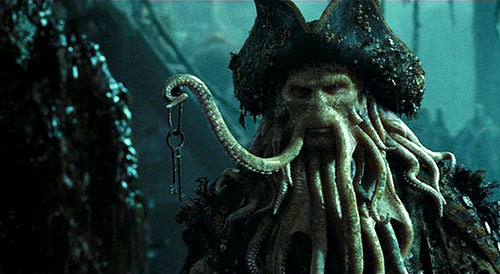 Additonal mentions go out to Bill Nighy who plays Davy Jones.  What actually makes me laugh when I watch this movie is remembering how my best friend’s comment that Davy Jones was attractive. LOL! Weird tastes! Even Bill Nighy in real person would not make me connect with “attractive” but he was a mean and awesome character.  I love Davy Jones! He made the movie even better than it already was in my book 🙂 Plus, we have Stellan Skarsgard.  He`s not in it a whole lot but he plays a pretty awesome Bootstrap Bill and Will’s father.

So far, on this rewatch, Dead Man’s Chest is still more entertaining than the first one.  I love them both a lot but this one seems more fun and I really loved this villain a whole lot more.

I know there’s a lot of mixed reviews on this one.  What do you think about Dead Man’s Chest? Do you think the original is better?

Back in April, I posted up this review as a guest contributor over at Tyson`s Head in a Vice.  However, as he has changed the direction of his blog and decided to take down that project.  I have carried over the review over here! If you haven`t read this, then here is your chance! If you have read it, please had on over to Head in a Vice because its an awesome blog! You will love every minute of it 🙂 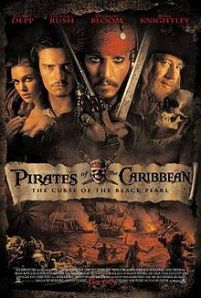 Director: Gore Verbinski
Cast: Johnny Depp, Keira Knightley, Orlando Bloom, Geoffrey Rush
When a young boy Will is picked up by a government ship by Commissioner Swann and his crew, his daughter Elizabeth Swann hides the pirate golden coin around his neck to protect him.  Years later when they are older, Elizabeth (Keira Knightley) looks at this secret coin and chooses to wear it around her neck, which sends off an invisible signal to the pirate ship, Black Pearl and causes her to be kidnapped.  Amongst the chaos, Will (Orlando Bloom) teams up with Captain Jack Sparrow (Johnny Depp) who was left marooned on an abandoned island because of the captain of the Black Pearl and is on a quest to seek it as well.  On the Black Pearl, Elizabeth meets Captain Barbossa (Geoffrey Rush) and learns that the crew is cursed because of their greed and this is why they need to get back the last coin to undo the curse. 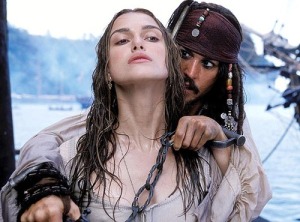 I love the Pirates of the Caribbean movies.  Its always fun and it has Johnny Depp in one of his best roles.  He has some epic lines and he’s so happy-go-lucky and does some of the most surprising things.  Bring in Orlando Bloom fresh out from after handsome Legolas from Lord of the Rings trilogy and one of my favorite actresses, Keira Knightley and you’ve got me deeply in love with this series.  The fun factor gives me the opportunity to watch it over and over again.  Its somewhat turned into an annual marathon event. 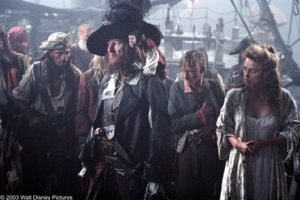 Although this one isn’t my favorite in this franchise, it does give a good start.  We get to see everyone and how they are built in the characters they become.  The characters in the most part are very witty and enjoyable.  They have very catchy dialogue especially Johnny Depp’s Captain Jack Sparrow and he matches it up with this awesome pirate accent.  Its has a great balance between adventure and humor. On the other hand, it also brings in questions of honesty and integrity and how far you would go to get what you want. 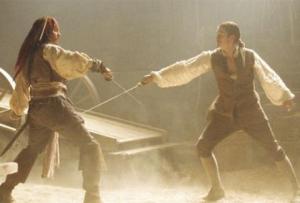 This review took me ages to write and its mostly because I loved it but I wasn’t really sure why I did and how to write it out. Its really fun, adventurous and funny.  Although in my opinion, the second one is the funniest one (but I know people might disagree with me).  However, this one really sets up the right path for the next one and that makes it total awesomeness.  Along with a great cast and we’re on our way to a great flick! Props to Disney for this one and giving us an iconic character in Jack Sparrow! Definitely one that I’d recommend for a fun time.
Just a little additional update…
Back in April, I had wanted to initiate a Pirates of the Caribbean marathon but I didn’t get to it! Just a heads up that I’ll be doing it soon! I already popped in the Pirates 2 into my player already 🙂 Just need to get a few reviews thats been sitting around up and then we’re in business to finish this up!