I have to admit that the only reason I saw this was because of Cory Monteith and how is passing brought a lot of attention to this movie.  Who knew sitting on the plane would mean I could catch up with Canadian productions? Although, this one does get a little in the dark and slow side.  Either way, I didn’t know that before it started and there was more than one surprise 😉

Lets start with a little synopsis!

An ensemble film about four everyday people: a store manager, a security guard, a fire fighter and a clerk who struggle in the aftermath of trauma.-IMDB

Thats a good start for a synopsis.  A store manager James Ascher (Cory Monteith) who wants to move up to be a regional manager.  While on the side, he deals with his wife, Kate Ascher (Karine Vanasse) who is eyes of the store he manages but has people intimacy issues and doesn’t want to be touched after a family tragedy.  However, the new recruit as store clerk, Nicole (Emily Hampshire) seeks to salvage whatever feelings of youth she has and drowns herself in irresponsible actions and spendings while struggling to take care of her son and ends up seducing James.  Finally, there is the amputated and physically recuperating firefighter, Simon (Kevin Zegers) looking to regain his position at the fire department while working temporarily at the store as security. He and Kate slowly confide in each other as they learn to get pass the traumas they have both gone through.

I watched All the Wrong Reasons over a month ago and its fading a little in my memory (which probably isn’t a good thing). I just felt like I needed to write about it because I’m going to say that although this movie isn’t really for a lot of people, if you can find a deeper meaning to it all, which I did because I had lots of time on a 14 hours flight to ponder my life, it actually felt real.  Real in the sense that its portraying a bunch of flawed people in the world living their everyday lives each with one aspect of their life magnified and obsessed over.  In a world where people can be influenced by others, who need others and grow in good or bad ways depending on the influences.

As I was going off on a ramble up there, thats kind of what I think this movie is trying to say.  I’m not completely sure either but these people all have this skewed view of life.  Cory Monteith’s James and Emily Hampshire’s Nicole being the best in the world of lost and confused and really aiming hard to find a reasons to mess up their lives monumentally without really thinking that its wrong.  You know, getting caught up in the moments that feel so good but are just so toxic for you? James Ascher is that dick of a manager who is so fake that you can see it when he smiles.  He wants to  look good so bad that he doesn’t even know it when he has even lost who he really is and when he loses the uptight act, well, he loses control completely because before you know it, he’s manipulated by the woman who acts like she’s real sweet but actually will do ridiculous things before she’s even put any thought to it and turns everything upside down.  You get the idea, right? Just not such pleasant human beings….

I’m skipping ahead of myself.  I should probably justify why this movie might not be for everyone.  For one, its really heavy and extremely slow.  I had a lot of saved up patience working here because of the length of the flight (and being on vacation helps also).  Either way, this movie moves along really slowly and doesn’t really link everyone together, other than the fact that they work together and that James and Kate are a couple for a while as it tries to give us an idea of everyone’s story. However, the second half of the movie (approximately) does pull itself together and ends this thing in a pretty acceptable way and I actually had a pretty good laugh while having a rather intense moment also. Maybe its just because the characters of Simon and Kate connected with me a lot more and I just really was cheering them on. 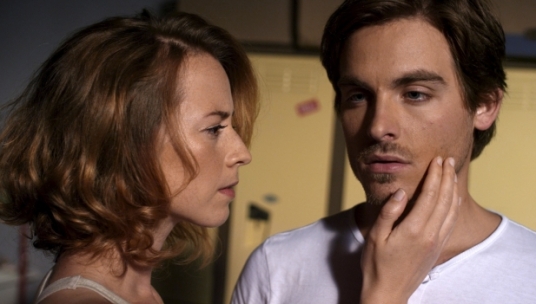 While we’re on the subject of Karine Vanasse’s Kate and Kevin Zegers’s Simon, they were possibly the best part of this movie.  I’m not huge on Quebec productions but I’m slowly learning more about them and in all honesty, Karine Vanasse never disappoints me.  At least, so far she hasn’t.  She was my surprise in this one (the one I mentioned in the beginning). You can check out my review of  her other movie which is also one of my faves, My Daughter My Angel HERE. Honestly, when I first saw her here, the surprise came with a little doubt of not being sure how she’d handle the whole English speaking movie but then they also gave her some “random” French speaking moments.   Kate went through a lot of crap and the family trauma she went through caused so much damage that she was scared to literally touch someone else.  We soon realize that it was probably a deeper issue that needed a bit more understanding and care and even trust and the feeling of not getting hurt.  Sure, it was awkward to watch as Simon stood still while she touched him gently but there were times those moments felt like they gave out more than it was just showing and I felt like there was a deeper connection between the characters.  Kate’s story appealed to me the most but in hand, it had to be given to Simon’s character.  Simon was a really good character.  He was really in a similar situation to Kate but his trauma was mentally just accepting himself again with an amputated limb and living with that.

There’s a lot of deeper feelings trying to be portrayed in All the Wrong Reasons.  For that, I feel like if you connect with the characters successfully to whatever extent, the enjoyment will be there.  This movie throws punches at its audience and sets everything so slow that maybe everything gets lost in translation.  Maybe there was even a lot of beyond the lines and not enough shown.  I’m totally basing this on how I felt about it but then maybe Gia Milani (director and screenwriter) wasn’t even trying to show that.  What I’m trying to say is that All the Wrong Reasons is not a perfect movie and its far from it.  Its an average drama that tries to trigger some emotions about the crazy stuff normal everyday people have gone through.  Everyone has their own story and their own ambitions and even their own hidden fears that maybe they don’t know about.  They aren’t perfect and they try everyday to seem like everyday is fine and live in their comfort zone.  There’s a lot that I think is trying to be said here but it is a little fuzzy at times 😉 But the ending really does make up for the whole crazy process of it 🙂

I really don’t know how to end this.  If any of what I said appeals to you, you should check it out.  No strong recommendations either.  I’m sure not rushing out to grab it off the store shelves (but thats because I don’t watch dramas too much) but I’m pretty sure one of these days, I will pick it up and want to rewatch it because I felt there was some strong performances.

Have you seen All the Wrong Reasons? If you have, am I overthinking the whole thing?