It feels like forever since I’ve done an unboxing.  But its weird because the month went by really fast.  Maybe its just I’ve been so focused on movie reviews that I forgot about all the other side segments that aren’t as frequent.  Regardless, we’re here! I got both my blocks together.  One of them is my new subscription which will show up a little later this week (hint: Friday).  I really want to keep this one in the September so its truly fresh off the press here.  I got it on Monday, unboxed last night and here we are with the post up for all of you lovelies! 🙂

Let’s give it a go, shall we? We were promised some pretty awesome gear so I was looking forward to it!

We start this box with the first thing being a Goomba Plush.  I love Mario! I just love it! Every time I get some Mario related gear I just fill up with joy! 🙂 Isn’t it uber cute! Its now situated right on my table lamp.

I’m thinking this is some Minecraft related gear.  Something about chasing chickens and although I don’t play Minecraft, I kind of remember seeing chickens.  Am I wrong? Either way, this is a little thing for the car dashboard or whatever surface, I guess? I’m not sure I want to add a springy chicken to anything… What about you? 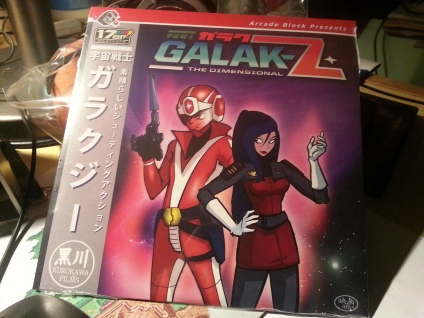 Anyone own a record player? Well, I do..kind of.  At my mom’s.  I don’t know what Galak-Z is but I sure want to know so I’ll try to borrow that over to my place. But, Arcade Block was extremely thorough and gave us a little card with a “sweet” deal on a turntable.  I’m not even going to go surf it though because I’m not sure I’m prepared to be wowed by the prices just yet 😉 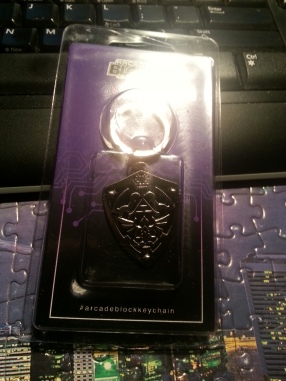 Remember last block, I talked about how Zelda is going to be a big theme in this block? Well, next three items is all about it!

We start first with a beautiful key chain.  And you can even use it as a pendant if you so wish.  Now that is pretty nifty.  Plus, the design looks really good so among all the key chains we’ve gotten from these blocks and boxes, this one really does appeal the most. 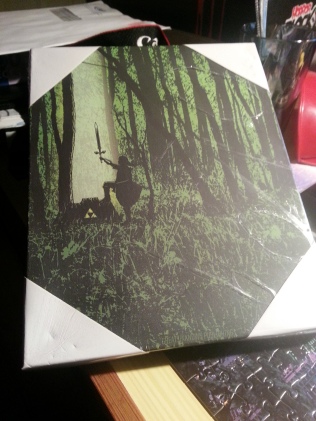 Perfect timing! That was the first thought in both me and my fiance’s thoughts when we saw this.  Right when we were thinking that we’ll have rather bare walls for visiting family during our wedding visits, we received a lovely canvas.  I have yet to play any Zelda but this canvas looks so awesome! I love the colors and artwork.  Its just awesome! 🙂 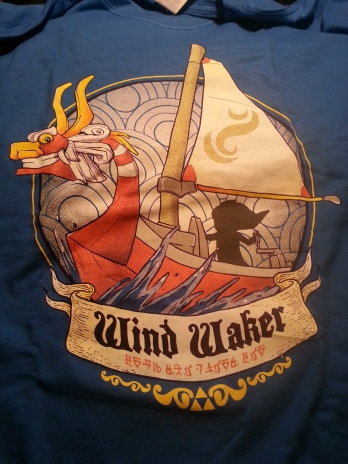 Legend of Zelda T-Shirt is what we got this time around.  I pretty much guessed this one but I have to say, the design on this one is pretty great.  If you can’t see it clearly, the shirt is an indigo/light blue sort of color but I love that ship design.  Its very creative! 🙂

This block was almost 85% exclusive gear.  I think that might make this block rather valuable whether in collectibles or whatnot.  Pretty cool, eh?

What did you think about this box? What gear do you like?

P.S. There’s also a promo card in there saying that there will be a Sci-fi Block launching in November with some Star Wars: The Force Awakens Funko Pop and a Celebrity Autograph and a little more… Usually, I don’t mention these things but that sounds pretty groovy.