A lot of you didn’t fail me when you told me that Part 6 was one of the best movies in Friday the 13th.  Apparently, its supposed to fall apart of this one also? Excuse me when I’m trying to not think about that.  Especially when my boyfriend couldn’t even remember if he liked this one or not.

Still, fingers crossed that it’ll be decent.  I already don’t hold particularly high expectations as this was done almost the same years as I’ve been alive.

Tina (Lar Park-Lincoln) returns to her childhood summer home with her mother and her psychiatrist where she believes she caused the death of her father because of her uncontrolled telekinesis when she was a little girl.  Next door, the house is rented by a group of young adults/teens (or whatever age group they are) want to throw a surprise party for a guy that never shows up (and you know why already, right?). Tina has these fits as she’s undergoing therapy and mistakenly uses it to release the dormant Jason Voorhees trapped since the previous movie.  Coming back rotten and even more supernatural than the last one, he continues his killing spree as he chases and tries to kill everyone. Will Tina’s telekinesis be enough to fight against Jason?

The New Blood started off a little weird and sketchy if I’m being honest.  Then it kind of has some bad acting, which is okay because its pretty much expected after six movies (and even during those ones).  The whole telekinetic thing was really a completely funky tangent to use.  There were also some technicalities that didn’t really make sense like the ending.  Still, I can’t help but think that this was still pretty entertaining. 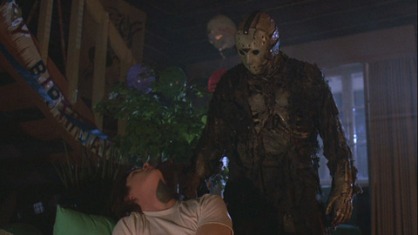 Jason keeps a lot of good details.  I mean, he’s been rotting at the bottom of Crystal Lake so he shows obvious signs of that from the tattered clothes and rotting hands and you can even see the exposed bones.  Then if you remember the ending of the last one where he has the motor chop his face or neck (or somewhere around there), the mask carries on with that.  On top of that, Jason Voorhees is a freaking supernatural zombie to the max now and he actually is a pretty menacing size.

Despite not totally buying the whole telekinetic business and the ending was really stretching it, the process of watching this was pretty good.  The kills are pretty cool, the characters are alright and you know what really made me realize how I was pulled into this? When a character totally pissed me off (the dude up there) and I kept cheering on for Jason to show up and chop him up.  Sounds mean? If you’ve seen this, you know he truly does deserve it.

Overall, Part 7 isn’t quite as impressive as how I felt about Part 2, 4, 6 but its still a relatively good one.  The telekinesis thing really ended up working out and the main character(although she was pretty stupid and made some pretty stupid choices) was pretty good.  Her out of control powers gave this a special twist.  The entertaining factor can definitely be found in bits and part of this one and it was a lot better than I expected.  All this is a plus to this series.  I’m going to accept decent viewing experience to be good at this point because the expectations are starting to waiver a little.

Have you seen Part 7 The New Blood? I really think the appreciation for this one could go both ways so did you like it or not?