Judging from the comments, Part 6 is possibly the most loved in the blogging world in this Friday the 13th franchise.  This being said, it was my most anticipated one because all of you have impeccable taste usually 🙂 Plus, after the pretty much failed Part 5 for  a so-called “A New Beginning”, it didn’t really make it promising.

Still, I remain optimistic and turned this on multiple times while because overcome with fatigue before actually watching this from start to finish on Monday night. I reassure that falling asleep during the movie has nothing to do with the movie but its purely because I was exhausted and at least for me, sleeping more is usually in my agenda during a long weekend.

Tommy Jarvis (Thom Matthews) is ready to end the haunting of Jason Voorhees in his life when he decides to go to the graveyard to destroy Jason’s body except he mistakenly brings him back to life instead.  Back as a supernatural zombie, Jason is back with an even greater vengeance.  As he makes his way back to Camp Crystal Lake which has changed its name to Camp Forest Green to forget the events thats happened there, Tommy comes back to try to stop Jason while the sheriff (David Kagen) doesn’t believe him and attempts to stop him.  On the other hand, the sheriff’s daughter Megan (Jennifer Cooke) decides to help him out.

I have to admit that when Jason came back to life.  That scene was above cheesy and silly but after that part, things turned for the better really quick and I started enjoying the movie for its absolutely awesome tone that its set.  For one, Jason is even more invincible as the undying self that he is.  He’s pretty much a zombie so nothing bothers him.  He’s also come back from the dead and really emphasizes on how much more vengeful he is by making the killings all turn bloody and way more violent.  Thats a pretty good change because it puts the slash back in slasher.  Does that make sense? Anyways, what I’m saying is that how they set it up is a little unbelievable as in how Jason is a zombie freakish dude but its a lot of fun to watch. At the same time, we’ve only seen Jason interact with Tommy when he was a kid that slaughtered him and now, there is a camp full of kids.  Changes the dynamics a little, no?

Other than buying into how Jason has evolved as the crazed killer, I like that they brought back Tommy Jarvis and this time as a more charming guy.  He’s still pretty stupid to begin with because if he didn’t dig up Jason, then Jason wouldn’t have risen from the dead a la Frankenstein style.  He kind of made this movie’s killing spree happen. Other than that, he’s not completely ridiculous.  I mean, he may be mentally disturbed and all from his youth but he still craves women. That part with Megan in the car was kind of funny in the cheesiest way.  I did like his character especially when he was playing off Megan’s character because it was a nice change in pace. 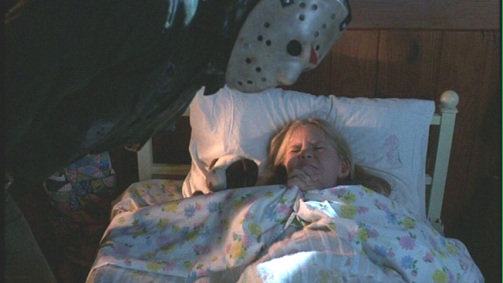 Friday the 13th, Part 6, Jason Lives has a lot of fun features to it.  Its relatively fast pace and show Jason as pretty invincible.  Tommy Jarvis gives the story a little continuity for the last few. The ending is pretty cool as well. Tommy has a nice method of figuring out how to end Jason once and for all.  Whats really nice is that between all its crazy killing and Jason’s violence, there are moments where its just in cheesy territory but enough to laugh just a little.  I found this one extremely enjoyable.

Good call on this one, you know who you are who praised this one 🙂

Have you seen Jason Lives? Do you think this one is one of the better parts in Friday the 13th franchise?