Right after the crazy horror movie Insidious that got me all freaked out, I went through my collection and picked out this comedy, The House Bunny.  The first time I saw this was actually the first time I saw Anna Faris plus I had heard about one of my friends saying they surprisingly enjoyed it.  At least it was a vague memory.  I remember my boyfriend and I closed it and thought that was some weird stuff. Still, I don’t know why I decided to check it out again…but I did!

Orphaned as a child but then brought to the Playboy Mansion to live because of her beauty, Shelley (Anna Faris) had planned to have her happy life there forever with Hef (Hugh Hefner) and the other girls.  On her 27th birthday, she wished to be a centerfold but to her surprise, she wakes up after her big party to a letter asking her to leave because she was too old.  In a twist of fate, she ends up becoming the house mother of the desperate and close to ending sorority Zeta.  Shelley teaches the group of misfits composed of Natalie (Emma Stone), Mona (Kat Dennings), Harmony (Katharine McPhee), Joanne (Rumer Willis) and co. how to be sexy and attract more attention from guys in order to get 30 pledges and raise enough money for their philanthropy before they lose their home. 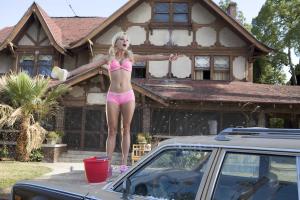 This one has a lot of potential to be really funny.  I still found it weird this time around but I found that its mostly some parts of Anna Faris’s humor I don’t get (sometimes).  After seeing her in Whats Your Number?, I know that she has a  different type of humor.  Its really her.  Plus, she always does quite daring roles where she has to expose her body a lot.  In this one, she does have to match up to being (or seem like) a blonde bimbo but actually have something more underneath .  Honestly, she really does a lot of it really well and even at times, she can get really silly  and it just grows on you (well, on me).   I started with rolling my eyes and facepalming to actually getting a lot of laughs from her jokes.

The girls who play the Zetas are pretty funny as well.  I mean a lot of it has to go to Emma Stone because she is a sweetheart on screen.  However, it is one of her earlier roles so nothing compares to what she can pull off for say, Easy A.  I love her in all her earlier roles as well.  She does exactly what the nerdy girls would do.  I mean I’ve been there and done that…maybe not sorority stuff since thats not how my university work (not sure if any in Canada are like that…).  Before and after the transformation, they still kept a lot of the humor here and there. I ended up enjoying in the way that I’d like Mean Girls.

There had to be a little bit of romance for Anna Faris’s Shelley that turns out to be a riot in the end.  And then we switch over and have a younger romance bloom with Emma Stone’s Natalie and her long time crush Colby.  Although the latter wasn’t very focused on as much.

As always, there is always a hidden meaning with these flicks.  This one focuses a lot on acknowledging on who we are on the outside and not let the superficial take over.  Its alright to be physically attractive but to not forget to be nice and not stop others from being themselves.  I like the message even though it was set in a comedy.

It may not be the most creative plot in the world but it has its goofy characters and if you like Anna Faris, I’m sure she’ll be worth the watch.  Second time around, this was pretty enjoyable.  You might get a few laughs from this 🙂

Have I asked about Anna Faris before? If I have, maybe you have some new thoughts.  What do you think about her? Do you think she has a unique type of humor? How about Emma Stone? Whats your favorite role of hers?