On to the final MTL a Table! Our last location was in Downtown Montreal at Taboo Cuisine Rebelle.

Taboo Cuisine Rebelle is a lounge style restaurant with a rather relaxing generally bite-size food offerings and intricate drinks. With that said, the service was slow. It felt like there wasn’t enough servers to occupy the tables especially in high traffic periods like the time we had dinner at around 6pm. At the same time, they also overbooked as it was mentioned when we arrived that we had another table reserved 2.5 hours after and we only ended up leaving very close to that time with the next party already waiting around the bar. However, a redeeming point between all the stress of leaving and the slow service and the rather lacking service as well as the fact that in the lounge setting the music was rather contained but was a comfortable background addition and the ambiance and lighting was rather decent.

Now to move on and look at the food… 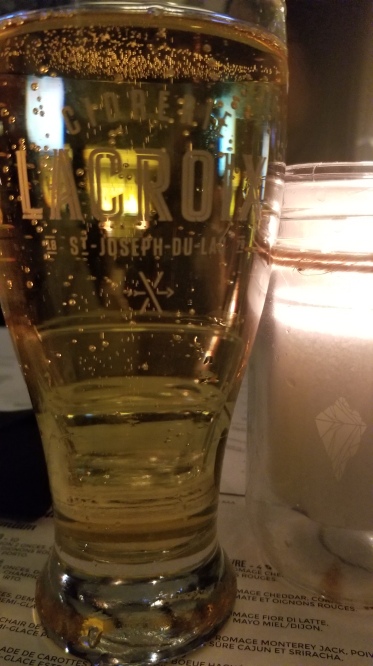 The Aeroplan privilege drink that was offered here was the Lacroix cider. We’ve never had this one before and it actually is on point with most of the Quebec ciders that we’ve had. Its not particularly overly sweet but it still is fairly good. 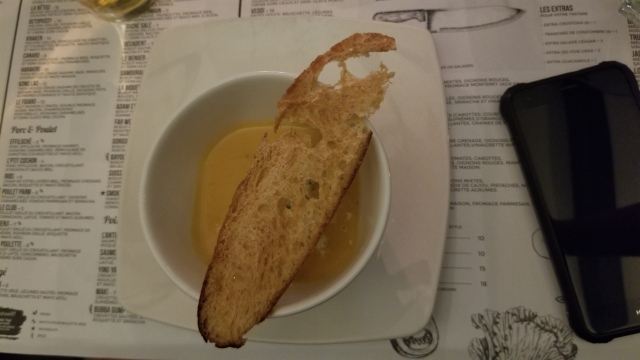 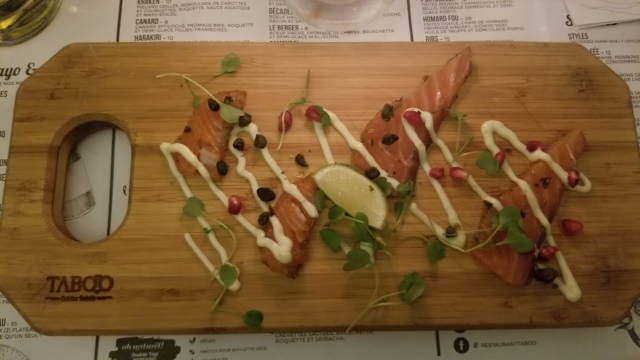 There was a choice of two appetizers. The husband had the soup where he found it good except that its for blue cheese lovers. For him, the blue cheese was a hurdle to appreciate the dish more than he would have wanted. As for the salmon gravlax which was my choice, it was very delicious. For someone not too huge on raw fish, this one packed a lot of flavors and depth in general from the crunch pomegranate to the delicious sauce, there was a lovely balance to it all. 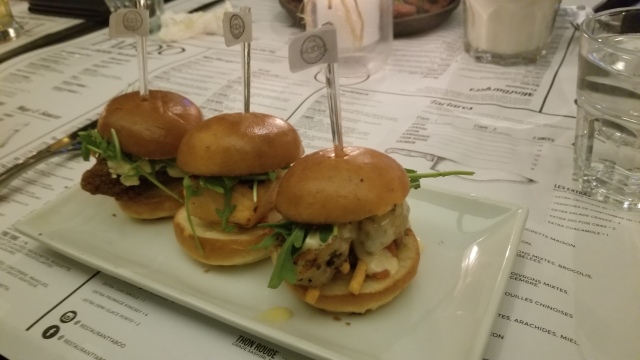 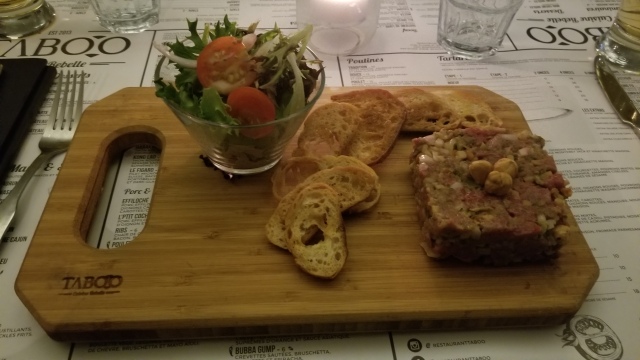 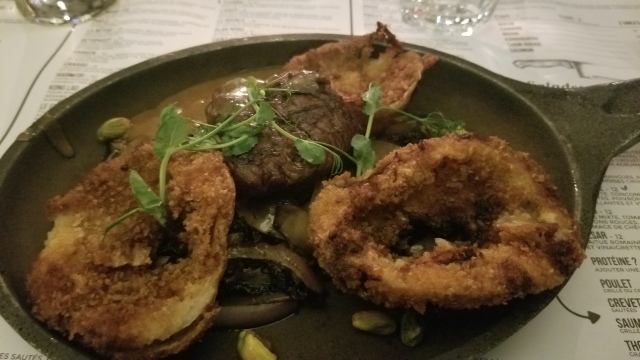 For the main course, the husband go the 3 mini burgers. The three burgers were each about 2 or 3 bites. His favorite was the Ying Yang which was a surprise as shrimp usually isn’t his favorite type of seafood. The next one is Antipasto which was pretty good as well however, he did not enjoy Benji because of the goat cheese which is a rather acquired taste ingredient. 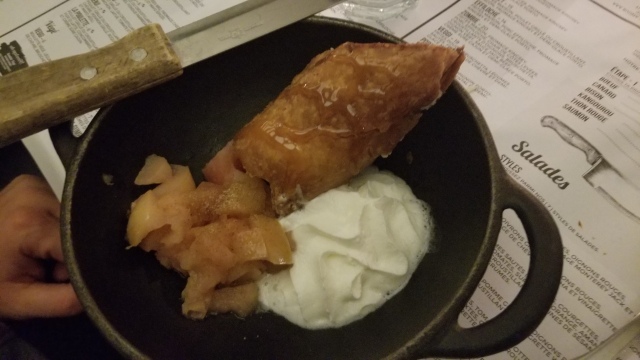 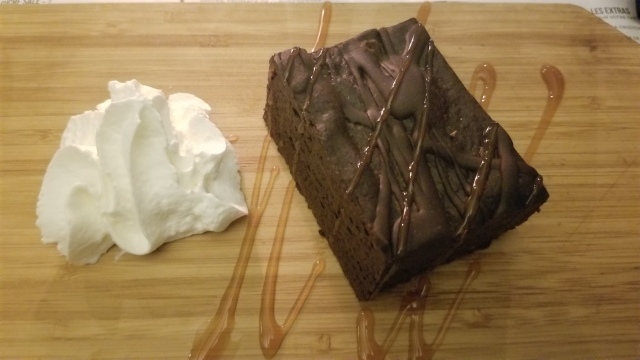 Finally, for the desserts, the husband had the very unique fried crepe with cheesecake which was the best part of the entire meal for him. As for myself, I had the incredibly moist and decadent vegan brownie which was heavenly and rich in chocolate goodness. It was also a big highlight for my meal here.

Overall, Taboo is a restaurant with a decent ambiance and a nice selection of finger food/bite-size mini burgers and such. Its normal prices are overpriced for sure for what it offers (ex. there is a $16 mini burger, which is unfathomable for myself). While the service left a lot to desire whether it was in its efficiency for its urgency to have us out before the next party arrived and the server’s unattentiveness and rather leaning on rude service, the food here was pretty delicious. Its not someplace that I’d go back to per se as the overall experience wasn’t quite on par to some of the other restaurants we’ve discovered through MTL a Table this year and in previous years.

Thanks so much to my awesome friend Starry Traveler who told me about this event and rounded up her family for a hangout and discovering food.  They are still one of the best foodie events companions.

We’ve been to MTL a Table two times together and now we’re venturing to check out this new event at Quartier Dix30.  There was about 10 restaurants to choose from in this complex.  Its a pretty scattered district.

Houston is right at the intersection of the busy area so you can’t miss it. I love bar and grill restaurants.  Houston does have a pretty classy atmosphere and the decor is mostly smooth unless you are facing the red tinted transparent panels which my husband was, and he thought it was a pretty aggressive choice of color and decor.

The four of us managed to cover the menu pretty much and try the three menus at each of their prices.  Starters and desserts are the same for each meal so I’ll only put the price tag next to the main dish so you can get an idea. 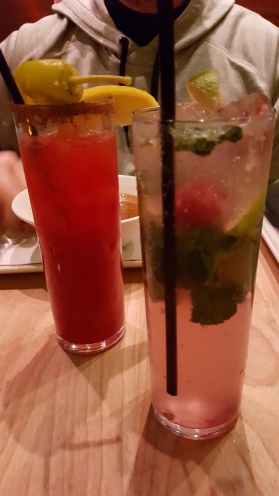 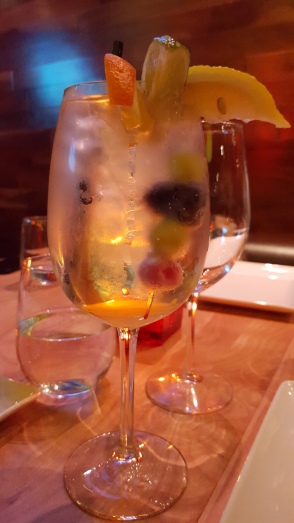 Starter: Soup of the Day
(no one took the salad) 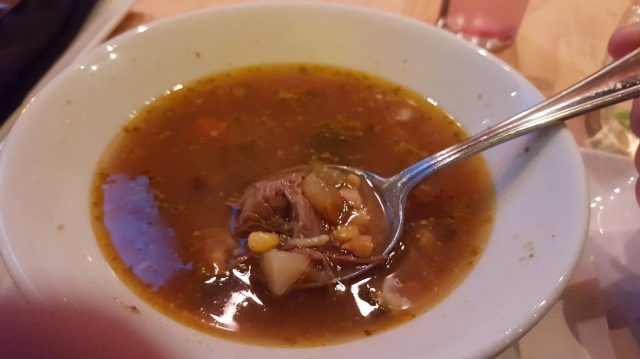 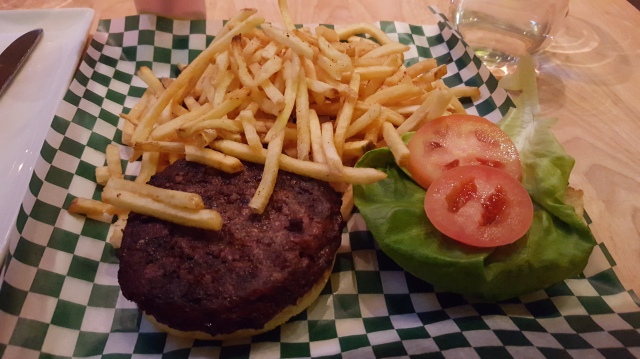 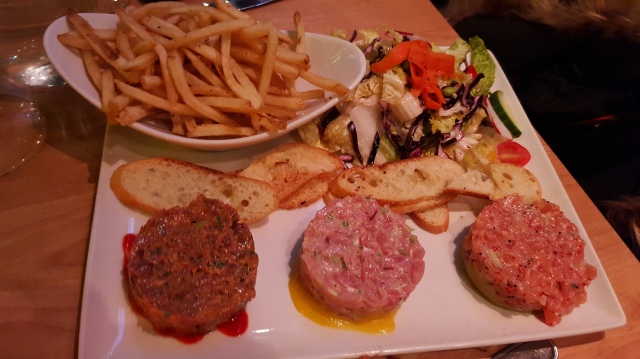 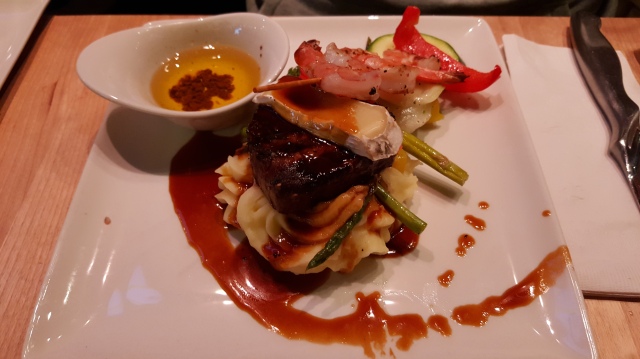 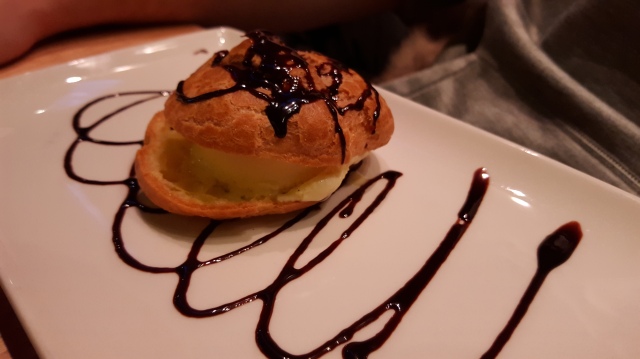 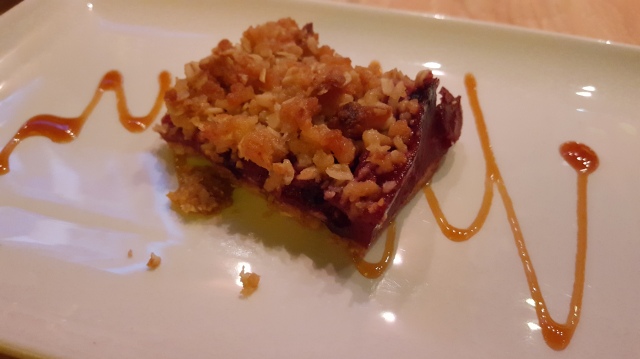 Overall…it isn’t the first time that I’ve been to Houston and its well-ranged diverse menu options for this event was what intrigued me.  Houston makes some rather decent drinks, depending on the choice. The Raspberry Mojito is pretty good and I believe my husband liked the Bloody Caesar (but then he usually does). Another thing that made this meal really great was the fact that on some really great timing, the soup of the day was beef and vegetables and not some creamy soup.  It was really good.  There was some spice in there that I couldn’t figure out but gave it such a delightful taste. Plus, soup on a cold day is so much more enjoyable. As for the main course, I had the burger and it was good.  I’m not a burger fan but the filet mignon was really great and the one worry was that the foie gras mayonnaise would be too much and it wasn’t. My husband had the Surf ‘N Turf and he really liked it.  The brie cheese worked well with the filet mignon and the shrimps were done really good.

Going on to the desserts, they were able to accommodate my allergies and let me choose from two lactose-free options and I decided on the Wild Berries Crumble. I have to say that it was a little on the sweet side and it was probably because of the maple syrup drizzled over it. Apparently, the profiteroles with the ice cream instead of whipped cream was a really nice twist and everyone seemed to enjoy it quite a bit.

Houston is a good place to eat.  Its never exactly my first choice but on events like this, trying these new dishes really gave it a nice little twist and an opportunity to give something more unique a try.  It was a decent experience!