I feel a bit conned at this current moment by this movie.  The DVD cover said Guillermo Del Toro presents so I thought he was the director.  Obviously, I learned that I should read the box because he’s just the writer.  However, I do admire Del Toro quite a bit so I picked up this DVD from the bargain bin.  Don’t Be Afraid of the Dark seems to have a decent cast at the very least, which is something I don’t often encounter much in horror movies.  Let’s check it out!

Sally (Bailee Madison) is given by her mother to her father, Alex (Guy Pearce) and taken to a 19th century mansion owned many years ago by a famous artist Emerson Blackwood (Garry McDonald) who happens to have disappeared and that he’s restoring with his girlfriend Kim (Katie Holmes) to resell.  As she tries to deal with the new family situation, she discovers a hidden basement of the house and starts hearing voices calling out to her to be her friend and to go play with them.  Eventually, she realizes that these hidden creatures are the reason of the mysterious disappearance of Blackwood and that they are now trying to take her away also. 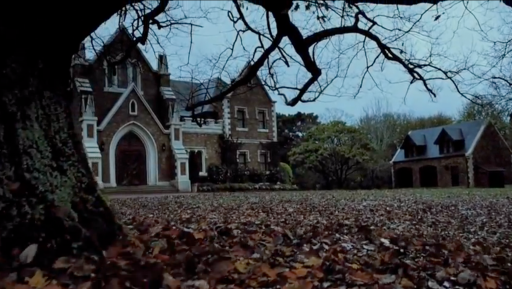 Don’t Afraid of the Dark has many elements that are similar to Pan’s Labyrinth (one of my all time faves).  Apparently this is a remake but with certain characters swapped around, I can’t make a comparison as I’ve never heard of it before.  So, why do I say its similar? One, our main character is a young girl, and only that but she also moves into a big creepy mansion with another significant other of a parent.  Two, they also have hidden areas, labyrinth like and gardens,etc. You get the idea, right? Three, there are strange creatures around that want something from her and try to manipulate her.

Am I saying the similarities are a bad thing? Not necessarily.  The movie is shot quite well, with a few parts that made me laugh quietly.  It slowly builds the mood.  The movie takes place pretty much in one sole location being the mansion that is being restored and it has this eerie and creepy atmosphere, especially in the dim scenes.  Of course, it also has a magical luring effect especially when entering the source of where the creatures hide out. 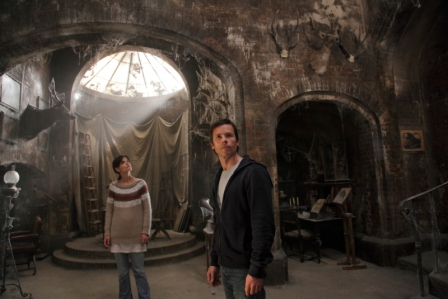 The characters themselves aren’t all bad. I have a feeling its the script and not the actors themselves that are causing their roles to be irritating and annoying.  Guy Pearce was this ridiculous overly realistic father that I wanted to punch him in the face at certain parts.  Don’t get me wrong, I’m a huge fan of him.  I mean how can I not be after Memento (another one of my all time faves).  And they all make these stupid decisions which lead to bad consequences of course.  Bailee Madison who plays our lead here, as young Sally, is pretty good.  I mean, her character is a bit frustrating also because she does dumb things also.  The creatures are all her fault and then she doesn’t really do much to stop whatever is happening until the end when Katie Holmes’ character Kim, somewhat helps her out (in a way).  I actually was impressed with the creatures.  As much as they were in the dark a lot, when they did show up, it wasn’t wimpy stupid creatures, it actually was done really well.  I actually wouldn’t expect any less with Guillermo Del Torro attached to this.

Don’t Be Afraid of the Dark is not completely a horror as its more creepy thriller.  I did tell you, I’d be going into thrillers now, right? Its a good change in pace. The story was fairly good, and I enjoyed this one a fair amount.  Its not Pan’s Labyrinth of course but I guess, if you have seen the original, maybe you’d feel different.  I wouldn’t know because I don’t have the comparison.  The character’s and their scripts are a bit fluky to me but its not the fault of the cast themselves.  Impressive creatures and a good atmosphere really brings this movie into the good horror thriller area.  I’d say that its worth your time to check it out :).

Did you like Don’t Be Afraid of the Dark? Have you seen the original? Are you a fan of Guillermo Del Toro?