Stênio works the night shift at a morgue in a very large, very violent city. On the job, he sees cadavers in every conceivable state, often the victims of horrific gang warfare. While most would be rather unsettled by it all, Stênio is not. For the dead speak to him. Not in any metaphorical sense but in a very literal way. Stênio was born with an occult gift and while not everyone would be at ease conversing with mutilated cadavers on slabs, he has learned that there are endless secrets that can be gleaned this way. Related to crime. To prosperity. One day he learns a terrible secret about people in his own life. He commits the sin of acting on knowledge obtained from the dead, cursing himself and those dearest to him in the process. – Fantasia Festival

Talking to the dead and messing with the paranormal is not exactly a novel idea. However, The Nightshifter takes its audience to the Brazil landscape where the audience gets to see the society and the unrest. The opening scene with police radios and societal unrest in a city filled with violence and crime makes it quite an effective way to make it feel immersive as it leads to a victim being taken to the morgue where Stenio (Daniel de Oliveira), the main character of The Nightshifter appeared. Based on a short story, The Nightshifter highlights some Brazil society issues from its patriarchy and the male arrogance to the bigger picture of violence and crime in the big city.

The Nightshifter shows a lot of great qualities from the immersive sound design that created both atmosphere and accentuated the jump scare moments. The deliberate loud noises and creep albeit at times, cliche sounds effects (like doors creaking open or slamming shut, to mysterious knocks) all were timed and merged well with the atmosphere to make it feel much more effective. It is all about executing it at the right time and for the most part, The Nightshifter lives up to the task. However, a part of this also was its downfalls as the middle had some dragged out moments which felt a little bit of the same with still effective jumpscares but felt like going through the motions of a horror film but not adding substance to the story, making the scares a little more predictable. Perhaps, it is the middle act’s pacing that needed to be better improved. 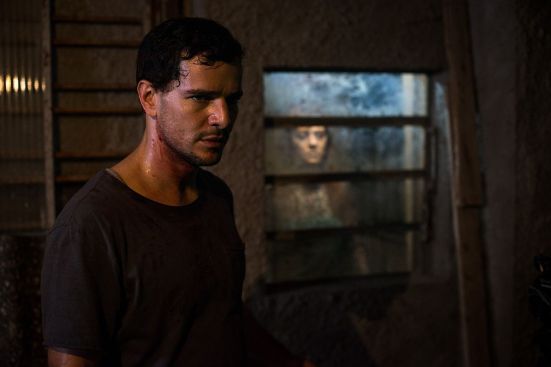 Aside from those little moments, this Brazilian horror film is quite the indie gem. It knows how to escalate the story in a charming way. Visually, there are some skilled shots. At the first half, it relied heavily on the gruesome work at the morgue. In the second half, it relied more on the lighting and scene set-up for creating atmosphere.There was guts and gore all over the scene with close-ups and overhead shots. The cinematography and lighting create depth for the scene from watching Stenio in his bloody job. At the same time, the odd choice of using CGI effects for the dead when they are talking makes for a rather goofy and strange feeling that oddly adds some dark humor in the beginning that eventually build to become some rather bone-chilling transformations by the end. It is something like this that best show the example of how the story itself also escalates bit by bit as Stenio’s life and his decisions start off in an easygoing day of conversation with the dead until he learns a secret from his own personal life that causes him to use a knowledge from the dead and act upon it with some horrifying consequences. The best part is that these consequences also build as the haunting moments start light and build to an intense final act. The final act’s effectiveness does rely on its audience attention to detail while boasting some great acting throughout to get to that powerful final act by Bianca Comparato (the leading actress from Netflix Original TV series 3%) as Lara, Fabiula Nascimento as Odete as well as Daniel de Oliveira as Stenio.

From the sound design to the cinematography and general execution, even if there were some slight pacing issues in the middle act, this long-awaited debut feature film from seasoned director Dennison Ramalho with many short films like Ninjas and a segment in The ABC of Deaths 2 shows his eye for detail and imagination. There are genuinely bone-chilling creepy moments in The Nightshifter. As a final note, The Nightshifter could be leading to a future TV series, so the ending scripted might be a head-scratcher for some but it opens up the possibility for future plans. It takes away a little from the self-contained element initially but taking away this knowledge, it does still make sense. Despite the small missteps here and there, it is a worthy foreign film to check out.

This review is also found on That Moment In.