Diana Bishop, historian and witch, accesses Ashmole 782 and knows she must solve its mysteries. She is offered help by the enigmatic Matthew Clairmont, but he’s a vampire and witches should never trust vampires. – IMDB

A Discovery of Witches is a fun little gem. Season 1 is neatly packed at 8 episodes and stars the talented but rather underrated (in my opinion) Matthew Goode (I mean, have you seen him in Stoker?) and the very charming Teresa Palmer as they are paired up as two magical individuals, vampire and witch who unexpectedly and much against the magical order’s rules, fall in love with each other, except maybe its not that surprising with later discoveries.

Granted its only a few episodes long for the first season, the story does have some odd execution issues that probably lean more on building a romantic foundation between the two characters a lot in the first half before bringing in the magical dangers in the second half. This execution is good and bad. Its good because the characters of Matthew and Diana become quite the connected couple and we can root for them together. The bad is that, it takes a little away from the thrills of this world of magic and keeps that part relatively more shallow and piles it on a lot more in the second half. I haven’t read the source material so maybe that is also how the book is.

While I say that, Matthew Goode and Teresa Palmer are amazing as a couple and probably will end up on couples to ship together for sure. Their characters Matthew and Diana are fascinating together even when some of the dialogue is very been there done that and maybe even a tad cringey however somehow whenever ancient vampires come into play, it all becomes a little more acceptable because they are expected to be old-fashioned. The connection they have is great on screen and they have some believable chemistry and passion between them. It also helps that Diana learns from him as he learns and protects her from the magical world that she isn’t quite familiar with. At the same time, they balance out because while she lacks control in her powers, she is also a tough character with determination not only for their love but other elements as well. TV couples that somewhat grow and better themselves together make for strong characters.

Where this season and possibly the story itself has its limits is in some relatively annoying characters who almost seem endless and have no sense of danger to them. Like the girl above playing Satu (Malin Buska) who honestly is supposed to be scary or unsettling through the constant character design of quiet and glares. Her character felt quite useless throughout although how they end the season 1 (and depending on what Season 2 does with it) might change that thought. While there are other fairly disposable characters here presented, which probably only feels that way because the season is so compact and has a good number of characters revealed but never quite having enough place to be memorable or meaningful.

This first season of A Discovery of Witches is honestly setting up a lot of foundations and giving an outline of the characters and the world and magical politics, that set the stage for whats to come in future seasons. Many shows tend to do that as something of an introductory. Luckily, there’s enough here to have Season 2 greenlit and hopefully will be released soon.

Its a new week and we are right on schedule with the second featured franchise, Evil Dead. I only know of this franchise and not much else so Evil Dead is completely new to me from start to finish. The only thing I might know a little bit of is the main dude is an iconic character. See, vague as heck in my mind but its okay, that is why these featured franchises end up here, right? I need to discover what all the hype is about! 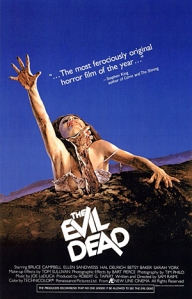 Five friends travel to a cabin in the woods, where they unknowingly release flesh-possessing demons.-IMDB

I’m going to be downright honest right here and not even bother to sugarcoat it. A lot of you might disagree with me or just think I’m crazy but I did not like Evil Dead. I’ll explain it and I’ll even tell you what I think works, particularly referring to the premise and designing the set with a seemingly low budget (because 80s movies tend to be in that situation). Evil Dead is kind of like the model of cabin in the woods movies and the characters themselves seem to be exactly what it is about. Maybe it is what started the whole trend. The atmosphere and the design, despite its low budget and campy and dated effects, all work well enough. I know what I’m in for when I start up a 80s movie so I don’t criticize it on that. I even took a few days to settle my thoughts a little on this one before doing the write-up.

Evil Dead has some pretty poor characters and it is paired up with the really slow pace movie that took forever to take off just didn’t work for me. Let us put the slow pace aspect aside because when it does pick up, there are some incredibly effective getting under your skin creeps, particularly when the possession starts and things start getting serious. After thinking about it a little more, the main issue of Evil Dead is that for what it accomplishes in reality, it takes itself a little too seriously. Its a shame because it sets up quite the mood right from the beginning as they build up the tension of getting into the house and the camera making it always look like someone is observing them. Those parts are pretty impressive to watch even if the swinging chair is hitting the house and stops suddenly and we already know it would or sounds come out of the woods and we know that something is out there, for example.

What Evil Dead does most poorly is the characters. The first girl, Shelley heads outside with a sound she hears outside. Logically, who would do that? Just walk out into the woods which is in the middle of nowhere and not tell one other person in the house? Fast forward even to after the first possession happens and there is somewhat an idea that a danger has happened and they have heard the tapes and realize that body dismemberment is the only way to stop these attacks at least for a moment. The other characters aren’t quite the focus and we already know that because a lot of camera time is placed the so-called iconic character, Ash, played by Bruce Campbell. Ash is a frustrating character to no ends because he is somewhat of a sentimental fool who would be that perfect man you’d want to see in a romantic comedy but not in a life-threatening situation. He has a heart and that is fine. But after all that has happened, he can’t put his heart to stop the madness that has possessed his friends and that is pure ridiculousness. Perhaps, it gives his character some reality but it was hard to get behind his decisions that would inevitably stretch out the movie with yet another  horror sequence. 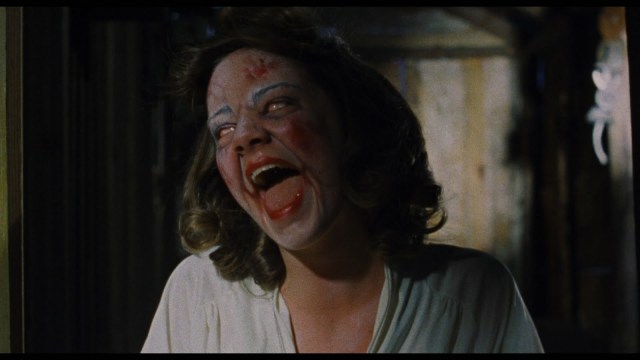 Talking about horror sequences, nothing quite beats the laughing lady which is incredibly annoying and creepy all at the same time. There is one scene that creates a lot of uneasiness and it also created a lot of frustration because Ash could not do what he should to stop it all and falls for the tricks of the demons, in a way, or just his sentimentality takes over him too much. Whatever it is, it was at that moment that I just had enough of the character and wanted him to stop. It also is the moment when I started to wonder what made him so iconic.

Overall, Evil Dead is effective in its own slow pace horror despite its campy and outdated effects. There are some good horror sequences that cause a great deal of uneasiness however, the characters here leaves much to be desired, especially that of Ash who makes me wonder what gave him enough to be the iconic character of this franchise. Hopefully, the sequel will answer that question and give him a much braver and more courageous character.

Have you seen Evil Dead?