We’re back with another unboxing! Losing one subscription means we’re just with the Arcade Block subscription for this and September.  I’m working on getting another subscription after that so it’ll be back to eventful unboxing 🙂

August had a ton of email reveals from the team at Nerd Block telling us about all the games that the gear would feature.  It had me all hyped up! When it finally arrived on Friday, my fiance and I sat down to do the unboxing on Saturday morning!

Anyone has an idea what Boston Vault Dwellers are? We both didn’t.  Its supposed to be “the best damn team in the post-apocalyptic league”.  I need to research that a little.  Sounds fun 😉

I’m a huge MGS fan! We got the magazine and started discussing whether we had missed one of the newer games. Suffice to say, we’ve kind of fallen a little behind in the last year or two with our lives being literally moved into a new place and our schedule having a little flip around.  But things are settling in and we’re making time to do more gaming here and there.  Maybe we’ll pull out MGS and give it a go! 🙂

I can’t wait to read this magazine! It went right away to our night table! 🙂 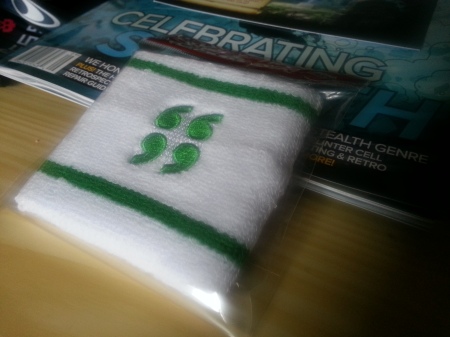 The fiance already snatched this up for playing Gran Turismo Racing.  Apparently that makes him sweat.  Well, that’s because I never understood such a strategic racing game.  Haha! But, to be super honest, playing video games taught me about counter-steering and that is super useful during winter on snowy days. Man, I want to play some Need for Speed…

We haven’t gotten into the Mortal Kombat X. We don’t own either of the consoles it was released on.  Its a work in progress to save funds for it.  Regardless, Sub-Zero is pretty iconic.  I did play Mortal Kombat when I was young with my cousin.  That is what happens when you grow up with only one cousin near your age and is a guy. Haha! But, it was fun.  I never realized how brutal it was until I saw those gameplay videos of Mortal Kombat X.  Has it always been that brutal especially those finishing moves?

I’ve already shared my love for these soundtracks that pop up in the Arcade Block.  I loved the instrumental one a few months back.  I’m not too sure about the past one but this one sounds pretty good.  Its from “chiptunes rockers” Anamanaguchi.  I’ve never heard of them but if they are mixing old school with rock successfully as the info card says that I’m down 🙂

Notice the funny details? Its not clear but you should still catch it.

These shirt from ShirtPunch are seriously so awesome.  The way they mix it up so clever and brilliant.  Seriously, can you see what they messed with? I noticed it right away and was like, wait, isn’t that supposed to be….” Can you see it?

We got an announcement of a game one of the gear will be based on. 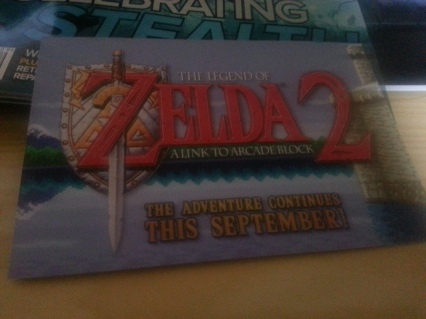 I know a few of you will be interested in seeing what its going to be.  I have yet to enter the world of Hyrule and Zelda and all that awesomeness I hear so much about 🙂

That’s it for August Arcade Block!
Did you like it? What appealed to you most?