I took last week to catch up with a few priorities like Gone Girl and reblog and neglected post and well, Thanksgiving (which is actually today but I already celebrated yesterday).  Now, I welcome you back to the Halloween Marathon and lets get right into business (because I am now behind) and check out Friday the 13th The Final Chapter.  Supposedly this franchise was going to end with this one from what my boyfriend told me and I guess I can’t really argue with that because of how they wrap things up.  We all know it didn’t or else this marathon wouldn’t be happening. 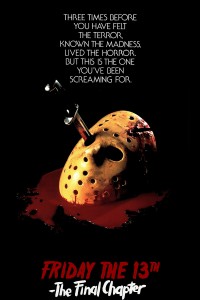 After being mortally wounded and taken to the morgue, murderer Jason Voorhees spontaneously revives and embarks on a killing spree as he makes his way back to his home at Camp Crystal Lake.-IMDB

This killing spree involves not one but two houses along his way home.  One housing a group of teens (of course) and another is a family. 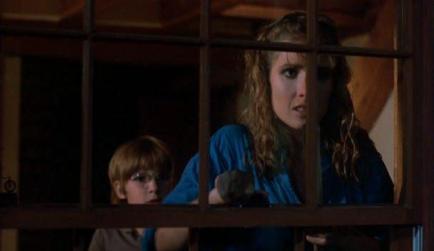 The change in location and number of targets is what makes this Friday the 13th jump back into good territory.  It was really fun to see the slashing action swap around.  Plus, it took the audience on a little Michael Myers adventure of how Jason Voorhees is equally unkillable because after the ending of Part 3, he still managed to come back and this time, he was engineered to go back to his home on Camp Crystal Lake and he was ready to kill whoever got in his way. 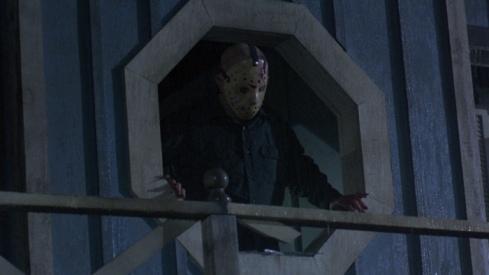 Jason Voorhees is a pretty menacing character in this one.  He really does get pretty creepy and his killing methods although still varies for his characters, and it seems the director liked a lot of face crushing, he still brought a lot.  Plus, this time the equation brought in a family consisting of a mom, daughter and a younger boy. When you bring young kids in, there’s always a question of whether they will be really annoying and Tommy Jarvis played by Corey Feldman, brought a lot to the final act, especially since he was actually quite clever.

Finally, the tone of this one varies a little and that scene up there is cheesy and so hilarious.  There something about this one that is a little different from the rest.  It has a little humor, a few scares and adds a few extra elements because its not out in Camp Crystal Lake.  Jason still keeps the alive factor that he has where he does a few chases and he has a few brutal kills (that was actually pretty disgusting).

Although, none of Friday the 13ths are great movie masterpieces in any way, they do always promise some form of fun.  So far, I’d have to say that the first one was the most dull to watch.  This one is pretty entertaining 🙂 We all know it doesn’t end with this one, so obviously, our journey into the Friday the 13th series continues.  These are feeling a little formulaic though and when I’m looking for pictures, I get confused which character belongs to which one.

The Goonies is one of those movies that my boyfriend keeps talking about but every time we walk past it in the bargain bin, we don’t pick it up and get something else instead (usually not so much of a bargain as this).  Finally, a week or two ago, my boyfriend really wanted to get it. If not, this review would never have happened! Its my first time seeing The Goonies, maybe you’re thinking what other awesome movies I’ve missed…The answer to that is probably lots 😉 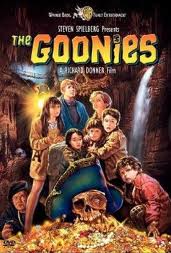 On the eve that brothers Mikey (Sean Astin) and Brand (Josh Brolin) are forced to leave their homes along with a group of their friends in their neighborhood due to developers taking over the land to build a golf course, they find a treasure map in their attic.  This treasure map allows Mikey to recall a story that his father once told him before when he was a child about One-Eyed Willy and his treasure on a hidden pirate ship.  This makes him convince his friends, also called The Goonies, to go find this treasure in hopes of finding enough money so they can stay together.  In search for his brother, Brand and eventually two of his friends Andy (Kerri Green) and Stef (Martha Plimpton) end up joining into this adventure.  The entrance of the treasure hunt ends up being in the home of the wanted criminals the Fratellis: Mama Fratelli (Anne Ramsey) and her two accomplices along with a locked up Sloth (John Matuszak). Will the talents of The Goonies, Data (Ke Huy Quan) and his booby traps, Mouth (Corey Feldman) and his mouth and a few others like Chunk (Jeff Cohen) and Mikey himself and his brother and friends be enough to find the treasure and save their home? 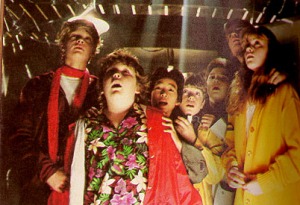 You know what this movie reminded me of? Indiana Jones! It was Indiana Jones for kids.  I love Indiana Jones adventure so I easily fell in love with this movie. Sure, there are a few parts that maybe aren’t really good because they are predictable but its like walking into being a kid anymore.  Granted, my childhood was never so fun and I didn’t do hangouts with groups of friends.  This one really drew me in with the play with words, the booby traps, the lucky escapes, and just trying everything to stay with our friends and enjoy the moments with them. 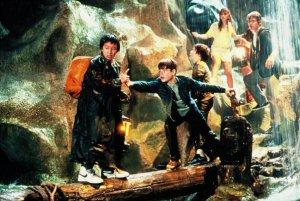 I’m not going to go into the cheesy effects much but as much as I’d like to say that it retracted from the movie, it probably added even more.  There was nothing fancy about this but for example, my boyfriend and I laughed at the bats.  They were ridiculous and no one would be even afraid of them if thats what bats actually looked like, but it provided us with lots of entertainment.

The Goonies themselves each were loveable in their own way.  They each brought something to the hunt itself whether it was courage, luck, brains, booby traps or just being extra eyes or strength. It gave them all a nice balance in the group and for a bunch of young actors, they did a great job.  What enforced that feeling of Indiana Jones is Data/Ke Huy Quan since he was in one of those movies too and I LOVED his role 🙂 The Goonies just made the audience want them to succeed because it felt like we were every part in this adventure also.  They all had characters that grew on us and made us laugh with some of their silliness. 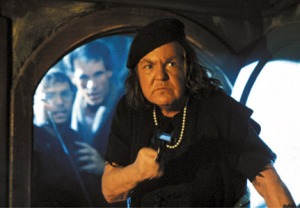 In any child’s flicks, they have to have some form of moronic villains and the Fratelli’s took the prize at it.  Mama Fratelli lead her two sons to chase after the Goonies after hearing about the treasure.  As much as Mama Fratelli feels like the most evil of villains, her sons are easily tricked and even though grown up were kids also because they would also fight and want to right. (Rhyming was not intentional).  As much as this movie wasn’t extremely intense, they proved to be the comic relief.

I regret not swiping this up from that bargain bin the first moment I saw it.  It shines as an children’s adventure flick.  It embodies what children would dream about and the adventures they could have.  It also brings in lots of messages about appearances and values.  Not to mention its just purely fun and entertaining! I’m guessing I’m one of the few people who haven’t seen this, but I’d like to say that I highly recommend it 🙂