After some research, Dark Before Dawn  is a YouTube series and this little part shown at Toronto After Dark is episode 10 called Convoy. Convoy is a little segment which tells the story of some men carrying previous cargo when they are infiltrated by some other men and end up fighting for their lives. You can watch the episodes HERE.

Looking really good right from the start, this episode of Dark Before Dawn as a start-off episode looks really intriguing and definitely sparks an urge to check out what came before to see whether it will reveal why the cargo itself is precious and whether its just a bunch of different people in the same (what would look like) post-apocalyptic world. The action itself is great and the whole tone works well. Its straightforward as small segments like these should be. Its just a lot of action and works for its context. There is some blood going on here and it all looks good and nothing low budget, which is always a plus. Definitely looking forward to check out the rest of the series and see what is in store for it, especially how the Dark Before Dawn element works in the series and story as a whole. 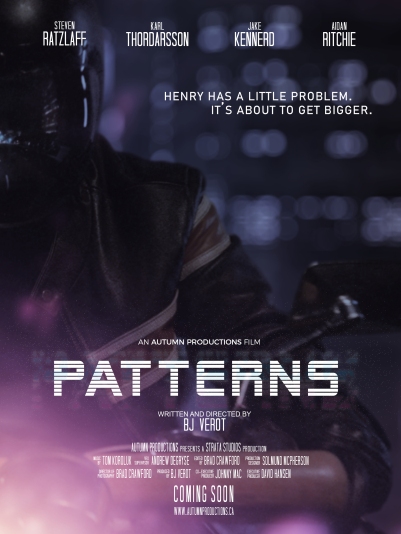 Patterns tells the story of an older man Henry who goes to a facility to get a treatment procedure and ends up being set on a path of killing after he receives a phone call.

Patterns has a fragmented storyline that jumps back and forth from the past where Henry goes to get his treatment and the happenings there to the trigger that leads him down the path. Its mostly an action piece and fairly mysterious as to what this whole procedure he goes to does to him as he ends up joining their “program” which makes him susceptible to number sequences on the phone which repeat itself in his mind over and over again. While the elements here from Henry to the doctor to even the Cleaner all are great pieces to the puzzle, the acting might be the only iffy bit here that seems like everyone seems to be trying too hard to make the film more suspenseful or that they have more to them instead of it being as natural as it should be.

There’s a lot of questions that leave unanswered but that does show a potential of this concept having a further area to explore if ever it was considered as a bigger piece and gives it some depth, always a good thing.

The Changeling is a 5 minute short about a woman who comes home after a panicked call from her babysitter and frantically goes in to look for her baby daughter to find a demon looking after her instead.

There’s a lot of good elements here. The background score works well with building up the atmosphere here. There are a few jumpscares here and there however do work well enough except doors banging shut which because of its overuse in horror films in general don’t quite work as effectively. The demon itself is done really well. The acting is on point as well. The progression of events also is well-paced to give this one some tension. The Changeling isn’t exactly a new concept which probably other than the two feature films being done before and remade before, there’s a lot more but for a short, this one is well-polished and looks great and well-rounded on all the elements. An impressive short for sure!