Next letter is V! I love it when things go my way! I had wanted to add Veronica Mars (the movie) to wrap it up this month and I just couldn’t figure out where to put it, then one day last week, it just got added to Netflix. Its rare I’m so lucky but man, I’m excited. Veronica Mars ended the series in this middle of nowhere situation and I just couldn’t handle being left stranded wondering.  I can’t wait to see Veronica Mars and the crew even after 9 or 10 years or whatever.  I mean, to me the series ended like a few months ago. 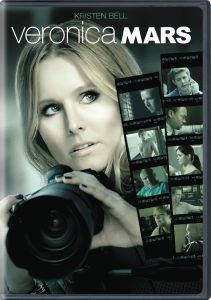 Years after walking away from her past as a teenage private eye, Veronica Mars gets pulled back to her hometown – just in time for her high school reunion – in order to help her old flame Logan Echolls, who’s embroiled in a murder mystery. –IMDB

The BEST way to wrap up this Veronica Mars business.  I mean, if they had a sequel, I’d be down for it.  Seeing as it was for fans, made by fans, it definitely helps.  There are so many little things that pay tribute to parts of the series.  Veronica Mars is still has her attitude.  She hesitates on whether she wants to get too involved in her past again but just the act of coming back shows that she is still has loyal as ever to her friends.  She is in fact a marshmallow.

The mystery itself was legitimately good.  It reminisced on what the cases used to be like and it involved the crowd.  The best part is that a lot of the same roles were retained by the same cast from the series, save for a few smaller characters that honestly, I didn’t even remember until I searched them up.  Other than that, they skillfully replaced the new faces with new roles and identities.  All that brings back a sense of continuity.  I wish more of my cancelled favorite shows had the following to make something like this to give it a more rounded ending.

What was great was that it emphasized on the few aspects that was important to the show (at least to me).

Reunion time is around the corner.  Wallace and Mac are both in solid careers with links to past relationships.  Its had to escape the rich folks of the 09ers elites and whatnot, right? Still, the sarcastic humor and little comebacks work so well together.  They are a silly bunch together and its just such a feel-good moment whenever they are together.  Plus, these friends know Veronica even after being apart for so long. Regardless of the situation, they still help her out. 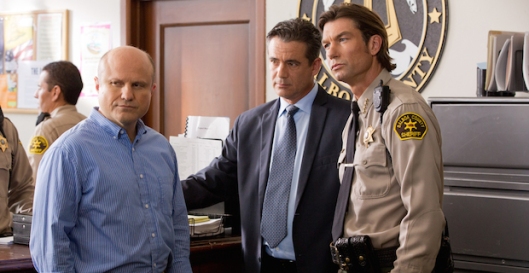 Nothing quite makes up for the fun relationship that Veronica has with her dad.  I love Enrico Colantoni.  I love him a lot in Flashpoint and as Veronica’s dad, the chemistry is different.  While they are really open and talk about many different things, he always looks out for her.  However, no matter what does happen, he still has thoughts that differ from Veronica’s.  He knows whats good for her and actually this time, Veronica knows what good for her.  She just doesn’t necessarily know how to pull her out of certain situations and maybe the thrill of the chase isn’t quite over for her.

Third: (and the BEST aspect) LoVe

You know what? I like a lot of on-screen ships and this one rings out chemistry the absolute most.  I love Jason Dohring.  Logan has the most growth in this.  He’s caught up in yet another mess. Veronica’s here to help again. But he’s changed.  He fights for the country now and is a lieutenant. He still has the same sort of drab sense of humor that he carries with him.  And he always picks the wrong girl but how can anyone be right when we know that while he’s a little dark and attracts all sorts of crazy to his life, that he is the perfect match for Veronica.  The chemistry was built so well here.  They seemed strange at first but then we saw the looks and glances.  I just love them! SO MUCH! 🙂

*takes a deep breath* Excuse my fangirl moment… I’m back to normal.

Point is, Veronica Mars stories have a little twist to them all the time but they are also a little predictable.  What I loved the most about Veronica Mars was her character and all the other characters, the chemistry and the attitude balanced each other well.  It just works good together.  This movie did exactly that.  At the same time, it paid tribute to the movie that if you are a fan of the series, you’d notice those little things. And if you’ve seen this, that last scene with Logan and Veronica got me right away.  I fell in love with them all over again. So yeah, I like Veronica Mars and went on to play it a few more times instead of writing NaNoWriMo or drafting blogs. That’s all I’m going to say.  I’ve tucked it away for a bit but I’ll take it back out again to watch it again. The ending makes a statement of Neptune and everyone involved that I do quite enjoy.

Are you fan of Veronica Mars? What did you think of the movie?

With that, Veronica Mars comes to an end. I can’t believe that it only had 3 seasons.  Its a little sad because she’s a really awesome character and the characters (and cast) involved in this was really great also. In Season 3, there’s a few new characters as she steps in Herst College and the college itself has a few little cases that pop up which she is trying to trace.

Veronica, Logan, Mac and Wallace, (even Dick) head to Herst College.  Right off the bat, they are encountered with a “date” rape case that has been happening on campus.  A group of ladies believe its the sorority boys and their doings but when it hits a little too close to home with Mac’s roommate, she digs a little deeper to try and find out who is the true culprit.  While this is happening, the Dean also causes another case to pop up involving her criminology teacher.  What’s more, she gets recommended to join in in a FBI intern program.  At the same time, Logan and her relationships hits a few snags as they deal with Dick following the death of his brother.  As well as the addition of Wallace’s roommate Piz who is crazy about Veronica but too shy to do anything about it.

I think that covers a good bit of the storyline up there. We have a little triangle, kind of, that doesn’t exactly happen because Piz is too shy to do anything and Veronica and Logan are too attached to realize when they should break it off. The main focus goes to the two big cases here which leads to a few smaller ones but those ones take up the majority of the season and are resolved a few episodes before the end.  I can only hope that they had wanted to build it so that there would be a season 4 which didn’t happen.  I wasn’t following the show back then so I have no idea what the intentions were.

Still, Veronica Mars grows in this season.  She starts looking at the possibility of her future.  She tries to be more trusting but failing, expecting more from Logan which she realizes is not exactly possible, and starts seeing sometimes that her actions have consequences that linger. She becomes a college student and realizes that college is almost like high school. At the same time, she understands what loving someone and being in a relationship is although not exactly knowing when to pull herself out of dangerous situations.  But she also starts building stronger friendships, especially with Mac, especially while she tries to get over Beaver’s death from the previous season. Mac is a pretty smart character also so its nice that she’s getting more time for her story arc.

If the end was expected in advance for Veronica Mars, they did do a good job of coming full circle to putting Veronica back into a situation similar to what happened to her before. It causes her to act the way she would except it ends with her making a more grown up realization of vengeance. At the same time, you can see the trust.  On a final note with a bit of spoiler, I am a huge Logan and Veronica fan because Jason Dohring in all his bad boy glamour is really protective and acts on his feelings.  But you have to admit that Piz kind of does win my heart over because he’s the good guy, the right choice and what is good for Veronica.  He can allow her to trust him in even the most suspicious situations but also turn her into a girl (Veronica’s words).  Its a refreshing take on how he changes her a little even if we only have a few episodes to see this interaction. Piz, played by Chris Lowell, always has that boy next door charm.

With that said, Veronica Mars Season 3 has a decent ending.  It does keep some open-ended questions for your own mind to decipher but Veronica Mars has grown up and we can see that she is a better person after seeing her in the three seasons.  I don’t think Veronica Mars should have ended where it did because its a genius character and the snark and witty humor in this is tons of fun but well, I guess all I have now is to get some answers in the movie. You should be seeing that review soon 😉