I finally made it to see my first movie of the film festival.  I am organizing my time to see a few more as I start feeling better gradually 🙂  Although I did miss the one that I anticipated the most, I did end up finding a few that I missed the first time I was looking at the whole list of movies.  Last night, I went to see the historical crime thriller The Last Tycoon! Let’s check it out!

Cheng Daqi (Chow Yun-Fat)  is one of the biggest mob bosses in Shanghai in 1937.  From the time when he was just a poor boy (young Daqi by Xiaoming Huang) working at a fruit stall at the countryside, he rises up after seeking refuge in Shanghai from being framed for killing his boss and afterwards being saved by a secret service soldier Mao Zai (Francis Ng), who also teaches him how to kill.  In Shanghai, he uses his guts and courage to move up in the underworld mobs and eventually is taken as an apprentice under Mr. Hong (Sammo Hung), one of the biggest gangsters in the early 1900s who is also a police captain.  As he uses his quick thinking to help his master and then saves him from the new General, he rises up to be Mr. Hong’s sworn brother and together they earn money and get involved into different types of businesses until 1937 when they are asked to help against the Japanese invasion by the secret service unit there.  At the same time, Daqi’s old flame ends up in Shanghai with her husband who also has a secret agenda.  Daqi now has to worry not only for himself and his family but also make the choice to save his country and also balance it between his old love.

Fantasia categorized this as a historical crime thriller.  I hold out on that a little mostly because I’m not completely sure if there is a historical factor to it.  For one, the invasion of the Japanese did in fact happen and I believe my mom told me that one of the characters there is based on a true historical character.  I still have to do a bit of research on it. Regardless, this was very much an action thriller packed with a whole lot of underlying political values and morals in both a coming of age as we watch how Cheng Daqi moves up to become one of the biggest mob bosses in the underworld of Shanghai and also the struggles to maintain a balance between making the right choices of becoming allied with the Japanese as they invade Shanghai (and China as a whole) or to use the power he had to conquer and defend. It was also a story of brotherhood and loyalty.

Chow Yun-Fat’s character was definitely refreshing.  Its been a while that he has been in an action thriller where we see him fully engaged in action to fight and shoot.  He is absolutely a great actor and in this flick, he leads it very well.  Even his younger self played by Xiaoming Huang, which I came to learn from my mom and is also in real life an actor that Chow Yun-Fat has taken under his wing to teach him better acting skills, was pretty impressive.  Cheng Daqi needed someone to reenacted by someone with the tough and calm charisma that Chow Yun-Fat can bring especially when faced with the scheming parties that surrounds him in this flick. He had so many good quotes also! This one was in the trailer:

I’ve never been afraid of anything in my life…except being a traitor. – Cheng Daqi (Chow Yun-Fat)

Another one they used in the Cantonese version final trailer:

I personally would want to rewatch it in Cantonese because thats the original language of the movie even though I saw this in Mandarin.

Sammo Hung had a smaller role in The Last Tycoon.  However, Francis Ng as Mao Zai who plays a controversial and pretty intense character who is a government commander who also has some secret service type of description behind it.  I’m a huge fan of the peculiar characters that Francis Ng chooses to act.  He always lives up to them and he brings exactly that, character. There’s always some new charisma that he can bring on screen and this one was no exception. 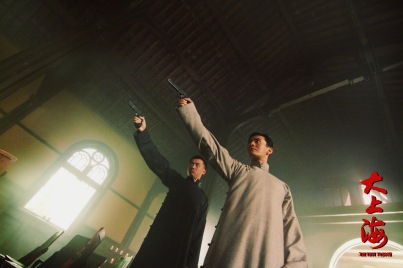 On the reigns of this movie, we have director Jing Wong.  I’ve reviewed a few movies by him before and he is one of my absolute favorites as he directed most of the Stephen Chow movies and this is the second movie he collaborates with Chow Yun-Fat after God of Gambler.  He makes this movie with a lot of style.  As we enter into Shanghai, we see the contrasts of lights and architecture and just the glamour of all the fame with the nightlife and the mobs underworld.  The setting is just so nice to look at.

Aside from that, we open with beautiful music that reminds of the era that its set in.  The soundtrack in general matches the scenes perfectly.  Whether its the songs that they chose during certain scenes or the background music that makes this movie feel majestic, courageous and maybe even a bit patriotic.

This probably won’t be the best Chinese action movie that I have seen but it does have an amazing style that director Jing Wong brings to it.  Chow Yun-Fat comes back with not only action but plays the role of Cheng Daqi in an outstanding way.  With him, Xiaoming Huang is an amazing young actor that portrays the guts and courage and desire to rise up from the younger Cheng Daqi.  Francis Ng brings in the intensity in the movie.  Its a pretty awesome movie in general and definitely worth a watch! 🙂

Moving along with the marathon, we arrive at the 3rd instalment of Pirates of the Caribbean with At World’s End.  If you haven’t read my reviews on the first two, you can check it out HERE and HERE! I saw this one in theatres with my mom in Hong Kong back in 2007 when I was in Asia for the entire summer.  Hong Kong had made its main promotion with Chow Yun-Fat‘s role as Sao Feng so my mom was interested as he was popular in her generation.

Dead Man’s Chest left us with a cliffhanger ending and this one picks up pretty much right after it.  Out comes Captain Barbossa (Geoffrey Rush) leading the crew along with Elizabeth Swann (Keira Knightley), Will Turner (Orlando Bloom) and Tia Dalma (Naomie Harris) in search of a new ship and help from Captain Sao Feng (Chow Yun-Fat), a ruthless Chinese pirate, in order to save Captain Jack Sparrow (each for their own reasons) from Davy Jones Locker. With the “song” being sung, Sao Feng and Barbossa has to find Jack Sparrow in order to have their meeting for the Brethren Court at Shipwreck Cove, and at the same time, not fall for another game of deceit/betrayal set up or manipulated by others controlled by East India Company and Lord Beckett (Tom Hollander) and as well as not fall prey to Davy Jones (Bill Nighy) and his Flying Dutchman.

At World’s End is somewhat hard to pinpoint as to whether I like it or not.  For one, the movie itself is very long and the plot keeps switching and switching from one betrayal, to another deceit to something else.  It seems like they wanted to wrap up the series desperately (but then they came out with On Stranger Tides which I will watch tonight probably). The plot becomes  a bit more serious with a few scenes of more dumbed down humor compared to before. Jack Sparrow’s appearance is kept to be the same craziness but it has less wit than before.  However, some characters did rise up to a better development. 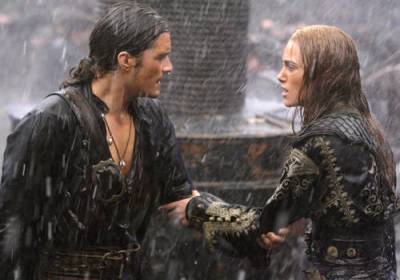 For one, Orlando Bloom is always charming but before, his goal was just always Elizabeth and Elizabeth and even more Elizabeth.  This time, he’s got a brain of his own and his own agenda.  This makes him have a totally and completely renewed (and attractive) vibe to his character making him the one I loved seeing on screen.  Then, we have this whole fresh vibe between him and Keira Knightley’s Elizabeth.  On that same note, Elizabeth Swann really developed as well. She now has to tough up and face her choices with how things ended in Dead Man’s Chest and how to deal with the events to come in this one.  Both of them was a joy to watch on screen 🙂 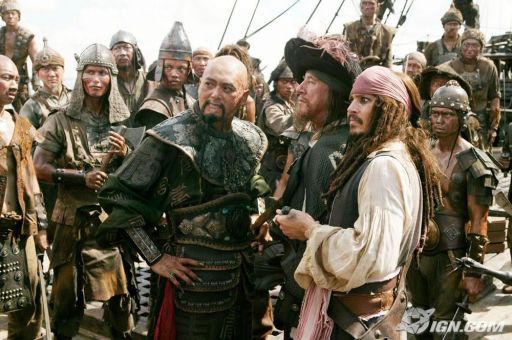 Now lets look at the other tidbits! Chow Yun-Fat wasn’t on screen a whole lot (so much for the Hong Kong promotion, my mom felt cheated).  He was alright though as he usually is. That little part didn’t make a whole lot of sense to me.  This movie had a lot of not very useful parts.  Maybe because the plot was all over the place and sometimes I wasn’t really sure where everything or anything was going.  On a side note, Davy Jones was still pretty awesome plus we saw more of Naomie Harris as Tia Dalma who is mysterious and dark so she adds a bit of darkness.  Hmm…and the whole thing was very CGI, good or bad depends on the person 😉 I found it fitting, fun, thrilling.

At World’s End is still quite a thrilling adventure to watch however, what makes it lose its steam a bit is the mass amount of plot with so many characters brought back or added in with more screen time.  What does help is that there are characters that develop and they bring on a different vibe to the whole story along with some darkness.  Overall, its a decent movie for the Pirates series.  I loved the first two and this one I occasionally watch as well, just because of the length I usually split it in various parts throughout the day or maybe two days. Not the best in the series but still enjoyable!