This Means War has been a movie I’ve been meaning to watch for a while.  I was always a little hesitant because of certain factors, mostly being that I never really liked Chris Pine in anything other than Star Trek and then its not really the type of guy I’m attracted to, so with this being a romantic action comedy, I wasn’t exactly too sure.  Either way, lets check it out! 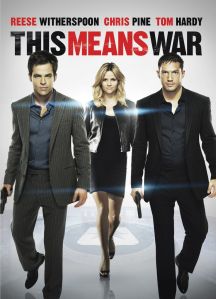 FDR (Chris Pine) and Tuck (Tom Hardy) are top CIA agents and good partners as well as best friends.  After an operative gone bad, they are pulled off the field for a while and Tuck decides to join an online dating site.  He ends up meeting the very attractive Lauren (Reese Witherspoon).  Afterwards, Lauren meets FDR spontaneously and he also is attracted to her.  When FDR and Tuck realize that they are pursuing the same girl, they decide to use their own measures to see who can get the girl first.

Like I mentioned before, this is a romantic action comedy.  I’m going to say that I didn’t hate the movie and for the most part it was pretty entertaining at a good many parts of the movie.  To be absolutely honest, this was a pretty average movie, story-wise at least.  Maybe its because it was a huge mumbo jumbo of stuff.  It tried to get a bit romantic but never really going there and then there was some action but then not really but then it was also supposed to be funny and I’m not exactly sure if I found it completely humorous.  I guess the sum of it all would be that it entertained me for the evening and I’ll probably forget most of it soon enough. 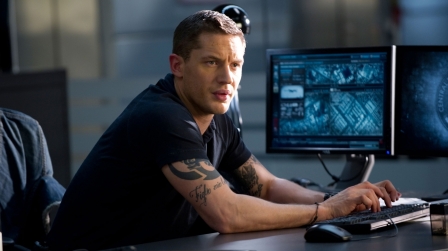 The most memorable character for me had to be Tuck played by the ever so handsome and charming Tom Hardy.  Like I said, I’m not into Chris Pine’s type of appearance or even the character he played.  He kind of reminded me of the annoying boy in high school math class that sat in front of me and I just wanted to slap the back of his head to shut up.  Sure, he was entertaining but when there wasn’t much connection to the characters themselves and their relationships, I was secretly rooting for Tom Hardy because I thought he was just so…awesome and attractive.  I have a thing for British accents…its just a trait I’m attracted to, what more can I say? Plus, his dialogue was just so much more sophisticated and romantic.  Its hard to really see him as Bane when I think about it… 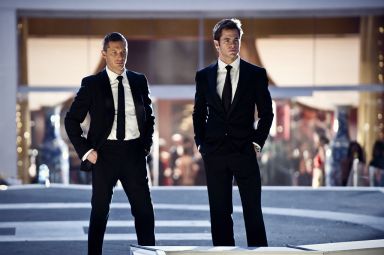 Tom Hardy was the highlight of this movie aside from the silly chasing and using their CIA resources to get the girl funny moments and some very cutesy Reese Witherspoon moments aside, the story was not too great.  I never get too picky with these things for romantic comedies though.  There just seemed like something was missing and I couldn’t really feel the connection to the romance going on.  I’m not going to comment on the visuals as my right eye still goes blurry once in a while so I’m not going to be a good judge of it 😉

With everything considered, This Means War is an average, possibly forgettable romantic action comedy.  Tom Hardy was my highlight and Reese Witherspoon had quite charming moments as well.  Chris Pine was good also, although I just never seem to connect with his character as much.  Even though there’s not much surprises to expect from the story, it was entertaining enough that if it does cross your path, you could sit back and enjoy it.  Its worth the one viewing 🙂