Jane Eyre is one of those classics that I recently read should be in your Top 10 reads that you shouldn’t miss in your lifetime (I read it recently somewhere).  It makes me so much happier to be on track with that.  Being a completely dedicated bookworm these days, its been fun to dive into different types of books.  I used to really dread reading classics when they were assigned in school but so far, it has really opened my eyes.  The Adventures of Sherlock Holmes was mysterious and had my mind working while Pride and Prejudice (before I did book reviews here) had me completely mesmerized with its writing.  I have determined myself a Jane Austen fan and I have so many more of her novels to read.  So since Jane Austen is an amazing author, I decided to venture into the world of the Bronte’s world.  I had started reading Wuthering Heights about 3 times and never finished so I was really hoping that Jane Eyre would be a whole lot easier, a different Bronte sister, a different style, right? And plus, with the movie Jane Eyre that I reviewed for Valentine’s, it was an extra motivation.

Jane Eyre is a girl who has been orphaned at a young age.  She was then taken into the care of her uncle, her father’s brother.  Her uncle treated her very well but when he passed away, he made his wife Mrs. Reed promise to take care of her.  Mrs. Reed however, did this reluctantly and found her a burden.  She would favor her children over Jane and after some incidents, she sent her at the age of ten to boarding school, outcasting her from her own family.  She ended up staying here and eventually when she was older and accomplished, she taught at the school until she found a job as a governess.  It was then that she set off to other independent endeavors in life to Thornfield Hall to be a governess for a little French girl called Adele.  At Thornfield Hall, she meets the rude and odd Mr. Rochester, the master of the house who is rarely there. Even though, Thornfield had its mysteries and eerie feeling due to unexpected noises and odd events that occur. Slowly, she found herself growing to enjoy Thornfield as her own home, her housekeeper Mrs. Fairfax as a elder companion, Adele as an obedient student and mostly, becoming attracted to the presence of Mr. Rochester.  Eventually, they grew to love each other passionately and on the day of they were to be wed, a dangerous secret is revealed and she has to make a choice for her future.

Jane Eyre is a charming heroine.  One whom learns to be independent and used to being without any relations.  We follow her to learn about how she opens up to accept joy, passion and heartbreak.  How to be courageous and brave as she accepts the choices set before her and pick one that she feels is morally correct to her and to God.  At the same time, Jane Eyre is a beautiful character because of her growth from enduring mishaps and pain throughout her life.

A classic novel is beautiful because of how its shaped and the use of the beautifully contructed language used.  It feels grand and elegant.  This draws me in as I read more and more classics.  At the same time, classic novels like this one are great because of their crafted characters who bound us to them.  Jane Eyre is possibly so far one of the best characters I have read about.  Her life, her descriptions and her words pulled me right into the book and made me never want to put it down till the end.  It made me wanting to know her ending, whether it would be happy or not.

I’m not exactly sure that I’d classify this as a romantic novel despite it seemingly being marketed as one, even the movie Jane Eyre seems to focus on that. Its more the story of a girl who strives to be strong and independent in a society that doesn’t accept those ways easily.  She is strong minded and she knows what she wants.  She has principles and she keeps them even if it means having to suffer a bit with her choices, but following her principles also make her happy.  To me, what makes this book absolutely wonderful, is that Jane Eyre is a very complete character, she is not exceptionally beautiful but plain and most of the time, she knows where she’s going and what she wants, she is independent, strong, imaginative and intelligent.   However, to say its not completely a love story would be false because at least half the book is about her love with Mr. Rochester, the feelings that were developed and how loving someone is a deep, passionate and unforgettable feeling that even when apart would never fade if one was sure about it.

I really don’t know how to end this review right now and its getting really lengthy so I’m just going to say, I recommend this so if you haven’t read it, run along and read it.  This one is fantastic classics.  I’m going to be digging up more of Charlotte Bronte’s novels in hopes that it’ll be as awesome as this one.

What do you think of Jane Eyre? Did you have to read it in school? Have you read other novels by Charlotte Bronte? Which would you recommend?

Jane Eyre is the classic written by Charlotte Bronte and this here is the newest movie adaptation.  I have never read this book before although it is sitting on my bookshelf and it will be done soon. I had no idea what to even expect of it but the box said that it was “a love story as fiercely intelligent as it is passionate.” Sounds like something awesome, no?

Most classics, people already know how it goes or at least have a general idea, but seeing as I didn’t know anything about the story except for that it was written by Charlotte Bronte and that this is something of a gothic novel. Here is the story. Jane Eyre Mia Wasikowska) was orphaned when she was young and her father put her under the care of her Aunt, Mrs. Reed.  She was bullied by her cousin and her aunt found her to be a burden and eventually, at a young age, sends her off to a boarding school.  She gets punished for being rebellious in her actions and not always conforming to the ways at this school, there she befriends another little girl, Helen who dies in front of her.  When its her turn to leave this school, she leaves and finds herself employed as a governess at Thornfield Hall.  It’s there she meets Mrs. Fairfax (Judi Dench) who is the housekeeper.  When she finally meets the master of the house, Mr. Rochester (Michael Fassbender), she is treated as an equal.  Mr. Rochester is a man with dark moods which matches Thornfield Hall which is said to be haunted with a dark haired woman where screams can be heard and strange things occur throughout the night.  Thornfield Hall seems to have its share of secrets.  However, despite all that, a connection starts to draw Jane and Mr. Rochester together.  When things start to go out of hand, Jane decides to seek refuge and eventually gets saved by St. John (Jamie Bell). 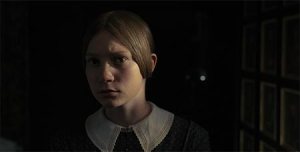 As I haven’t read the novel, this will be seen as a standalone movie.  However, I will say one of the most captivating aspects of this movie is its lighting.  It stays true to the gothic style that the classic has.  At times in the movie, I actually felt an eerie feeling that you’d feel in a horror movie.  It made me sit at the edge of my seat and wonder what was going to pop out of the dark.  Its not just a love story but also a thriller because of all the secrets that are hidden in Thornfield Hall.  In most of the scenes the lighting is usually from either natural light of the outside or when inside, its from the light coming through the windows or candle light and lanterns. This helps set the tone of movie.

Aside from that, the two main characters are just amazing.  Mia Wasikowska is an beautiful actress and she portrays a simple and plain girl who hasn’t felt much (or any) love in her life.  She questions the nature of love and she ends up finding it in the rarest place.  The last time I saw Mia Wasikowska was in Tim Burton’s Alice in Wonderland.  As much as many people did like the movie, I did appreciate her performance there.  She played this role perfectly.  As for Michael Fassbender, I know him from last year’s Prometheus as well as 300 and X-Men: First Class.  His role as Mr. Rochester definitely was great.  He showed how Mr. Rochester was dark and deep.  At times, he would be blunt and direct with his sentences however, his desire to understand Jane Eyre was also shown.  He showed that even though she was just a governess, he respected and confided in her.  When they finally fell in love, you could feel their chemistry.  Michael Fassbender can act with his eyes and that is one of the greatest skills of an actor (in my opinion).  He emitted his passionate love for Jane Eyre and you can just see the strong emotions in his eyes.

I’ve already reviewed two classics in this marathon.  This one is completely new to me.  The first thing I did when the movie finished was to watch the deleted scenes and then leaned over to my bookshelf and pulled out Jane Eyre and put it in queue for the coming novels to read.  This movie is just that great.  Its an epic love story with dark secrets and unexpected turns filmed in an natural lit setting which gives off the gothic dark mood that I presume the novel is set in. I highly recommend this movie.  Its just a beauty to watch.

For those who have read this Charlotte Bronte classic, is it supposed to be dark? What do you think about the adaptation if you’ve seen it?

Do you think that movies that use natural lighting that makes every set a bit darker to be a effective means to set a suspenseful and eerie scene?  What do you think about Mia Wasikowska and/or Michael Fassbender?