Blood in the Snow (BITS) Canadian Film Festival kicks off tomorrow, November 22nd at the Royal Cinema in Toronto, Canada and runs until November 27th. This festival celebrates contemporary Canadian horror, genre and underground films. While the festival only runs a few days, it is filled with not only full-length feature films but also two short film showcases, industry panels as well as a web series showcase.

You can find the festival schedule here. 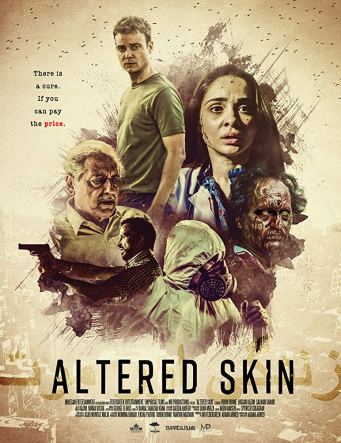 An American expat living in Karachi, Pakistan, Craig Evans is married to Insiya Zia, a Pakistani doctor. During a routine hospital round, contracts a virus called the MN-2. A devastating pathogen, the virus causes uncontrollable outbursts of violent rage. Then when the dead body of an investigative reporter turns up in a sewer, it sets off a domino of events that lead Craig to the mystery behind the virus…and to the last chance at saving his wife. – BITS 2018

Medical thrillers are not frequent as thriller material but have had its success. Altered Skin comes somewhere midway. The execution is clear-cut and straight forward. It starts off on the first act setting up the story and what happened to reach the point of conflict. The second act focuses on the suspense and mystery and just like any thriller, building up the unanswered questions that keep its audience intrigued and the third act works towards unraveling the final reveal. Thrillers thrive on how well the setup of the mystery is done to create the shocking yet logical fundamental twist or reveal. In some ways, that is one of the elements that slightly miss the mark. There is missing a wow factor here. While the execution is done pretty well and the suspense does build well enough, the pacing at times feels like it lingers too long on unnecessary bits.

Looking at the cast and characters, there are a lot of them. The focus is on Craig, played by Robin Dunne, who for some reason feels very rigid in this role. Something never quite feels convincing enough. Maybe it is the script and dialogue that feels slightly clunky in parts. Maybe it is the sheer amount of characters that shuffles around that never creates enough depth to connect or care about anyone of them. Or maybe it is the flow of events that sometimes try to add horror to its pure thriller roots but never seems to fit in and at times, some moments feel slightly contrived and predictable.

However, all is not lost. What works here is the setting in Pakistan plus the effects are done well, both sound and visual. The altered skin victims also have a zombie-like sort of nature to them which is also pretty impressive to see and adds to the mystery element. Altered Skin might not be perfect, but it has the makings of a well enough thriller. Packed with some intense moments throughout, the only thing lacking is the build up to the reveal that becomes slightly generic and falls short of its potential.

The world premiere of Altered Skin will be showing at BITS at The Royal Cinema on November 23rd at 7:30pm.