We’re back with another weekly adventures!

I’m sorry that its taken me a little longer than usual to get back.  To be fair, I did say that this would take 3 weeks instead of the normal 2, at the very least.  I really wanted to be back, you know. Like, there are things happening and I’m not just forcing up some updates for nothing.  Although, last time I really did want to get the updates and announcements out.  I’m starting to think weekly adventures are a good way to get it through. So, when it does say updates and/or announcements, this will be where I’ll do it! 🙂

Back to business, what has been going on, you ask? Well, lets see what little adventures I’ve been in the last few weeks. Let’s go!

Kosmos -TV series was funded on December 2014.  I had signed up for the exclusive of the Episode 1 and a limited edition personalized frame from the show signed by one of the cast or crew.  Finally, after a few months, I got it in the mail.

Plus, the show is for free viewing on Youtube up to Episode 4 now. You can check it out below:

Kiss Me, Kill Me was funded on November 2014.  A part of the reward came to me in the form of a Virtual Premiere.  I almost didn’t make it but I managed to give the movie one viewing before the link expired.  No regrets at all! Here’s the trailer:

While it has a strong LGBT focus, the story of this thriller is great and the acting is rather good as well.  Consider me rather impressed.  I’ll be posting up an actual review when I get the actual movie with the final reward which I had backed for a DVD copy.

$5 Drawings by Dada was successfully funded in September 2015.  I used to go to college with Dada and she’s always been an extremely creative person.  While I didn’t have money to back a higher tier, I still loved the random work of art I received on 7 x 10 inch paper using color pencils (I chose the medium).  It was beautiful. I just need to figure out a way to frame it up or somethin and decorate my walls.  You can check out her work on Instagram @dada16808

On October 11th, 2015 (the past Sunday), I got married! I know I’ve been ranting about the crazy wedding plans but trying to kind of not be too overbearing about it but things worked out fine.  There was some hiccups but with the help of some amazing friends, everyone played out really well! Everyone had a great time and I saw so many wonderful friends and family that I haven’t seen in ages and connected with others that I never knew really well but did more afterwards. I did debate doing a huge post on it but we’ll see.  For now, here are few wedding pics of decors and dresses and all that fun stuff 🙂 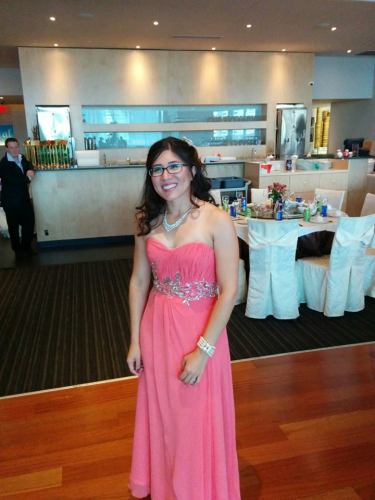 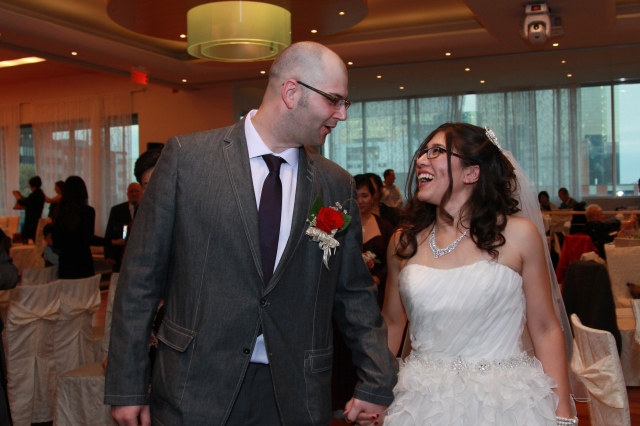 Cake and Cupcakes were done by Montreal Cake Guy.  Despite being hurt the day before he had to deliver the order, he still managed to get it all done and we found a way to accommodate and got one of my best friends’ boyfriend to go pick it up for me the morning of.

On a side note, I had to doll up for the wedding.  Thanks goes out to the lovely  Groupon deal for the mani-pedi from Beauty Box in Brossard.  And hair goes out to Coiffure Spa Portobello

I know I’ve been hinting at Halloween with Netflix A-Z having two movies and a book review of Ranger Martin.  It was an effort to keep with the theme but now that the wedding is done and I’ve had a few days to recuperate from that one very crazy but memorable day, I’m ready to get back on track here! We’re kicking off  the Halloween Marathon officially!! Later today, you’ll be getting the first review for our highlight series, A Nightmare on Elm Street. Have fun and enjoy! My line-up for filler horror movies have been changing and its probably just going to be absolutely spontaneous save for one recommendation but its happening! Have lots of fun! Enjoy this half of October full of horror reviews! 🙂

On a side note, you all know things don’t quite return to normal until the New Year with NaNoWriMo in November and Christmas related posts in Christmas.  Netflix A-Z will return in November however but everything else will be just a mixed bag of backlogged posts that I’m accumulating right now.

—> No upcoming posts this time around! You all know whats up for the next two weeks! Halloween and all that jazz!

To wrap it all up, here’s a little music to get us all relaxed and feeling all warm, happy and bubbly in a 360 video!

Happy Wednesday, my lovelies!
Have an awesome day!! 🙂

We have learned on Friday (and many times before that) and reminded very often that life is delicate and fragile.  We must take measures to take care of those around us.  We strive to conserve the flora and fauna around us by setting reserves, national parks and conservatories.

In 2011, I went to Niagara Falls with my boyfriend and there you can find the Niagara Parks Butterfly Conservatory (I attached the link, just click on it and it’ll bring you to the website for those interested).  It was the most beautiful experience.  You have 2000+ butterflies fluttering all around you.  It is their man-made habitat to conserve them from the dangers that exist outside.  They are in all sorts of colours. You can spend hours standing and watching and taking pictures of them feeding, taking off, landing, etc.  However, even in a conservatory, we had to be careful to not move too quick and hurt them.  Even with all these measures, there were some that still had little injuries on their wings…So prove that, life is definitely delicate, especially with these little beautiful butterflies…

This butterfly did land on me.  I had the opportunity of having 3 land on me during my entire stay and I was so nervous to hurt them. So I stood around until they fluttered off or when I moved, I did it even more slowly.

Life is delicate, isn’t it?