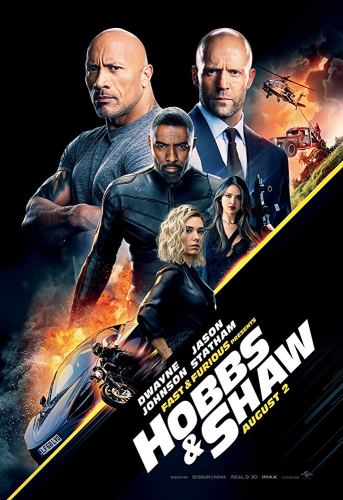 The ninth film in the Fast and Furious franchises heads into a change in gear as it turns around to focus on what used to be two side characters that rose over the last few films: Luke Hobbs, appearing first in Fast Five and played by Dwayne Johnson and Deckard Shaw, who made his appearance as a cameo in the 6th part and was the baddie in the 7th. Hobbs and Shaw are definitely fan favorites despite not being in the leading roles in the previous films. Breaking free (mostly) from racing and heists, this one puts them on the other side of the table as they are recruited to retrieve a stolen virus suspected to be taken from Shaw’s MI-6 agent Hattie (Vanessa Kirby) when she only did it to prevent it from getting into the hands of Brixton Lore (Idris Elba) but causing her to have a limited amount of time to take it out of her body before it kills her and the world. A true everyday hero story, right?

Its important to go into Fast and Furious films with rather simple expectations of being fulfilled by mindless entertainment. With Hobbs and Shaw, its expected also that it rides heavily on the love of these two characters specifically. The story takes the time to make this a little bit more of a personal adventure for the two as each of their families and backgrounds get revealed a little deeper from their family relationships, sibling rivalries and such. There are some absurd scenes and illogical moments but it all comes with the Fast and Furious title and is also expected. Hobbs and Shaw did everything that was expected of it, which is pretty good.

Except…Hobbs and Shaw also has a ton of flaws. Nothing about those expectations that were met but rather, in its polish of it all. For one, it runs quite long and in some parts does overstay its welcome. One of the main deals is that the Hobbs and Shaw insult sequences start off to be quite funny but as it happens over and over and over again, it does tend to be less so. At the same time, it also underuses a great villain role like Idris Elba which is like Terminator with a Transformer bike as Brixton Lore and yet, he never reaches the level of dangerous villain that would have been expected probably because of not so much screen time and most of it being caught in enhancements, chase scenes or fight scenes making his character fairly shallow (not sure if thats the right word to use here).

Talking about those fight scenes. On one hand, its great that everyone here has the ability to do the scenes and there is an attempt of keeping it a lot of close combat melee and such with props and whatnot. It has a nice angle with the finale which was a big one to say the least that had its great bits. When not in the chase scene or anything else, the big fight which was especially apparent compared to the previous scenes was the amount of cutting shots as the camera moves around too much, making the scenes less immersive to watch because there was no flow. It was honestly a bit too much with the size of the scene and amount of action going on.

Overall, Hobbs and Shaw is fairly on par with my expectations and also has elements that was slightly disappointing. Disappointment is a hard thing to get over with, possibly worse than a bad movie in general. Fact is, Hobbs and Shaw is still fun entertainment and it still has a lot of decent moments and funny one liners and comedic comebacks. The acting is alright and falls in character with these two characters especially and its hard to not love Hobbs and Shaw’s family like Shaw’s mother is played by Helen Mirren or especially Hobbs mother who commands her family by waving a flip flop around. Thing is, Hobbs and Shaw, if you look at it, is like a reboot of The Fast and the Furious but without the focus on cars and heists and yet for these two characters, its about family and two rivals finding friendship together right down to the romantic angle. It stays true to the values of the franchise, which is okay. At the same time, it does need some credit for bringing in some fun cameo roles like Ryan Reynolds and Kevin Hart for example.

Be sure to check out The Lambcast episode where I was guest on for a discussion/review of Hobbs and Shaw HERE.