On the same day as The Drownsman (my review HERE if you missed it), I saw Time Lapse with my boyfriend.  We had a double movie date plus, it was absolutely awesome that both movies were world premieres with Time Lapse being on its second showing (so not really world premiere anymore but just minor details) and had the cast hosting with Q&A.  Time Lapse has a really awesome concept and the trailer was so awesome.  When I saw that the first showing was one of the first movies to be sold out, my anticipation grew exponentially. 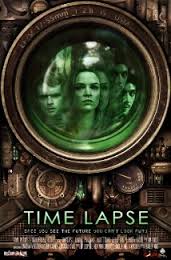 A couple, Callie (Danielle Panabaker) and Finn (Matt O’Leary) and Finn’s best friend, Jasper (George Finn) live together in a complex.  While each are dreaming to pursue their own lives, some riskier than others, when checking up on a neighbor’s home, they discover a giant machine that is pointing into their living room and prints out photos every 24 hours of their future. Although Callie and Finn are reluctant at first, they are soon convinced by Jasper to use this machine for personal gain.  However, when the machine starts showing disturbing images, things start to go horribly wrong and knowing about their futures start messing with their own course of life. 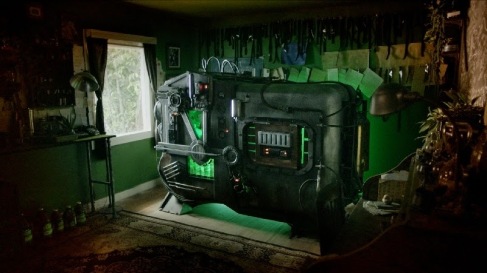 Time Lapse is a spectacular sci-fi thriller which kind of tiptoes into the time travel area.  Time travel is always a tricky area to go into. I remember last year I saw I’ll Follow You Down and despite some little bits and pieces that didn’t fit well as I pondered on it more, it shows the ambition of diving into anything that works with this area especially when it is an independent film.  With that said, Time Lapse takes a very huge step and thanks to the brilliant minds of screenwriters Bradley King (also director) and BP Cooper, they put together a story that keeps us at the edge of our seats as the story slides down that slippery slope.  What started off at a beautiful relationship: love and friends turns into something completely into the ugly area of manipulation and greed. 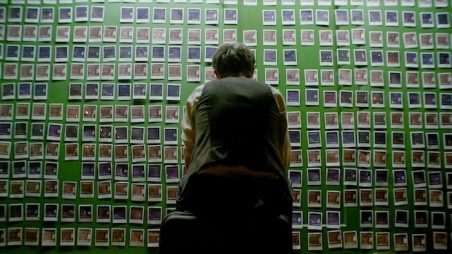 Time Lapse is a well-rounded movie and one thats very enjoyable because although you may have a little questions and details, there are so small that I can’t even remember them right now.  The screenwriters are also very great because they address little issues and double back to give you answers.  As much as I like room for imagination, and they do give you that as well, they also give us enough answers to be satisfied and just enough questions to keep the audience intrigued.

I can’t compliment Time Lapse without talking about the phenomenal character development and the amazing cast. You will see that each character develops as the plot thickens in each their own ways.  Everyone has something they want to protect, some gain they want to see and what is really at stake for them.  I can’t say that I’m particularly familiar with the cast except that the familiar face goes to Danielle Panabaker and I saw her in Piranha 3DD (minus the 3D since I saw it on Netflix) recently but that is a waste of her obvious talent.  Her character, Callie is one of the best characters in this movie because she gets caught in a few dilemmas and it just spirals out of control. And then we have the other totally amazing actor, George Finn who plays Jasper that just falls right into the role and convinces us every step of the way.  Although, not quite as out there, Matt O’Leary also delivers a great performance as the guy who tries to be the moral balance in this.  Except the question is, when personal gain is pulled in for whatever purpose or reason, are there morals that remain?

I’m going to end this write-up right here because anymore and I’m going to destroy the awesomeness of it.  The best part for any thrillers is to sit through with as little knowledge as possible and just dive in.  Time Lapse will carry you on a journey following the lives of these three friends and make you cling to your seats.  Definitely one of the the best movies that I saw at the Fantasia Film Festival.  Although it is an independent film, everything was done so well from the mysterious machine’s design to the well thought out plot and the amazing way the cast played off each other and carried the plot.  The concept is ambitious and just so awesome.  I love Time Lapse through and through and I urge you to go see it if you get the chance because its been a while a thriller has truly made me feel engaged.

Are you a fan of sci-fi thrillers? What do you think of Time Lapse? Have you heard of this before?