For the record, I haven’t shopped with my best friend in ages.  We both are busy with our own lives and its been tough to even find time to hang out.  Just to mention it…our friendship started 10 years ago in mid August/September.  Maybe subconsciously we both felt it would be great timing and it may be for that reason ;).  I really don’t have too many friends that is still in my life after 10 years and keep constant contact.  This is actually the first road trip that we had just the two of us.  Things went great and we managed to not only see two wonderful movies at TIFF but we also managed to eat some delicious food (I will post soon) and lots of shopping.

We arrived in Markham at about noon and went straight to Pacific Mall to kill some time before we checked into our hotel at 3pm.  I always make the run to pick up some Hong Kong flicks and some blu-rays. I also go to get some dried plums and egg rolls, etc.  These are the movies that I got:

Any of the movies catch your interest? From the top we have Hansel and Gretel:Witch Hunter, Gangster Squad, John Dies at the End, Step Up Revolution, Ip Man: Final Fight (missed this at Fantasia Festival), Spirited Away, Kiki’s Delivery Service, Young and Dangerous: Prequel, The Lady, Drug War, Saving General Yang (missed this at Fantasia Festival), A Simple Life. There were two other ones that were chosen for Venice Film Festival but they weren’t available yet so maybe next time I go again 🙂

Saturday was our actual shopping day and we headed out to Vaughan Mills.  I remember having a lot of fun there last time and my best friend had never been before so we ended up hitting a lot of sales.  I ended up getting a lot of clothes.  The main goal was to get something warmer since Toronto was so very cold.

I bought mostly athletic clothes at Aeropostale.  It was a pretty sweet deal for all of that 🙂 Plus, I think they have super comfortable slim fit sweat pants.

I love Bluenotes to bits because they have such cute t-shirts.  I wanted to buy so many more.  These ones fit me better.

I know that I shouldn’t get anything at Disney outlet but Flounder was just too cute! I had to get it 🙂

That sweater is possibly the most expensive sweater I’ve gotten but its dri-fit and is super warm and water resistant.  I think I have an obsession over Under Armour clothes….okay..maybe I don’t think.

Aside from that, after a lot of self-control, I bought one type of tea at Teavana called Berry Kiwi Colada Herbal tea. 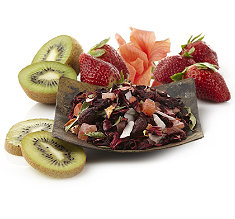 It smelled delicious and fruity.  Plus, they have some Perfectea rock sugar to add in to make it a bit sweeter to cover some of the tisanes sour taste in some.  Its made from beets so its supposed to be healthier also.

For Sunday, time was a bit tighter after the movie so we didn’t end up doing much shopping and rather left for home to get back so that we could both rest up for the next day since we both need to head out to work.

Shopping is always the best with my best friend and it was a memorable trip.  Thats the most important part of it 🙂

Drop by again to see some more of Toronto and especially for the movie review of TIFF 2013’s showing of Hong Kong Chinese vampire horror movie, Rigor Mortis. Its taking me a bit longer to put together the review but it will be up very soon.