Its been a good few months that I’ve posted anything on going out to restaurants.

A few months ago, I found a pretty good deal on Groupon for Jack Saloon in Quartier Dix30 in Brossard.  Its been a place I’ve been wanting to go check out with my boyfriend.

Situated down the main strip of Quarter Dix30, Jack Saloon has a great location where there’s accessible underground parking.  When you first enter Jack Saloon, the one thing you will not miss is its beautiful decor creating a very stylish ambiance. 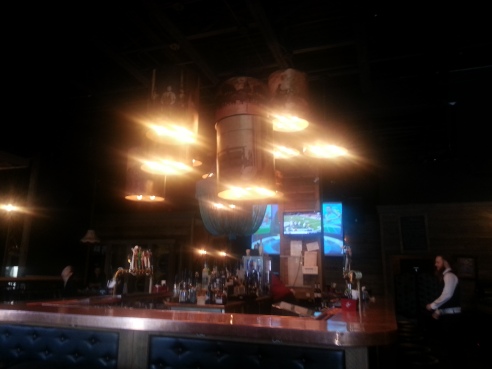 We went for a 5pm reservation and outside was still bright but the copper counters of the bar situated in the middle and the racing and older style pictures dangling above it match the vibe they want to give.  The walls are lined with animal skulls and there are some classic lamp shades to match the lights decorating different corners.

We started off the evening with some cocktails. 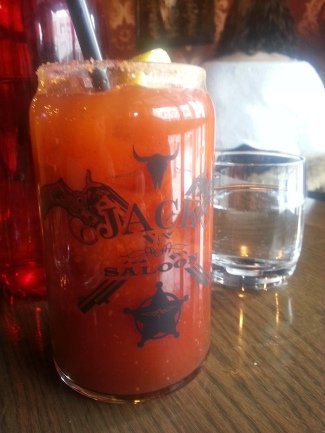 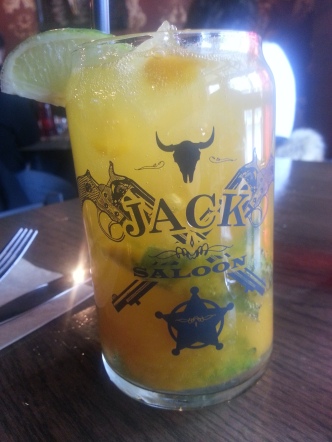 My boyfriend took the Bloody Caesar.  Its his thing.  He orders that everything.  Jack Saloon’s adds a little spicy twist to it with a few extra ingredients.  My boyfriend said that it tasted pretty good but the taste was definitely stronger than normal. I had the Mango Mojito.  I’ve turned into quite a mojito lover and I adore mango so this combination worked for me.  I can’t say I’m extremely wowed by it but it was quite delicious 🙂 Mango is a tricky fruit for cocktails in general, I believe (or maybe I’m just a little picky).

Moving along, Sundays at Jack Saloon’s meant that there was $10 on selected burgers which we could not take because it would render our Groupon useless and we’d have to use it another time.  We ended up both picking something else on the menu and I took the half rack of ribs while my boyfriend took a full rack with a side of onion rings. 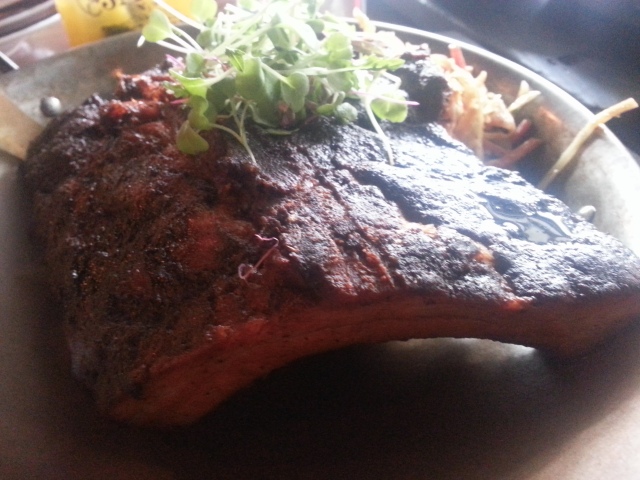 Half Rack of BBQ Ribs 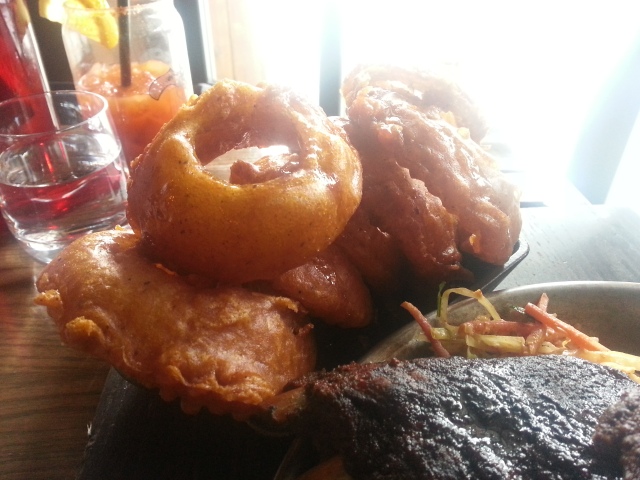 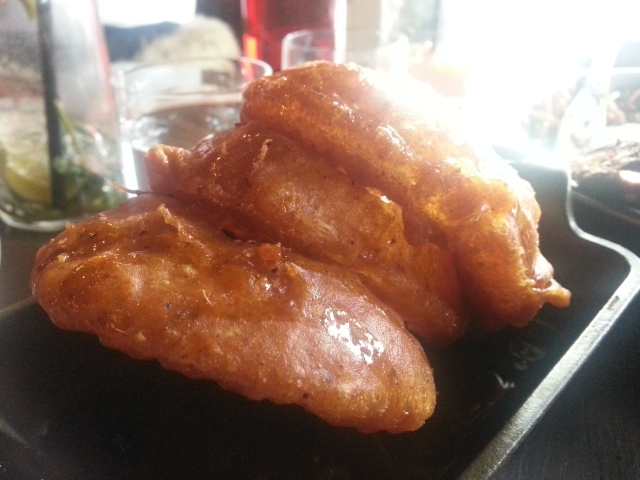 Closer look at onion rings: Its drenched in Honey!!!

I love ribs, oh do I love them? The choice for me was relatively easy, although I equally love pulled pork sandwiches as well.  There’s a ton of stuff to try here.  It sucks that I’m lactose intolerant or I’d have tried the Chicken ‘n Waffles which they also have here.  Anyways, we both had the ribs and the very nice waiter told us that because its done on the smokehouse at the actual restaurant, its going to be drier than the normal ribs that we have elsewhere.  We both were cool with that.

The ribs were spiced differently from other places and honestly, it may look dry but the taste was really awesome.  I’m glad I took the half rack because I don’t deal too well with spices (completely my own digestive issues) and this was just enough to satisfy my appetite and still be happy.

The onion rings were the star here.  I didn’t realize it was drenched in honey until I took my first bite.  The onions were cut large and usually I don’t like that but with the honey and the delicious crust, it just melted in my mouth.  It was so awesome and heavenly! 🙂 I took the second picture so that you could see the honey while the first one is the portion size of the accompaniment.

Jack Saloon’s is a pretty cool place to go.  The prices are a little higher than average and they may not have a huge selection on their 2 page menu but every choice is unique and original and they add their own little flair to it.  The ambiance and decor is extremely stylish and comfortable and well, the food was satisfying and delicious.  Oh, and the service was also very good.  We had a friendly waiter and that makes the experience every bit more pleasant.