Wow! Its been a pretty intense weekend on my end! Thats usually how December weekends look all the way to 2014!

I finally  had time to sit down in front of the computer and type this up!

For those of you that follow my workouts know that I’ve been on my Dietbet, after Friday night’s Dragonboat practice, I lost a bit more weight on my weigh-in making the first week look pretty alright.  Plus, it was an intense workout and it was pretty fun.  It felt great to get back into paddling, although after a long break, my behind is aching again.  Still, I’m happy to be back. One more practice before we have Christmas vacation and resume in January. I’m still on part-time for winter however, but its probably for the best. 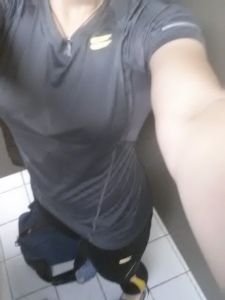 Saturday was an early start! I went out for a walk to the bank instead of taking my car.  It was supposed to be warm but I still geared up.

So, I left in that outfit and then when I walked outside onto the street a gust of wind reminded me that I forgot something so I went back and put on my new hat.  Its really well insulated and that was my Black Friday find 🙂

After that was piano and then running off to my annual Christmas shopping at the Salon des Metiers D’arts of Montreal which is also called the Montreal Arts and Crafts Show. It features arts and crafts entrepreneurs and companies based on Quebec.  It usually has some pretty awesome stalls to start and in the back is where we hit the food and wine products which is a whole lot of tasting involved.  As I’m on antibiotics, my friends did all the tasting of anything alcoholic while I just sniffed it to get an idea and they gave me suggestions as to which was better.  Still, one stop to clear most of my Christmas shopping is a sure win for me.  Lets check it out!

Everything that I bought at the show

Lets take a look one by one!

First buy was last year’s winner in my book, food-wise, La Nougaterie. They sell nougats and this year they even had marshmallows and for $20 it had 3 nougat bars with a bag of marshmallows and the little Christmas basket. Thats the one in the center on that picture.

Next was the Nutra-Fruit kiosk with their Dried Cranberries infused with Orange flavor which was super delicious and out of all their jellies, my friend said that this Cranberry with Applie Ice Wine Jelly was pretty good.  I gave this to my mom as her birthday gift as it was also her birthday on Saturday 🙂

Next one is a new kiosk called Dinette Nationale who is a sweet factory.  They have this awesome tasting Pistachio Shortbread Cookies.  I gave those to my boyfriend’s parents earlier today since they love pistachio and shortbread so this was a winner 🙂

After that, is the highlight of the show for us.  Not so much for me because I only got to watch all the tasting. 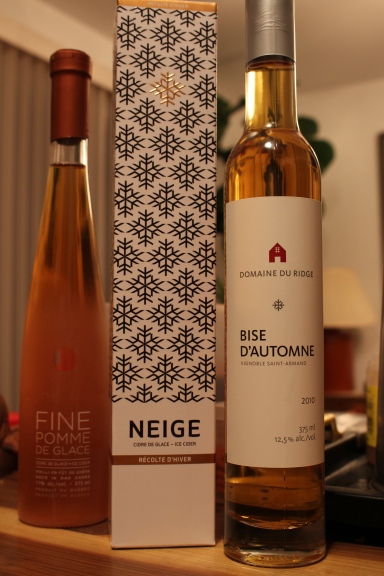 I ended up with these 3 bottles.  I’m going to gift the two on the side and the one in the middle is for myself and Christmas dinner. The two on the left are apple ice wines (my fave!).  The one on the left is a new one and it requires a day of refrigeration and then an hour before to put in the freezer to fully get the best flavor.  The one in the middle is Neige Recolte D’hiver, which is their reserved batch and its one of my favorite ice wines.  The one on the right is called Bise D’automne and its a white wine infused with apple, pear and almonds.

Last up, we have this:

Cassis Monna & Filles is a winery that focuses on blackcurrant flavored products.  I first bought their product for the Creme de Cassis and Blackcurrant Liquour which makes a wonderful Kir or mixed with their recipe, a very delicious blackcurrant based Sangria. This time, I tried some of their jelly and whats funny was that they introduced their new product as Christmas in a Jar.  When I tasted it, I felt like it had hints of ketchup taste to it and that was weird because I thought it was jelly but it turns out, its actually Blackcurrant Ketchup.  Its good for meat pies and white meat, similar to cranberry sauce 🙂 The other one is Blackcurrant Jelly.  These were bought for my own home.

That whole thing took about 3.5 hours to get through the whole thing. Its a pretty neat show.  I enjoy going every year and its fantastic for nice original gift ideas to meet all the needs that you want. A very efficient Saturday 🙂

On Sunday, I had a full day of running all over the place and finally, at night I managed to settle down to take pictures of my Christmas decorations.  My little Christmas tree as always…

And finally, last time with the girls, I bought a whole bunch of stuff for Christmas decorations for a wreath and I put one together and it looked like this!

I bought everything separate but it was great to put it all together! What do you think? My first time putting one together so a little encouragement please? Should I add something more?

I’m going to spare you all music video since I just posted one whole post on it earlier today, if you missed it, check it out HERE!

Are all your decorations up? How is Christmas shopping going for you?

By the way, just wanted to give a little update! Christmas marathon starts tomorrow and I’m going to weave in some 2013 movies that I’ve been meaning to catch up on to wrap up the year in style 🙂