Next Double Feature here! This time its multi-themed, I guess. Both 2018 movies and also part of the Disney movies so we have A Wrinkle in Time and paired with Marvel’s Black Panther. Not the same type of movies or directed to the same audience but I figured it was the best way to pair it together. Let’s check it out! 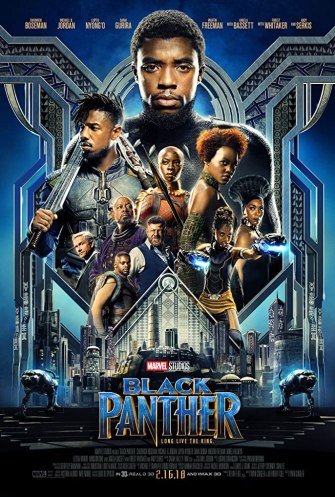 T’Challa, heir to the hidden but advanced kingdom of Wakanda, must step forward to lead his people into a new future and must confront a challenger from his country’s past. – IMDB

Marvel movies are pretty much churning out non-stop at this point with multiple film releases in a year. Black Panther had a lot of buzz and praise. While we had already seen T’Challa show up in a previous Marvel movie, this one takes place after Captain America: Civil War where we did see T’Challa appear in (I think) and while not an origin story is somewhat of the story of Wakanda, their rituals and land as well as how the kingdom is run. It also shows the rise and fall from the kingdom for T’Challa as he finds his way back to the throne. Its not meant to be a bad comment but I actually felt a lot like I was watching the story of The Lion King.

As with the majority of Marvel movies, its the length that really bothers me and its also one of the reasons why its taken so long to catch up with Black Panther. While I still think the movie was a tad longer than it needed to be and dragged in some parts and its still a rather superhero formula type of movie, what stands out in Black Panther is the unique kingdom and clans that surround it and seeing the different characters fall apart or become allies. There’s a sense of true pride with the characters and Chadwick Boseman is really good as Black Panther.

In terms of villains, its somewhat of a two-fold villain where Andy Serkis plays one part of it and then Michael B. Jordan plans the second part of it. Villains are always one of the weaknesses of Marvel movies in my opinion as it has so much focus on the superhero coming out on top that it makes the villain less threatening because it just never has the time to build. In this case, its not exactly great but I’d say that Michael B. Jordan makes for a better villain and it might be simply because the reasoning behind what he does makes sense and has its own backstory that gets revealed and connects everything together.

Overall, Black Panther is decent. I can’t say that I’m running back to watch it mostly for its length. But, in terms of Marvel films, this one falls somewhere in the middle due it having some unique origin story elements, character development and Wakanda “world” building elements.

After the disappearance of her scientist father, three peculiar beings send Meg, her brother, and her friend to space in order to find him. – IMDB

Live action fantasy adventure films for family/children is always a little bit of hit and miss when it comes to Disney offerings. A Wrinkle in Time is based on a 1962 novel of the same name that I haven’t read so I have no comparison to source material and really just how it delivers as the movie. A Wrinkle in Time falls somewhere in the middle. Its feels a bit like pieces stuck together so always has that disjointed feeling but at the same time, the new world is fantastical and just like the three astral travelers, they all happen to be a little odd as well. Its really a search for a father who has gone missing as they chase down where he might have gone because of his research and how the planet needs their help in order to battle the darkness which leaks into their own planet and causes negative things to happen, like bullying and envy. With that said, the sentimental elements here are done pretty well in terms of a family film. Visually, the movie also delivers on all the fantasy and sci-fi elements which is where the story itself truly has a lot of fun.

The cast itself is decent as well with a lot of star power behind it. The three astral travelers are played by Oprah Winfrey, Reese Witherspoon and Mindy Kaling who each have a little personality that balances each other out and their own abilities. The older kids are played Storm Reid and Levi Miller who does a decent job as well. There are other performances by Michael Pena and Zach Galifianakis. All the characters are a tad quirky and there’s a little cryptic element as they go through this search towards helping save this planet from their dangers. The story is a little messy at times but there is a decent level of imagination in what it presents. To be fair, its not completely engrossing to watch but at the same time, its a pretty harmless family film. You get what you’d expect from a Disney family adventure film pretty much.

That’s it for this double feature!
Have you seen these two films? Thoughts?

In the last two weeks, I geeked out a little over catching up with the Marvel Cinematic Universe movies that I missed in 2015. Although, I don’t quite care for superhero movies much since its just everywhere, I did mention that Captain America’s franchise has been great.  I love the movies and the characters and the story.  It has great villains and it ties well into the Avengers universe that its worked so hard to build. With that said, I planned for an opening weekend viewing.  It was just my luck that one of my awesome friends messaged me to go see it.  Friday evening, great company and an anticipated movie: I’d say this sounds pretty sweet! 🙂 Oh yeah, and I think we disappointed the kids around us because we were Team Captain America…all the way!

Its always important for me to talk about my lack of knowledge of the source material of the actual comics.  Its great that my friend actually is very knowledgeable about it and she fills me in quite a bit. Its probably also why she can criticize it a little more.  However, on the car ride over, she filled me in on the Civil War comics and a few things she was worried about happen.  For the record, most of it did happen but it turned out to be a pretty funny moment.  On that note, Captain America: Civil War was really great.  I had a lot of fun watching it.  There were some plot holes here and there but still, as far as superhero movies, Captain America has been three out of three and that’s pretty awesome!

Captain America: Civil War was absolutely entertaining.  There was some serious story but they interjected a good bit of effective humor.  The crew is definitely getting bigger and a lot of the Avengers are part of it, especially the crew from the end of Age of Ultron. We get Ant-Man and then of course, the secret weapon of the trailer, our new Spiderman. They both are kind of the fan boys of the whole deal and they are definitely there for comic relief more than anything.  It also turns the full fight in the trailer into possibly one of the most hilarious action scenes I’ve watched.  I’m going to say that right now. It was so funny that I laughed almost non-stop.  Its supposed to be serious, I guess? But Ant-Man and Spiderman and all the dialogue was great. I mean, on top of that, there was Captain America showing off his muscles reeling in a helicopter which made me laugh because it was a little cheesy but in a lovable way (I guess?) Let’s not forget that what took me by surprise was the completely unexpected new character, Black Panther or whatever you called that superhero.

I always like to address the villain for a second.  To be honest, this villain isn’t really a superhero or non-human or alien or whatever. What makes him effective is that he puts into question the role of The Avengers and just whether they are serving the purpose they are meant to: protecting the people and society, even if they kind of are what attracts the danger also.  But, this is what sets off the Accord and in many ways, its also what causes the break in the “bromance” (that existed in a vague way) between Iron Man and Captain America.  But our villain is a regular guy (kind of!) who has an agenda to cause the Avengers to self-destroy by turning on each other.  He’s kind of shady and looks normal but he also is smart and pretty much a schemer because he manages to manipulate many situations to his favor and that is what makes him a little scary to deal with.  In that way, he is probably  more effective than the other villains in many of the Marvel movies so far.

While Captain America: Civil War is just pure awesome fun and I really loved it and it made me laugh a lot and feel for the characters and if anything, the story of Captain America and Winter Soldier and all that stuff makes the most sense out of all of these Marvel superheroes and done in a good way and its credit goes to the directors.  There were some rather cringe-worthy parts and some random parts that felt a bit weird.  I mean, the whole recruitment bit of Spiderman was entertaining for its means but everyone had a consequence but Spiderman just kind of vanished? I think the new Spiderman is alright, there’s not enough to define whether he is a fitting cast yet but we had this discussion about how Peter Parker acquires his Spiderman skills seemingly younger and younger and his Aunt also is cast younger and younger. You know, little technical details, right? Nothing that is an issue, just a weird observation.  On top of that, I heard that Vision and Scarlet Witch is a thing in Civil War (in the drive to the theatres from my friend and what she didn’t want to happen so yeah…its a thing.  Guess this is spoiler-alert), and their scenes are super awkward.  Maybe a little cringe-worthy? I can’t figure how I feel about it yet.

Overall, Captain America: Civil War was an awesome addition to the Marvel franchise.  Its actually a refreshing and unexpected feeling.  While I’m a huge fan of the direction Captain America franchise has gone, there’s a point when a franchise loses their steam and a lot of times its when it hits the third movie but luckily, that didn’t happen in this case.  I had a lot of fun.  I liked the story and the villain was good.  There were some wildly entertaining action scenes along with some pretty intense ones as well.  The relationships between the characters and building it up was pretty good as well.  There’s still some questions about little details but the point of a superhero movie is to have fun in its blockbuster glory and Captain America: Civil War did exactly that and even managed to surpass my expectations.

Have you seen Captain America: Civil War? What are your thoughts?