In the spirit of Halloween, it was time for some TV Binge horror. Well, in this case, horror comedy. Scream Queens has been doing incredibly well and in its Season 2 so I figured that its fresh launch on Netflix meant it was time for me to give it a go! With a cast full of people I like a ton, I can’t imagine not enjoying it. But then, I also know nothing about the story or what its about. That does seem like a trend I’m having of late. It is also probably why I haven’t watched Stranger Things yet because there is just so much talk about it with some phenomenal comparisons. However, we are here to talk about the first season of Scream Queens.

A semi-anthology series that centers on returning characters being terrorized by a serial killer in different locations, including a university and a hospital. –IMDB

Season one of Scream Queens is set at a university and the focus is with the sorority house Kappa Kappa Tau. It is quite hard to pinpoint how I actually feel about Scream Queens. For starters, it has a lot happening every episode but somehow each episode does feel quite slow and long. Scream Queens has a weird sort of humor that sometimes works and sometimes just induces eye-rolling. However, it does have an outstanding cast. I love a ton of the characters here probably even more than the story it is trying to tell. That doesn’t mean that at times, there are some nice tension-building near the end, but also a good bit of manipulative or guided scenes particularly in the end. A part of it is figuring out whether some decisions would have worked as it is better or if they had did various reveals in the first half a little more slowly which takes away the final unveil of who the Red Devil is and what the story behind it all is. I was happy to make it through the series and it was a sigh of relief to finish it. I’m happy to keep going with Season 2 but after a little break since it is a little harder to get into the story here. 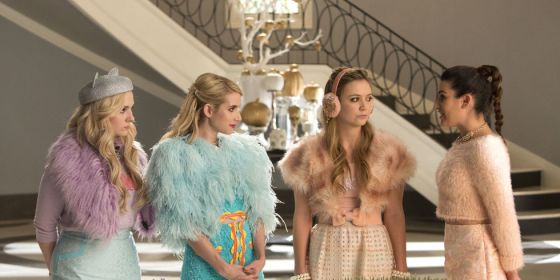 As much as Chanel and her minions of Chanels called by numbers are really exaggerated portrayal of what rich sorority girls are, that play is sometimes fun. However, they are sometimes quite ridiculous and awkward. The cast is spectacular. I personally love Emma Roberts and she takes the role as Chanel incredibly well. Billie Lourd is rather unknown except for her role in Star Wars 7 (which probably you all may know her from there) and I really enjoyed her as Chanel #3. She plays the emotionless girl with a weird background and hidden secret and at times, it comes off genuinely hilarious and she never laughs so it makes it even more fun. While Abigail Breslin is one of the actresses I like a lot, more when she did her younger roles and because she has less roles nowadays, this is something I look forward to seeing her as Chanel #5 grow. New addition fairly early in the group is a pledge from Hester, played by Lea Michele, who is the typical girl with neck brace and all (reminds me of one of The House Bunny’s character) and she is completely different from her role in Glee. In this one, she comes off rather creepy because of her obsession of death.

In terms of characters, I truly liked a ton was the new pledges to the sorority and it takes a while to enjoy the main characters of a show but funnily for not enjoying the pace of a series, the main girl Grace, played by Skyler Samuels was one I liked a lot. She’s tough and smart but at times, very clueless about who to trust and not trust. One of my favorite scenes are above. If anything, I liked it even more when she was with Pete, played by Diego Boneta, who is someone I haven’t seen since his small roles in 90210. Hopefully, he’ll have more TV or movie roles eventually. While he has quite the potential to be a great actor, the fact that he can sound and even looks a little like Matthew McConaughey may be what makes it harder to succeed. However, I loved his role here. He plays as the investigative journalist who is researching the Red Devil killings and a big secret of Kappa Kappa Tau. Keke Palmer is also one of the more dynamic characters here. Talking about awkward, we can’t not mention Jamie Lee Curtis who I questioned as to why she took this silly project on as the Dean of the university. But man, is she a fantastic actress and does the role so well. In fact, she may be one of the more dangerous characters in the season and doesn’t even need a mask because she is smarter than that.

The most ridiculous and somewhat pun-y and awkward people has to go to the sorority boys collectively called the Dickie Dollar Scholars. Oddly, none of them go to class just like a ton of the girls don’t either probably. These guys are just stupid and it makes it more fun to laugh at how silly they are, and I mean every single one of them. The leader of the crowd is Chad, played by Glen Powell, who is quite the douchebag. Funnily enough, he never is the target, probably because he is too stupid to be one but that adds some extra fun. One of the best scenes has to be that one up there as a Backstreet Boys song plays and they are somewhat acting out what the music video would be like or at least reminisces. And that actually sums up what I feel is entertaining about Scream Queens when it reminisces on some very great movies. In the sorority houses, there is even a hint of Mean Girls there with all the not eating and the extreme abuse to the other sisters in the house.

Like I said in the beginning, I think the character designs here are entertaining to watch. However, the flow of the story had its issues. One of the other issues I had was the Red Devil, our killer of this season. It also is one of the main things of slasher flicks that gets me sometimes, at least the not so well done ones. The Red Devil is a creepy character with the mask and the entire costume and it being the university mascot and all that. It can get through here and there and actually is quite stealthy. However, the issue with the Red Devil is that the secret killer itself becomes somewhat apparent near the last quarter. On top of that, the last scenes make too much of an effort to keep whoever is hiding mysterious. It goes a little too coerced (that is the best way I can say).

Overall, Scream Queens is good. Its a little tough to get into but the characters are constructed rather well even if they take a while to love even with all their flaws. The best moments are those that reminisce on 90s pop culture. The Red Devil is effective in some parts but always feels a little too deliberate. In many ways, perhaps Scream Queens is supposed to be a little over the top to mock the slasher horror genre a little while still having some creepy moments.

Have you seen Scream Queens Season 1? What are your thoughts?