First of all, I’d like to apologize for the next B-Horror that I ended up skipping with the same votes as this one.  Its because I realized its part of this 1313 series and I felt like I should probably see other ones.  Its kind of a weird thing I have with trying to watch things in order.  So I decided to watch this one instead.  Also, you’ll see that I’ve chosen less B-horror because Friday the 13th franchise is already a rather low-budget sort of thing and could easily pass for this (at least I think it does without looking deeper into the budget and whatnot because its really not my thing).

So, here we are: Hansel & Gretel.  Not the Witch Hunter one with Jeremy Renner and Gemma Arterton.  I already reviewed that one last year right HERE. This one is from Asylum and is not set in the past but its very much in the present.  What intrigued me was that its directed by Anthony Ferrantes which is also the director of Sharknado 🙂

The modern retelling of Hansel and Gretel.  Gretel (Stepanie Greco) works at a The Gingerbread House and after a disagreement with her brother Hansel (Brent Lydic), she goes to look for him in the woods where they used to go with their deceased mother.  Once there, she finds Hansel hurt and takes him to a nearby cabin which turns out to be owned by her boss, Lilith (Dee Wallace).  They end up being held captive and trying to find a way out.

What is there to say about Hansel and Gretel? If you carry Sharknado’s expectations into Hansel and Gretel, you will most likely be disappointed.  Its far from being as fun as watching sharks twirling in the sky along with a gun-wielding man shooting in the sky to protect his family.  I didn’t loathe this movie.  It wasn’t boring, even if it was about to hit that area.  Its super predictable, as you’d expect from Asylum.  The story is been there done that anyways.  Still, I felt oddly indifferent at the end.  I didn’t hate it but I didn’t like it either.  I guess I liked parts of it? Where do I start?

Hansel and Gretel is a good place to begin.  I actually wanted to punch Hansel in the face at the beginning because I really didn’t know if he was a teenager or some university student or something like that. Gretel seemed like such a do-gooder also because she worked hard.  Either way, Hansel was just whiny and a glutton because he ate sweets all the time.  I mean, I emphasize sweets because the movie emphasizes that also.  Like I get this is a Hansel and Gretel movie and in the actual fairy tale, Hansel is the one that falls for the witch’s tricks and gets pumped fat and almost gets killed.  At least thats what I remember.  Its just so in your face about it.  But thats okay, its Asylum and they do that.  He’s just so intolerable as a character and then in the middle he turns right around and turns into the most useful person in the world because he knows how to pick locks (despite being clumsy) and he stays calm and collected (for the most part) and he gets all down to business.  I totally liked that Hansel more but correlation and continuity, whatever you call it, the character didn’t develop, he just flipped.  Maybe thats what danger is supposed to do to you?

If anyone is convincing (most of the time), its this lady below, Dee Wallace playing the “witch”. She was pretty batshit crazy and on top of that, she was really creepy.  I could believe that she was a witch without her ever shifting form.  Sure, the script doesn’t give a whole lot of scares but when she was on screen, especially the sudden burst of anger.  That was pretty creepy. 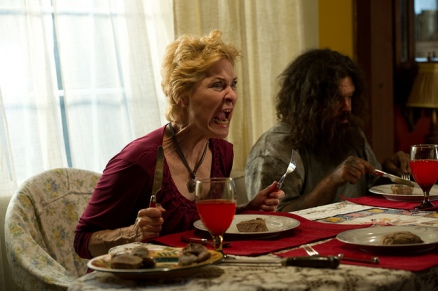 There was one thing that I have to mention.  Hitting the middle when all hell breaks loose and Hansel and Gretel know whats going on and they try to break out and all that happens afterwards, there’s some pretty cringe-worthy scenes.  Maybe they look fake, maybe they don’t.  It was just super disgusting. There was one part I had to look away because it just made me mega nauseous.  I usually have pretty good tolerance with this sort of thing but this time, I just had to turn away in those few parts when they were making a getaway inside the house.  I’m still debating whether that part was necessary or it was just added for the sake of making it nauseating.

As I write this I realize how to describe this.  It was inconsistent.  The characters had sudden flip in personality (like Hansel’s example) and the style went from somewhat tame to revolting.  It was just like a switch went on and they just realized that they had to change the pace suddenly so there was no transition.  Oh right, and the ending was so obvious too.  It was a really cheap attempt to add a twist.  Honestly, I’m not saying I hated or liked this.  That would imply that I actually cared and I don’t really care that much. Trust me, I’m not being harsh because my expectations are always low when it comes to Asylum productions.

Have you seen Asylum’s version of Hansel and Gretel?

Next up is Sharknado! My boyfriend honestly thought it was a joke when I told him that I’m going to watch this because he hadn’t heard about it before.  Unlike him, I’d had multiple recommendations to see this and I’ve read a fair amount of reviews from all of you lovely bloggers. Suffice to say, this was tied with the highest amount of votes (separate categories of course) but it was the highest votes I had.  I’m pretty sure at least a few of you will be happy to know that it got included 🙂

I’m actually pretty excited to get out of the slashers and thrillers and head into something completely requiring zero brain power! Lets check this out! 🙂

A massive hurricane is about to hit Los Angeles.  Champion ex-surfer and beachside bar owner Fin (Ian Ziering), along with his friend Baz (Jaason Simmons) and employee Nova (Cassandra Screbo) heads out to rescue his family: wife April (Tara Reid) and his daughter and son, despite the flooding that has brought sharks to invade land, sea and sky also.

I repeatedly use The Asylum productions for the famous Shitfest hosted at The IPC.  One of the most memorably bad one was 2 Headed Shark Attack.  Seeing as I saw that along with the even more destructively boring 100 Degrees Below Zero was not even close to anything along enjoyable, I had my doubts about Sharknado.  I mean, what could I expect? Although, I always wonder if it could get worse (which I’m sure the answer is that it could). 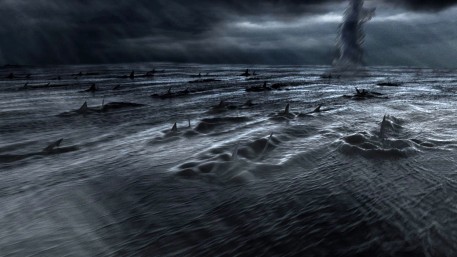 Sharknado is the exception to these direct to video Asylum productions.  Maybe it was because I had no expectations from it or just that I’d expected to be horrible and plus, I already knew what to expect: bad CGI, exaggerated acting, ridiculous dialogue and illogical storyline.  Still, I’m here to tell you that Sharknado is an absolutely fun treat.  Yes, it has all of those things and it does it in the most shameless way but who doesn’t like to see sharks everywhere plus, characters that make some pretty crazy decisions.

I seriously have no idea how to talk about a B-horror when its a treat. So here’s just a few pictures to show you a bit about Sharknado (and maybe a few of my personal comments) 😉

I think its the first Tara Reid movie that I’ve enjoyed so thats a plus. And as stupid as some of the dialogue was and the cast wasn’t anything special, I really liked the main dude Fin played by Ian Ziering. Plus, the girl who plays Nova isn’t bad either.  No one was really annoying so thats another plus. The daughter still has issues she likes to talk about while trying to survive this craziness but hey, when’s a better time than possibly dying any moment than to talk about how important you are to your dad, right? 😉 Not a complaint, just an observation..haha!

What makes it great is the crazy action-ish scenes like this 😉 This is just the beginning of everything and it gets way out there. Thinking of those scenes actually makes me kind of happy.  Ultimate guilty pleasure anyone? Yeah, this is definitely one of mine!

I could use so many more awesome gifs but then I’d be spoiling all the fun and we can’t have that.  Whats showing Sharknado without some airborne sharks? I totally recommend Sharknado because its just awesome brainless fun.  I finally found a movie I like from Asylum! Woohoo! 😉 Shut off your brain and enjoy this one! Its really everything you expected but completely not at the same time.  Maybe that doesn’t make sense to you but it does to me 😉

Any thoughts on Sharknado? Did you find it entertaining? Are there any other Asylum movies you would recommend?