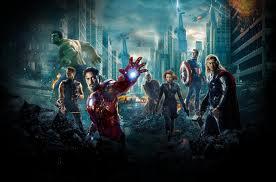 Last Saturday I went to go see The Avengers with a group of friends.  I don’t know much about superheroes other than by names.  I have no idea what their individual stories were and I even planned to watch a few superhero movies such as Ironman 1&2 and Thor (since I own it but hadn’t found time to watch it yet).  As usual, I ended up not having the time to do so but still I went, a bit of worry that I’d be lost.  Fortunately that did not happen and I found it amazing.

There has already been many reviews on The Avengers and many people probably already have a general idea of the plot.  I think that is part of the appeal of superhero productions.  The plot is always very simple but with some twists here and there.  There is a villain (or a group of them), some scheme goes down and the superhero(s) come in and save the day.  Straight forward!  There is a lot of fighting, a lot of explosions and a enjoyable adventure to watch.

With all the rapid developments in technology, the films that use a great amount of computer graphics are the steal a lot of our attention and this is especially applicable to superhero movies. The last few days, I’ve been watching Ironman 1&2 as a complement to The Avengers hype going on and just looking at the development of Ironman gear.  Not only in the gear, the costumes, the weapons, but especially Loki’s army was just so…WOW! (as lack of a better word).  I found the movie compelling at parts where we felt like we were in it and we wanted to do something, we felt like we were part of it.  I think that feature was worth a whole lot of applause (which the audience in my theatre gave at certain parts: cheering and clapping at certain parts).

Aside from that, they used really good actors.  The actors each had already been seen before in their current roles (except for one, The Hulk) and had already gained general acceptance of their portrayal. Ironman (Robert Downey Jr.), Captain America (Chris Evans), Thor (Chris Hemsworth), Black Widow (Scarlett Johannson), Jeremy Renner (Hawkeye), The Hulk (Mark Ruffalo) all brought their A-game to this production.  In the aftermath, I watched both the Ironman and Thor to gain better perspective on what led up to this and why some characters did or said certain things.  My issue at the end of the movie was not with the Avengers themselves but rather with the villain, Loki (Tom Hiddleston).  I felt that he was not convincing as a villain and that some of his actions wasn’t justified, maybe it was also because to me, he did not feel “evil” enough.  I have changed perspective on that though.  I watched Thor shortly after and realized that his character was built to act the way he did and many of his actions did make sense afterwards.  The cast was booming as usual, with the Avengers led by the character, Nick Fury (Samual L Jackson).  I can never expect a bad movie from Samuel L. Jackson (even Snakes on a Plane didn’t suck because of him).

So to wrap this blog up (since its taken me a few days already), cast was fantastic, technology (computer graphics, etc) was innovative.  The movie itself was compelling.  It definitely was an amazing adventure to go take part in: I laughed at parts, I was startled, I cheered and clapped.

It was a great way to start off the summer blockbusters! Lets hope that the rest of the summer will be as awesome!