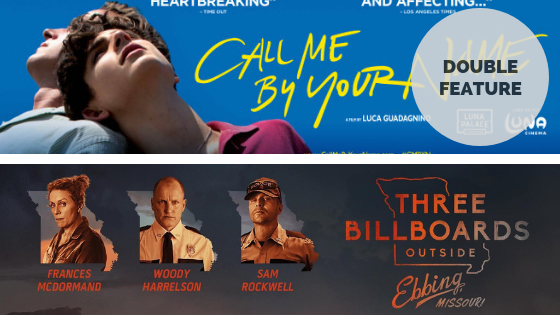 Call this a 2017 double feature and a drama as well. Two movies that got a lot of recognition and praise at the beginning of this year so its surely two well-matched double feature.

In 1980s Italy, a romance blossoms between a seventeen year-old student and the older man hired as his father’s research assistant. – IMDB

I’ve only ever seen one other movie from Luca Guadagnino earlier this year, A Bigger Splash. I’m going to be honest that this director has a very similar way of approaching stories or maybe its the stories that he chooses and the setting that distinguish it apart because while watching Call Me By Your Name, while the story itself is very different, there is this same feeling that I got as I was watching A Bigger Splash and that was before I realized that these two films were directed by the same person. I can’t say that the story itself is particularly unexpected but what works even better is that the story is made really great because of its cast who delivers some fantastic performances.

What this movie does a great job at doing besides yet again giving us a beautiful Italian setting and the love of filming in waterholes or pools or something or another like this (like in A Bigger Splash), is how Armie Hammer’s Oliver and Timothée Chalamet’s Elio deliver a powerful story about first love. One of the most powerful points here though is that it breaks barriers of how romance no matter what gender is still the same. Its as valid and the same for everyone. Oliver and Elio’s first love might be something they try to hide around the people around them which leads Elio to find also a romantic feeling with Marzia (Esther Garrel) and there he finds something different as well. There is a feeling of exploration and getting in touch with their feelings while also having that uncertainty and vulnerability of not being sure how much to show. There is a lot of depth to this story. It kind of is one of those stories that creeps up on us with every scene that in the end when we get the final moments between Elio and his father who has this incredibly touching speech and that final ending conversation with Elio and Oliver, it just tugs on all kinds of heartstrings.

Its been a while since I’ve seen Call Me By Your Name and yet, there is something so beautiful and so raw about how this whole story is set up and told from the details of the setting to the interactions that make this journey, especially for Elio’s first love that makes it so powerful. So many scenes resound in my mind and the story seems to just linger on.

On that note, I’m not exactly sure I’m into watching a sequel or even where this story can go, especially since that seems to be in the works but we will see, I guess. 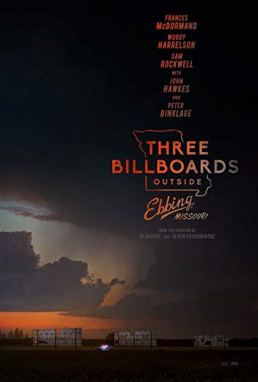 A mother personally challenges the local authorities to solve her daughter’s murder when they fail to catch the culprit. – IMDB

Three Billboards Outside Ebbing, Missouri is a film that I liked a lot. There is a nice mix between drama and dark comedy. Plus, the film is packed with fantastic performances. Between Woody Harrelson, Sam Rockwell and Frances McDormand, these three deliver on their characters. The story itself is pretty dark and in some ways, the drama behind it is actually quite heartbreaking to watch in the sense of how the case was treated and the pain of a mother trying to force some justice and action in a desperate way. Call it her way to find closure.

What I like the most about this film is how it is executed. The pacing and the way it is put together works really well. While Woody Harrelson’s character is incredibly dynamic to watch and one that has quite the impactful character where Frances McDormand’s character is more of the dramatic and gritty character, the character that stood out the most to me was Sam Rockwell’s character which had the most layers and growth in this whole story. The heart of the movie lies in these performances and the characters from its many different prejudices towards race, career and other elements. Its these prejudices that create these unnecessary aggression and what causes a lot of these situations that happen. There is a lot to talk about in this film and a lot of depth to the story and its characters which makes it so awesome and one I highly recommend.

Overall, two films that I enjoyed a lot!
Somehow its two that I think the experience of watching it overpowers anything I can say about it.

I’m sorry that Baking Through Disney project is on a slow start but I’ve been trying to get those adaptations watched.  It hasn’t been easy to find time to watch movies that aren’t expiring on Netflix.  Anyways, thats behind us now and those reviews will go up gradually. Another thing is that I’ve been avoiding watching Snow White and the Huntsman but here we are with another one that just got added on Netflix and its the 2012 live action adaptation called Mirror Mirror.  I’m a huge fan of Julia Roberts…at least her earlier stuff is great so I always remain hopeful. 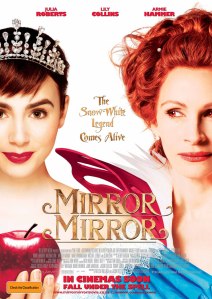 An evil queen steals control of a kingdom and an exiled princess enlists the help of seven resourceful rebels to win back her birthright. – IMDB

Live action adaptations are popping up everywhere.  Mirror Mirror came and went before I even knew about it.  It went by so quietly that I actually had my doubts about it being good.  Sure, there’s Julia Roberts and I like her but let’s face it, Snow White and the Disney version has yet to have a really good adaptation.  At least from what I’ve seen, they’ve all been pretty sad efforts.  But then, I only reviewed Asylum’s and I guess that’s the extreme bottom of the barrow.  I don’t know what I’m rambling about.  What I’m trying to say is that Mirror Mirror is an average movie and the plot is nothing to call home about but it does have some pretty nice settings and visuals, even the costumes are pretty to look at.  All those things are in its favor.  There’s some good and some bad with the characters also. 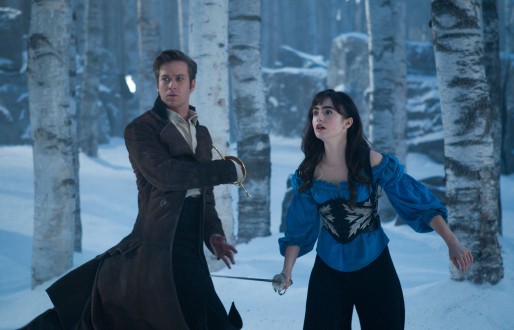 I wasn’t sure where to start with this since I’m a little indifferent to it but I think talking about Snow White and Prince Alcott (aka Prince Charming) is a good place.  There is no doubt that Lily Collins looks the part.  She’s a sweet looking girl and can pull off the nice and compassionate girl.  What most adaptations nowadays are doing seems to be making the Disney princesses into stronger women.  I applaud the effort.  Its a good thing and for the most part, Lily Collins does a good Snow White who learns how to be tough when she meets the dwarfs.  Her chemistry with the dwarfs might actually be more than hers with the Prince..haha! I guess that kind of is like the Disney classic, right? It was never about the Prince, was it? Now, our Prince here is a good looking dude.  He has some shirtless moments which makes for a few chuckles but is he convincing as the Prince? Hmm…he’s a little stupid.  Maybe he’s supposed to be, I don’t know.  Prince Charming was really all for looks, I guess and being Snow White’s happily ever after.

The more fun part to talk about are the dwarfs.  This crew are not miners but thieves in this version.  They walk around in stilts of sorts that reminded me of the Kurios Cirque du Soleil show I saw last year.  They are a really awesome addition to Mirror Mirror.  Almost all the laughs are because of them and they make it so enjoyable especially when interacting with Snow White.  There’s a lot to love about them and I would rewatch Mirror Mirror just for their performances.  These dwarfs may be a different spin on the story we know but they are a good and well-needed change.

The Queen here is played by Julia Roberts.  I hate to say it but this one was a little pathetic.  They try to change up the character in a way with the mirror is actually a magical dimension and actually the reflection of the Queen herself.  She’s superficial (as expected).  I guess continuity works here but I believe it was deliberate when they made that narrative by the Queen (or the Mirror) and then the English accent vanished and turned back into Julia Roberts own voice.  At least I thought it did in a few parts.  I wasn’t sure if they did it to make it funny or sarcastic but I personally didn’t like it all that much.  This Queen may be evil but she never felt that way to me.  She just tried to menace Snow White with her words but she’s kind of stupid and not really all that villainous.  That makes for this being the main reason Mirror Mirror didn’t quite do it for me.

Overall, Mirror Mirror has some pros: costumes, setting and the change for the dwarfs make it so entertaining and fun.  Snow White and Prince Alcott is a decent couple with a good enough chemistry.  Snow White and the dwarfs also carry some pretty nice chemistry and adds to the entertaining factor.  The cons however is the weaker plot which doesn’t quite feel like anything special. The Queen also is not all that villainous.  Mirror Mirror could be better but its not horrible.  Maybe its a decent choice on a rainy day.  Know this, the seven dwarfs will give you quite a good laugh 😉

Have you seen Mirror Mirror? Do you like Julia Roberts?