It took me a thousand years to get this done but I vowed to at least get this first one done by the end of the year, so here we are!  Sure, its not the cupcakes and fanciness but I finally got my baking stuff in order in a new kitchen set-up so it was a little bit of a mess. However, Snow White is all about poison apples so first choice would have been candied apples but it seemed kind of complicated with the syrup and whatnot so I opted for an easier but still unique idea for any apple dessert.  It pretty much came down to Tarte Tatin and Apple Charlotte both from my “Made in Quebec” Cookbook that I bought back in February this year.

If you’d like to read the review on Snow White or any of the adaptations, you can find it HERE.

APPLE CHARLOTTE
(from Made in Quebec by Julian Armstrong) 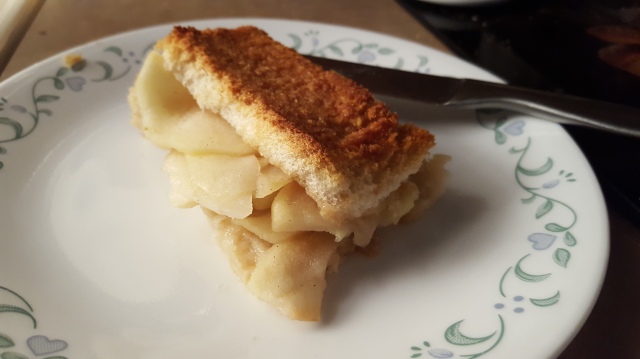 1. Slice apples thinly and place in a medium saucepan. Measure lemon juice into measuring cup and fill with water to make 1/4 cup liquid.  Stir into apples along with granulated sugar, butter, and cinnamon.  Place over medium-low heat and cook, stirring often, just until apples are tender, are 15 minutes.  Let cool.

2. Butter a 6 cup baking dish.  A baking dish with sides at least 3 inches high is recommended.  Sprinkle the bottom of the dish with a little brown sugar.  Butter the bread on both sides.  Then, dividing brown sugar evenly, pat onto each side of buttered bread slices.  Cute 2 of the slices in half.  Press a full slice onto the bottom of the baking dish; if necessary, add more bread slices to cover bottom of dish. Line the sides with the 4 half slices, pressing them firmly into place.

5. Bake, uncovered, for 30 to 35 minutes or until bread is browned and crisp.  Serve hot or at room temperature, with whipped cream or ice cream. 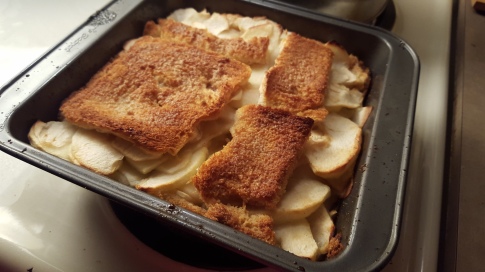 Notes from what I did:

Apple Charlotte has an interesting texture.  I’ve never had it before but the point is that its a dessert wrapped up in toasted, crunchy and sugared bread.  The seasoning of the cooked apples covers up any of the sugared bread. Its not a bad texture and I can actually see it working exceptionally well with ice cream or even maple syrup for a Canadian twist. I’m probably going to try that later. The apples do have a really nice taste and mixed with the sugared and crunchy taste was quite good.  I might prefer apple crisp or apple crumble pie or even straight up apple pie but its because of the fluffy pastry pie shells that I enjoy eating.

Have you had Apple Charlotte before?

P.S. I’ll be giving an update on how I plan to approach this with much more dedication in 2016 for the next Weekly Adventures on January 1st! 🙂