The past Sunday was an evening at my girl friend’s place for BBQ.  Her and her husband both provided the main meals and we each had to bring a little something.  As always, I never pass up the chance to bake.  I’ve been craving the opportunity to bake but with moving and Fantasia and work, it just didn’t fit in.

Usually, I’d flip through my crazy amounts of cookbooks and dig something out but this time, I decided to go search on the internet for Summer desserts for BBQ. Among a list of 10 recipes or whatnot, I decided on this one: APPLE BROWNIES!

Ever since I’ve become intolerable of chocolate, I’ve pretty much stayed away from brownies.  And before that, I wasn’t much of a baker so I never ate a lot of that anyways.  Either way, I’ve never heard of Apple Brownies.  So I was curious about how they would turn out.

Here’s what it looked it out fresh out of the oven!

Fresh out of the oven!

If you are interested in trying this out, you can find the recipe following this link:

Making Apple Brownie is pretty quick and simple.  The most time consuming part might chopping up the apples.  I did this all without an electric mixer and it still turned out rather well.  They asked for a 9×13 inch pan however mine is 0.5 inch longer and wider so the brownies were thinner than they asked for, I believe. However, it tasted pretty good.

There are a few modifications that were made to the recipe.

Compared to normal, the changes are very little this time.  It was a sudden decision so I didn’t even realize that I had ran out of these.  My mom bakes also, so it could be that she used the last bit and we never got around to replenishing it. 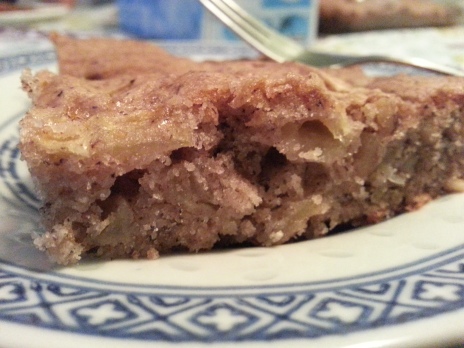 Despite the changes, Apple Brownie (or any fruit brownie) would be something I’d revisit.  Its soft and fluffy, fruity and just so delicious.  Brownies in general are in the sweet area so if you’d like to lessen the sugar that shouldn’t affect it much.  I thought it was a good balance.  This is a healthier option.

I just wonder what other variations I can make, such as what other fruits.  Maybe strawberry and rhubarb.  I’ve only done crumb bars for that.  Or maybe plums or peaches? I’m guessing something with a more solid texture.

Do you like brownies? Have you tasted any other than chocolate brownies? Would you give these a shot? Do you like apples (in desserts or simply as a fruit)?