Kicking off the first recommendation is from Ruth at Flixchatter who introduced me not only to the handsome and charming Richard Armitage.  You should click on the link for her up there because she did a fabulous post on him as a birthday tribute 😉 She also suggested for me to check out North & South.  Luckily I had already put it in on my list in Netflix and gave it a watch.  I thought it would be longer but this 4 episode TV mini series took me one evening to finish.  Lets check it out! 🙂

North and South is a four part adaptation of Elizabeth Gaskell’s love story of Margaret Hale, a middle class southerner who is forced to move to the northern town of Milton.- IMDB

Just to put it out there first, I’ve never read the Elizabeth Gaskell novel but its in my to-read after I saw this.  Although, I’m not exactly sure you need it to appreciate this.

North & South is easily one of the best TV mini-series I’ve watched.  The story was great and the characters was awesome.  It reminded me a bit of  Pride and Prejudice actually.  It had sweeping music and the atmosphere was fabulous.  Thats BBC, right? The scenes were done so well, starting with the cotton flying around as Margaret discovers who this Mr. Thornton is.

I always love to talk about the characters and Margaret Hale, played by Daniela Denby-Ashe threw me a bit off on the choice of her when the series first started.  She has this very simple-minded nature and very easily to form her opinions, which does change as the series goes on, especially when dealing with Mr. Thornton.  However, we always know that her intentions are always good, just sometimes when she doesn’t know the whole situation, maybe its not exactly as she thought it was. This is what makes conflict and interaction, right? She reflected her character as she should to match the other more intense characters. 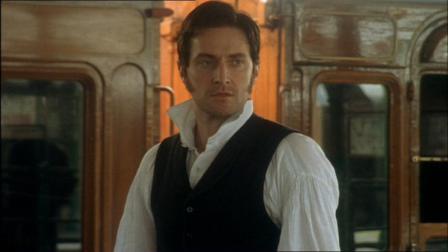 This leads us to who she’s *almost* always against and uses harsh words with, Mr. Thornton, played by Richard Armitage. Okay, give me a moment to breathe, ok? I had the hardest time not giggling searching up a picture to use for this.  That man up there is just too handsome, charming, and especially brooding in North & South as Mr. Thornton. Mr. Thornton may be a bit easily frustrated but you can see in his eyes, his admiration for Margaret and most of the time, I felt like he wanted her to understand him but it was like she never did and he would get hurt and then he’d become defensive.  The chemistry  he had with Magaret Hale was just awesome.  If not, the best I’ve ever seen.  I love you, Richard Armitage 🙂

Aside from the main characters, the rest of the cast was equally great in supporting the story.  Sinead Cusack who played Mr. Thornton’s mother was so great at being the protective mother who wanted tot he best for her son and felt that no one truly deserved him in a way.  The confidence and the care but yet her strong nature towards upholding his business and trying hard to help him out was all wrapped up in her solid performance.  Another character very much worthy of mention was Brendan Coyle as the leader of the union who carries out the strike for a better tomorrow for the cotton factory workers to get more benefits.  He made a lot of the situations very intense.

Overall, North & South was just great! I totally recommend it and honestly, I wanted to just say that everything was awesome and go see it and end it there, but I figured that would be too short 😉 Its romantic, Richard Armitage is handsome, the chemistry is great and there’s some intense situations also plus it has solid performances from everyone in the cast.  Its a fantastic mini-series which only takes 4 hours of your life.

A MEGA HUGE THANK YOU to Ruth for  urging me to watch this because it was just amazing 🙂 Remember to go check out her absolutely fun blog!

Have you seen North & South? What do you think of Richard Armitage? Are there any TV mini-series that you enjoy?