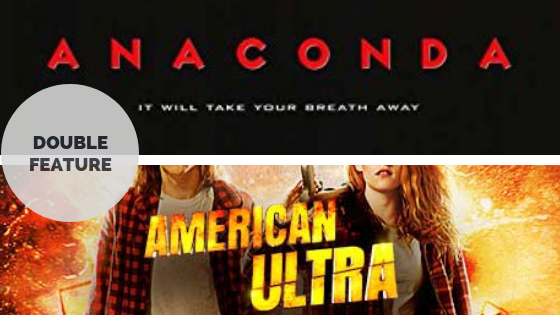 Welcome to this week’s double feature for a double Netflix A movie, Anaconda and American Ultra!

I’m back to my alphabet thing which I never tend to finish because I always start it at the beginning of the year and then Valentine’s marathon and the Ultimate Decades blogathon cuts in between and then I lose track. I’m hoping it will be more organized this year and things will work out. However, I do have some other double features lingering on the background so at least I’ll keep up with a weekly thing, right? 😉

Let’s check out these two! 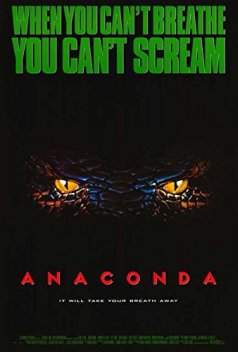 A “National Geographic” film crew is taken hostage by an insane hunter, who forces them along on his quest to capture the world’s largest – and deadliest – snake. – IMDB

I’m a huge fan of creature features. While I’ve been working hard to catch up on some of the older ones, Anaconda has been one that I haven’t caught up with until the last few months. To be honest, it was quite a disappointing experience. Perhaps its because it is awfully dated and the Anaconda doesn’t look too believable or the execution was paced fairly slow. However, if we put aside those little things it still works as a concept. There are other movies in the same subgenres who execute creature features in the same way and it still work. What works for it is the setting itself where this group is on the water in a boat going through unknown waterways and it works with the jungle environment and all the unknowns that pair with it. That is one of the few things that I liked.

My biggest issue with Anaconda is the cast. Put aside the other people who were tolerable, Jennifer Lopez is an actress that I’ve never found a movie where I liked and yet she constantly gets cast into films over and over again. It is mind-boggling to me but I’m sure there are others who appreciate her. However, her acting didn’t quite work for me here and it became very irritating to watch. The second performance who I, at times, do enjoy is Jon Voight who does an over the top villain sort of role who also gets very ridiculous at points. Just these two weaknesses and their frequency and importance in the film made this one really hard to enjoy for myself.

In fact, Anaconda isn’t a really lengthy film and yet it took me about 3 sittings to finish, which says a lot about how I feel about going back to visit this one again. 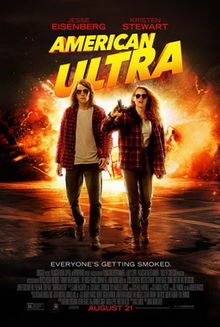 A stoner – who is in fact a government agent – is marked as a liability and targeted for extermination. But he’s too well-trained and too high for them to handle. – IMDB

American Ultra is a fun little action crime adventure. Its comedic and pretty well-paced, packed with lots of action and schemes. Its straight forward and just a lot of crazy. I think what makes this movie work is Jesse Eisenberg and Kristen Stewart. Jesse Eisenberg has his roles that don’t work (aka Lex Luthor) and then he has roles that works for him (like Zombieland and Now You See Me) and this definitely fits in the latter category. The premise is a bit far-fetched but in this absurd way that kind of works. I can see how it could be irritating to watch but then, there is this desperate connection between him and Kristen Stewart that works well. Talking about Kristen Stewart, I can’t help to feel that her lowpoint is definitely Twilight and everything else that I see her in generally works from good to great. This one works so well for her character. She keeps the film pulled together just like some of the other supporting characters does also.

On that note, John Leguizamo’s role was  meant to be absurd and it was so absurd that it was really annoying to watch (I guess they succeeded?). In my mind though, its sad to see me get annoyed by John Leguizamo who I like a lot and feel that he is unique in his interpretation of roles. I’m starting to realize that Topher Grace also ends up taking up roles that I truly dislike. Seeing as he is the “enemy” in this case, it felt like its good to hate him but he is so hard to like. I feel like whenever I see him in a movie always dislike his bits and this one is no different. Its the fact that I can’t quite to decide whether his roles are meant to be dark humor or if we are meant to take him seriously. Either way, those two are the lowpoints for me in this film that felt slightly annoying and disappointing.

However, the lowpoints here are not enough to forget about the sum of all the positives here. I can’t help to like a film that is so fun. It does have its dramatic moments but the film that I could compare this film to would be Mr. Right and they have the same vibe and tone that I like a lot.

That’s it for this double feature!
Have you seen these two A selections? Thoughts?