Moving right along with the Friday the 13th series, we’re on Part 2.

Friday the 13th Part 2 is the only one I’ve seen before and that was 2 years ago.  Lets just say that my memory is slightly foggy.  I only remember little bits and parts but as I was watching it, all of it started coming back by the end. I completely forgot how it all began so it was partially a new experience.

Lets check this out, shall we? 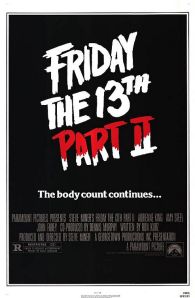 Five years after the killing at Camp Crystal Lake with the one survivor that has vanished after the events, a nearby camp reopens as a counselor training camp lead by Paul (John Furey) and his assistant Ginny (Amy Steel). On a night, half the camp counselors go in town to party before their training starts while the other half stays in.  The latter group ends up slowly being picked off one by one.

For those that wonder why I ended up starting Friday the 13th Part 2 first a few years back, it was really because I told my boyfriend to tell me which one he liked best and this was the one he chose.  So thats how it added into my intense horror.  To be fair, after that event, I changed it around because you can’t categorize anything intense until you give it a go (even if you are like me and get scared easily). 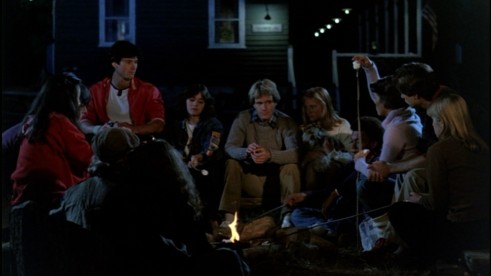 Watching this one this time after knowing how it started felt different because now there is some form of continuity.  Not sure you really need it but its probably why the first part where it flashes back to the ending bit of the first one (my referral of continuity applies here) passed over my head the last time and it was the part I completely forgot.  Weird, eh? So that beginning half, no memory at all.  Still, it kind of gave a bit of closure for the first one and set the stage for this Part 2. 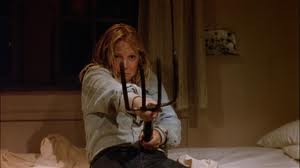 We all already know who the mysterious brutal killer is.  This time, its a rather silly group that is really still on Crystal Lake except they aren’t the same camp site.  The group doesn’t believe that there is anything dangerous as usual and they make silly (*ahem* stupid) choices.  Still, Part 2 is a bit more effective in the scare territory than the first one.  I definitely like this one more especially how it reveals Jason and just how he is.  Although, my boyfriend and I was discussing the ending of the first with the beginning of the second. and how it puts to question whether the girl in the first was hallucinating at the end, because if not, the timeline might not work quite so well, unless I got lost in the track of what was going on.

On the level of scares, although the acting is nothing to call home about.  Still, Jason in here is pretty effective especially since its the first one where he is the center of the killing and he still hasn’t gotten the famous hockey mask that he has later on.  Its somewhat of an origin story although we only know that the assumption is that he’s avenging the death of his mother.  I can tell you that there was a few parts that even though I guessed what would happen, the unknown timing of when it would happen gave me a few jumps (and shrieks).

Overall, Friday the 13th Part 2 is more enjoyable than the 1st for me. It builds the tension better and Jason is proved to be a worthy murderer and a great way to start his killing spree.  It sets stage hopefully for the continuation of the series. I can say that I was fully anticipating Part 3 🙂

What do you think about Friday the 13th Part 2? Do you think that it was effectively scary? Was it better than the first or did you enjoy the first more?